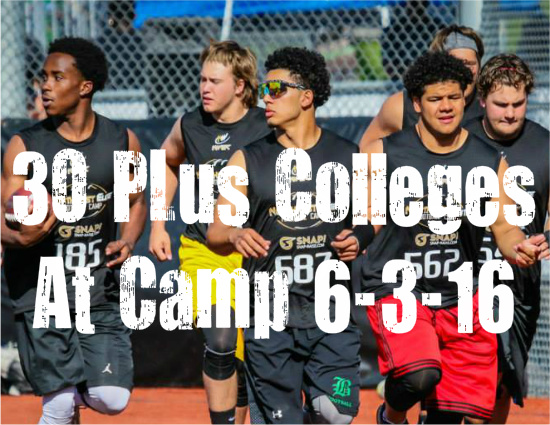 We just go off the phone with the boys at Northwest Elite Football Camp and things look to be heating up to a head for the big camp June 3rd in Seattle.  They believe that have 80 collegiate coaches lined up to be at the camp working with the NW recruits coming and kids are now confirmed from 11 States.  It has been the big show of all shows in the NW for college satellite camps and that is not going to change.  The Star Fire Sports complex will be the place to be for sure.

Boise State, Oregon State, UTAH, ASU, BYU, Idaho, Portland State, WSU, UNLV, MSU, Montana, EWU,  and most of the Division 2, 3, and NAIA schools are attending with others pulling the trigger too.  Thee are schools coming looking for recruits and that is an exciting thing indeed.  There is still time to get to camp so get to NWelitesports.com to register and read the precamp info story here.

We did catch up to current Co-Owner Mr Cole Morgan to ask about the camp, what people should know, and some highlights from the years past! Here is that interview:

1)  Cole tell us about this years Camp and how things are shaping up for the NWEFC which has the reputation of being the biggest camp of the year int he NW?
Things are shaping up to be as big as usual for us. We already have over 400 kids signed up and over 30 with the majority of their coaching staffs in attendance.
2)  What is new or different about this seasons camp and what should kids and parents expect comign into the event this year?
Camp was moved back to the Starfire Sports complex! The gold camp is back for the last hour of our camp, filled with the camps best performers- coaches and kids get hyped for it. Last year Tyson Penn made a one handed grab that ignited the camp.  It’s going to be great!
3)  What are you most excited about for the 2016 Camp?
I get excited about the energy that is created at our camps, the opportunity for kids to compete in front of coaches to fight for their own future. We also really love seeing the coaches coaching against each other- the coaches get after it. they are fighting for these kids and it shows.
4)  Can you run through some of the schools coming out to camp to coach the kids this season?
The usual suspects, UTAH, Oregon State, WSU and all of the other PAC 12 contenders. Also, the FBS powers like EWU. All of the coaches know where all the talent is on June 3rd!
5)  Being the first camp of its kind here in the Region what has changed in terms of these sort of camps and how do you look at the camps value now?  Still crucial?
We are excited to be the brand that College and high coaches know and trust in the region to be the biggest and best camp around, we have been around for over 8 years and helped hundreds of kids earn college scholarships. I was talking with a college coach the other day and he said, I tell kids one thing and that is: “If you’re going to be anywhere this summer, you have to be at the Elite Camp.”
I love hearing stuff like that because those coaches understand that we provide the most value for kids and families.
6) You are a former State Champion and Collegiate player Cole.  Your very involved in High School football and recruiting.  Having said all that how do you feel about where the sport is heading and in your honest opinion what should kids and parents watch out for in tersm of pitfalls if anything?
My high school coach is one of my best friends- he has always told me the truth, he has helped me understand that their WE is more important than me. If i were to give any advise to any student or parent it would be to trust your high school coach. Secondly, I would tell parents and kids to not get lost in the hype of social media, it can be tricky to navigate the sharks- but go with your gut, if it walks like a duck and quacks like a duck, then its got to be a duck.
7)  Looking back on the Northwest Elite Football Camp and all the success what are the things or athletes that stand out to you as the sort for successes you think represent the Camp and what it is intended for?
Easy, Jessie Sims and Nick Mitchel. Sims was a Montana kid who came out of nowhere and got a ton of offers and was a two year MVP. Nick, was a kid who was a part of camp crop of QB’s who had 6 go D1. Nick as a junior didn’t make it as an MVP but I was told by 3 coaches that day that they were offering him because they knew what type of QB he was going to be. Then their are the kids like Brett Rypien (BSU Starter), who vs, Nick were absolutely fighting for the last rep yelling “one more rep one more rep”. Last year Tyson Penn and Chase Claypool were battling like crazy. Penn made that one hander that I talked about earlier. I love seeing all of the big time recruits just absolutely fight and compete!
8)  Talk to me about SNAP, the sponsor of the camp, and how that organization helps athletes and their schools and teams?  It really is quite a story of success isn’t it?
Snap Raise is the WIAA fundraising sponsor, tons of the kids, coaches and families use their platform to raise money each year for the causes that they care about. Snap Raise is the nations leader in online fundraising and has help teams raise millions of dollars for whats most important to them. If your teams need money and are sick of the same old tired fundraisers, Snap Raise is the obvious choice.
Body Armor is also the ELITE Drink sponsor of the camp- they fuel the next generation of athletes- the next gen starts at the elite camps.
9)  Any parting thoughts?  The Camp is June 3rd – what else should people understand as they prepare for this event?
Campers from over 15 states have already signed up, we are limiting space this year to 700, we already have 480 kids signed up, we don’t want to turn kids away this year like we have the last two years. Get registered asap!
I guess the kids and parents should know that the coaches are fired up to be here, so if the kids aren’t ready to compete like they never have before then this probably isnt the camp for them. Its time to BE ELITE!