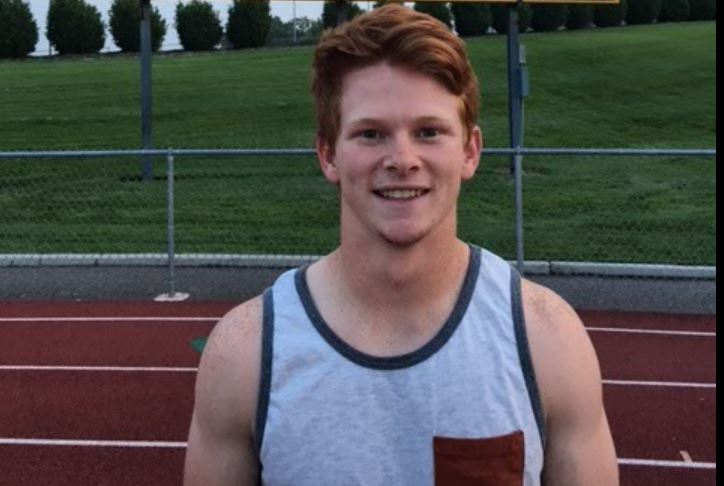 946
SHARES
ShareTweet
Get The Latest

To be a good athlete, I think you must have confidence and on some level, you should have a chip on your shoulder.  Well, the young man I met with the other night possesses both of those items.

Adam Weissenfells is a 5’ 9” 160lbs. Class of 2018 WR/DB from Richland High School in Richland, WA. Adam was named a FIRST Team All-League selection as a cornerback from the Mid-Columbia Conference last year in his junior season. He is a three-year starter for the Richland Varsity Football team. Weissenfels also was named to the NWPR 2017 Preseason Top 5 Defensive Backs for Eastern Washington list.  Adam is an outstanding baseball player as well, being a three-year starter on the Richland Varsity Baseball team and is a THREE YEAR All-Conference selection in baseball. Another part of Adam’s overall package that will have college coaches falling in love with this kid, is he is basically PERFECT academically. He has a 3.99 GPA (yep you read correctly 3.99 GPA) and a SAT score of 1350 (two-part score). A lot of doors are going to be opened to this guy over the next 6 months or so. When I reviewed Adams junior season highlight film, the things that jump off the screen to me are = he is fast, quick and physical. On film as a cornerback I see a player who has very good hips and can plant his foot in the ground and burst as a DB. I also see a player who plays with a great amount of physicality on defense. Adam told me, “I watch a lot of film of opponents to pick up on tendencies pre-snap and I have a very good football IQ.” That was evident to me while watching his defensive highlights. On offense, Weissenfels is a great slot receiver. He is a very good blocker as well. Adam’s speed and electricity is on full display at the 4:58 mark of his highlight film (I have attached the link to his highlight film at the bottom of the article), where he catches a short pass and crosses the field and outruns the entire team untouched to the end zone for a TD.  Play #1 of his film is unreal also, it is a punt return and I am not even going to comment on it I am just going to instruct you to watch it for your own pleasure and enjoyment.  Bottom line Weissenfels is a very electric player!! Shoot, he is even the kicker for his Richland team as well. He does a little bit of everything. The praise even came in from his teammate Josh Mendoza, who is a flat-out stud in his own right, Mendoza said, “one thing about Adam, is that he plays “BIG” on the field.” I saw exactly what Mendoza speaks of on Adams film.

The family bloodlines are very impressive for Adam. His father, Bob Weissenfels was a two-sport athlete at The Naval Academy for both football and track and field and his dad also was a member of the 1992 Olympic Bobsledding Team (one of Bob’s teammates on that bobsledding squad was none other than Hershel Walker, the former NFL and college football great). That is some great bloodlines to have. As I said in the first paragraph, I think it is important to have confidence and a chip on your shoulder as an athlete. Well, when I met with Adam at legendary Fran Rish Stadium a few nights ago I was so very impressed with what this guy has inside of him and the way it permeates off him. Adam is a player who has TONS of confidence, but it is in a good way, he is not arrogant at all. He is just a guy who believes supremely in his teammates and himself and he is not afraid of anybody and he wants to compete against all comers.  Adam said to me, “I have a chip on my shoulder! I feel I am better than anybody I get on the field with, regardless of “offers”.” I love that mindset. That is how a competitor should think when he steps into the arena to compete.

When I asked Adam what it means to him to play for a great football program rich in tradition and to have the chance to experience playing for a State Title as a junior like he did last season, Adam’s answers gave me goosebumps. He said, “I didn’t grow up in Richland, I grew up all over the world as a military family. But now that I have lived in Richland I have realized one thing and that is that all the other high schools hate Richland HS and there is nowhere else I would rather be. I love being in this city and being at this school. I am so glad that everyone hates me for being a Richland Bomber. To be honest, I would rather win a state title for my teammates like Josh Mendoza and all my other friends on the team and all the people in the bleachers and my classmates, than I would want to win for myself because that is how they have all treated me here.” I literally got chills when I listened to Adam give me that answer and I could tell he really meant it.  This is a special young man. I would be so honored to be a teammate of this guy. The kid is a born leader.

On the recruiting side of things, Adam just updated me the other night and said he received his first offer so far, it was from Hamilton College, in Clinton, NY. While Division 3 schools can’t offer athletic scholarships but they do offer a lot of money for academic scholarships to GREAT students. With Adam being a 3.99 GPA and 1350 SAT guy, I think he will be just fine in getting most if not all his college education paid for by scholarships (athletic and/or academic). Adam also said The Air Force Academy has shown some interest in him by reaching out to his head coach at Richland last winter and then followed that up by coming to the high school last spring to evaluate Adam in person.  Adam spent time this past summer attending football camps at The Naval Academy, Yale University, Princeton University and that led to half of the teams in the NESCAC Conference developing a strong interest in Adam. Montana State University has also shown some interest in him also.

When I left my meeting with Adam and I watched him drive away from the parking lot I had a thought come to my mind. As a football coach for the last 10 years, and then over the last month and a half meeting with high school players and writing articles about high school players for NWPR, you naturally want the best for every kid and the harsh reality is that it doesn’t work out the way you wish it would for every kid that you get involved with. That often leads to thoughts of “what if” and “I only wish things could have been different for him”. Well, the thought that crossed my brain as Adam drove off was, “man that kid is golden, that kid could do whatever he wants to do and will be completely successful at it, no matter what it is. That is one kid we don’t have to worry about.”

Adam, I am proud to have met you and I thank you for allowing me into who you are as a person. Go have a great senior season with your friends, and family.

Here is a link to the hudl highlight film for Adam Weissenfels: