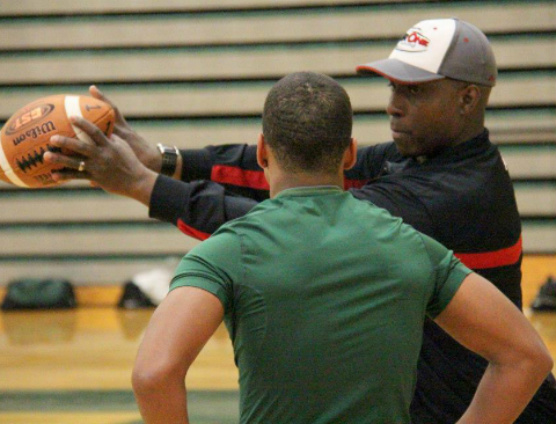 Well folks it is the off season for football and hey, let’s face it, there is no off season for many.  As soon as the pads come off the no-padded camps start.  Over the years we have covered, coached at, and attended every off season camp it seems.  In Oregon there are a few choices and one that has stood out to me over the years is the Air One Football Camp run by former PSU Viking 1st Team All American Quarterback John Charles.

Coach Charles has that X Factor when it comes to coaching your kids.  He teaches at eye level, spins the positives, and never hypes the kids.  Facts are he is the most accomplished former QB Coaching in the Pacific Northwest and has a unique teaching style that he brings to every camp session.  His services have been called upon by athletes and there parents all over the USA and he regularly flies out to train individuals and small groups. He is also a regular at the Elite 11 regional events as well as the Nike Camps and the Opening and he has worked with many current college stars and NFL greats.

The other admirable thing about John is that he won’t hype your kids up.  He coaches each kid the same.  Stars are given no special treatment and all are welcome. We have seen him just keep his eyes on the kids and their mechanics and development and it has paid off for many many athletes.

Quarterbacks and all skill positions come out to Air One Football on the weekends and the young guns get to train and then the High School kids.  Often the groups work together and there are many opportunities to work out and develop top tier skill.  Check out our Interview with Coach Charles below and a great couple of Videos that take you into the camp.

2 years of training in the making! Quaterback, Paul Hurley traveled from Detroit, Michigan to Portland to get work in…

Athlete Of the Week Feature

Let’s Go a little deeper with the the Coach and see what his take is on a few things in particular.

NWPR:  Coach how are things going and what is up over at Air One Football this year?

JC:  Camp has been great this year. Players are getting tons of reps and aren’t just another number in a long line of their teammates and friends. The competition has increased and our players are seeing results.

NWPR:  How can kids benefit from attending Air One and what are your core philosophies about training?

JC:  Kids can benefit from attending Air One because they are getting reps. They are not standing around. They are being pushed by experienced coaches who have been where they are trying to go and that’s to College and the Pros. Our core philosophies are to do the first rep slow and correct and then speed up. Alot of players go so fast on reps and drills and do them wrong. And then when its time to go actual game speed, they are doing footwork and football movements wrong. We want our players to process reps mentally then do them physically. It’s been a huge difference for our players developments. You can see their confidence and play-making abilities go through the roof.

NWPR:  John you were an All American and set records in Junior College and at the Division 1 level- looking back how have things changed with this game and recruiting and how are things the same as when you came through?

JC:  The game has changed a lot from when I played. Most players are bigger and faster now. Camps are year around now so players are a lot sharper and in better shape. They definitely pass the eye test when it comes to drills. Some players now-a-days think that just because they go to all the camps, have college offers, throw pretty spirals, run great routes and do ladder footwork really well, they believe that they are the automatic starter on their football team and do not have to compete or work hard for the job. Some believe that they are entitled to a scholarship to a major university when they can’t even get All-League or All-State in Oregon and Washington, but they want to go play D-1 football at the highest level. Where the game remains the same is they still have to perform on Friday Nights when the pressure is on. What I mean by that is players have to compete for the job and have metal toughness as a result. They have to make good decisions in high pressure situations and must be coachable in the process.

NWPR:  Wow great stuff Coach!  So let’s wrap this up with a final question.  Who are your mentors and guys who have influenced you as you moved from being a High School player until now?

JC:  My mentors are my former Junior College coach, Marshall Sperbeck, former College coach Al Borges, and former college and professional coach, The Great Mouse Davis. I’ve learned so much from these coaches about how to play football, teach football and study football. I’ve also learned more about life off the football field from these guys. They’ve instilled in me that Football doesn’t last forever and that I needed to do something that I absolutely love on a daily basis and figure out a way to make a living doing it. From that came this passion and energy which could be seen by the most important people of them all; The parents and the athletes that I am coaching.

To Catch a session with Air One and John Chalres and his staff check out AirOneFootball.com. John is scene here with his friend and fellow Atlanta Falcon the great Chris Miller. Coahc Miller is the Head Coach at West Linn and is a former Duck!

Catch a Camp and Get Some Work in at AirOneFootball.com held ever weekend at Lewis and Clark College.