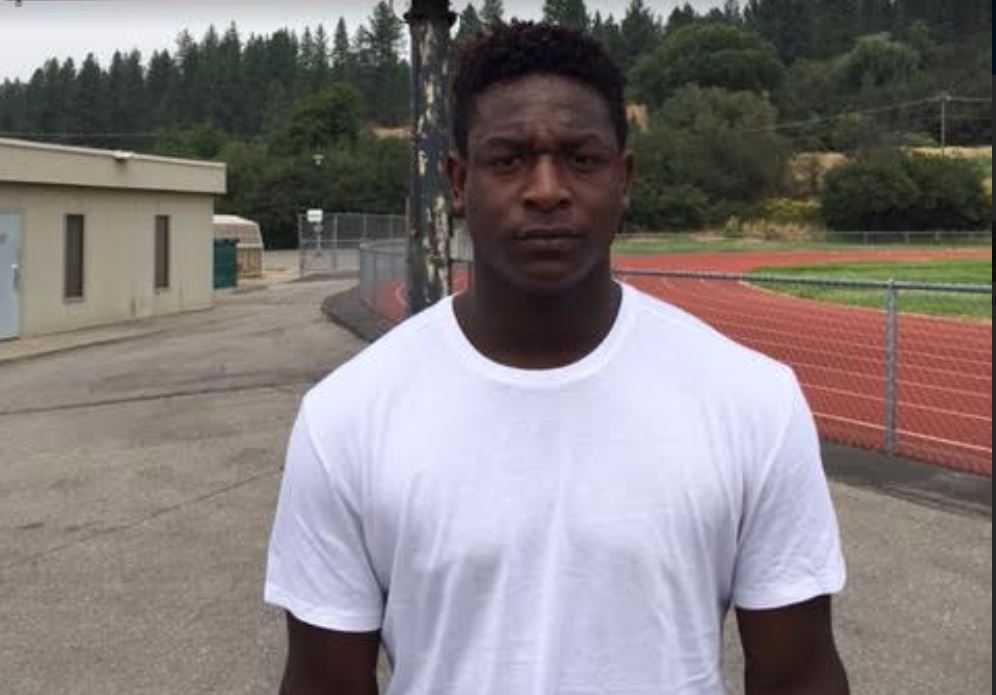 158
SHARES
ShareTweet
Get The Latest

Editors Note;  Story After story we are finding athletes no one else has covered yet- we are the best at finding the guys who will be or can be the next big thing.  Coach Demian Walter has found another one right here for sure!  Contact us- this is what we do!

In this age of football, it seems less and less kids want to play running back anymore. It seems like most want to play wide receiver now a days. That is certainly understandable for many reasons. There is nothing better though to me than watching a talented and gifted tailback with the ball in his hands and the electricity that is produced on the ground.

Aledre Bracey, a 6’ 0” 205lb. Class of 2019 RB/DB from East Valley High School in Spokane, WA. is a very young talented tailback and the best news of all on this two-sport stud (varsity basketball and football) is that he has two years left at the high school level. Aledre was a First Team All-League selection at running back from the Great Northern League last year as a sophomore. That is a great honor for a sophomore in any conference and as I have learned this summer, the GNL Conference is littered with extremely talented football players so for Aledre to be a first team All-Conference selection as a sophomore is an indicator of how talented he is.  Aledre also was named to the NWPR 2017 Preseason Top 5 List for RB’s for Eastern Washington.  This young man is a great athlete and as I learned in my one on one session with him, he is a well-spoken, polite, engaging young man who is oozing with potential. When I reviewed Aledre’s sophomore season highlight film (I have attached a link to his hudl highlight film at the bottom of the article), I see a player who has all the characteristics of a good running back. He has really good size, his game speed on film is straight up legit, he does not go down easily and is a good threat out of the backfield as a pass catching threat. On defense, I also see a guy who plays with a physical presence and could develop real nicely into a college safety or possibly even an outside linebacker. If you watch his hudl film you will no doubt be just as impressed as I was by the speed, electricity and long runs for UNTOUCHED TD’s repeatedly throughout the film. My favorite play, however, is at the:47 mark of the film because the play shows something all good running backs must be able to do. A good running back must have good vision, he must be able to plant his foot in the ground and make a cut and then have a burst. When I saw this particular play on film my mouth dropped to the floor because it demonstrated all those things. As I continued through his film I kept saying to myself out loud, “Wow! Is this really his sophomore season highlight film?” That’s how good it was!!!

One thing that I am always interested to learn about athletes is what are their family genes like. I learned that Aledre is the cousin of Eric Coleman, who played at Lewis And Clark HS in Spokane and then went on to play at Washington State University, which led to a 9-year NFL career as a starting defensive back for the New York Jets, the Atlanta Falcons and the Detroit Lions. That is some impressive family ties indeed.

As I spent time getting to know Aledre one on one, I asked him what are his core beliefs about commitment to a team and his answer was interesting. In this day and age of high school sports where players are transferring to other schools for varieties of reasons, I found his response refreshing.

Aledre said “I have a lot of loyalty to East Valley High School.  Coach Adam Fisher is like a father figure to me. I had a hard time growing up and Coach Fisher has really been a great role model for me. Other high school teams have talked to me about transferring to their school and telling me I can have a certain spot on their team but I am loyal to East Valley because this place is like a family to me.” Wow! I am proud to hear that answer from a 16-year-old kid.

On the recruiting side of things, it is just getting started in the earliest of stages because as I mentioned earlier Aledre has not even entered his junior school year yet, so college coaches cannot call him until late spring of 2018.  Aledre has received some initial interest though from some division 1 schools, such as Georgia Southern University, Liberty University, Ohio University. The University of Virginia from the ACC Conference has shown initial interest in the manner of calling Aledre’s high school coach to inquire about him.  With the elite level of talent that is at East Valley High School at the skill positions for 2017, I think there will be many college coaches stopping by the school in December and January and then next May to get to know a lot more about Aledre Bracey.

After what Aledre did as a sophomore last season, it is really exciting to anticipate what he is going to look like as a junior this season. When I asked Aledre what he felt his best attributes are that he brings to his team and to the game of football he said “I bring ENERGY to the team. I pick other guys up. When our team needs a big play, I feel that I am a guy that can step up and produce big plays to energize our team.” Those are definitely the kind of players you need to have when the going gets tough. My entire meeting with this young man was a very positive experience for both of us. Aledre was very open, honest and even receptive to advice during our discussions. It was inspiring to me to sit down with him and listen to him talk and let me in as to who he is as a person. I am a big Aledre Bracey fan and I think the sky is the limit for this kid and I think he is poised to explode over the next 12 to 15 months.  I wish all the best to Aledre in football and in life as he continues along on his journey and navigates his way through.

Here is a link to the hudl highlight film for Aledre Bracey: