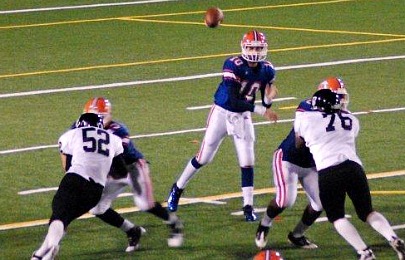 One of the newer schools in the Puget Sound is Auburn Mountainview High School.  A beautiful campus with all the modern conveniences. They have a beautiful performing arts center, a state of the art green house, science labs and art classrooms, and a football facility that is par excellence!  But up until now they have not produced a lot of wins up there.

But this season has been different under the very capable leadership of new Lions Head Coach Jared Gervais.   Some people during this past Summer worried that Gervais would not have time to prepare as the school went through a coaching change.

That and the fact that Jared is only 25 years old; the youngest if not one of the youngest Head Coaches in Washington.

But that has not even phased the nephew of former Skyline High School Coach and local legend Steve Gervais.  Coach Gervais has taken to the job like a duck to water; or maybe better said “like a Lion to the Savannah”.

Implementing the popular shotgun spread offense gave the Lions a chance against bigger more experienced teams.  But having talent in the program to plug into that offense has made the Lions an explosive adversary leading to their 5-2 record.  A record which they take into the big game tomorrow night against the 30th ranked team in the Nation in the Lakes Lancers (7-0).

The Lions are led by Junior QB 6’1″, 180 Pound Domenic Rockey.   He is a great athlete and has done a superb job of spreading the ball around the filed to a fleet of talented receivers.  To date Rockey has had a total of:

He has thrown 8 Interceptions but hey that is often what Juniors do.  They also tend to mature and learn to make better reads.   That will only  improve with time.

Skylar White is the leading receiver for the Lions; Photo J. Lacey

The receivers he has to work with include Senior Skylar White (600 plus yards, 3 tds, 13 ypc), Junior Devin Bryant (455 yards, 3 tds, 16 ypc), Sophomore Joey Cassano (295 yards, 3 td’s, 13.5 ypc), Junior JJ Lacey (215 yds, 1 TD, 12 ypc) and a host of others.  They are young and talented and appear to be the beginning of something very good up on the hill above Auburn.
But no true spread team can be effective without a true threat to run and the Lions have found that in 5’11”, 200 pound power back Victor Korchemniy.  The fast bruiser has blasted his way to 770 yards, on 126 rushes.  Victor has added 12 TD’s of his own and is a load to bring down.
In the loss last week to 7th ranked Peninsula Victor rolled for 166 yards and 1 TD.  He is also a top defender and has 41 solo tackles and has added 19 assists for a total of 60.  He also has tallied 1 fumble recovery and 2 pass deflections.
So Coach Gervais has himself a talented bunch and they are enjoying every minute of it.
“He is a great Coach.  Even tempered.  Not too soft and not too tough and he is smart,” offered QB Rockey who says this year has been something he and the Lions have worked towards for years.
What does it mean to win on the grid-iron?
First year player JJ Lacey decided to come out late in the Summer after seeing that this could be a year of successes.
“Things are great.  I love playing receiver and am glad I have been able to help the team.  The best thing though is that we are learning to win.  To see ourselves as a school that can and will be winning games.  Changing that mindset is the best thing that has come from this year so far,” said the thoughtful Junior who has already earned his bones on the Hardwood.
A place he hopes the winning ways spill over too.

They are looking like a solid play off contender and Rockey and Korchemny are both on the leader board for in-state  passing and rushing in 2011.   Now Lakes coming in to play is walk in the park but the boys seem ready and excited to have the opportunity.
An exciting thing to see a new school find success.  They have a young and energized staff in place, a great school and athletic complex, and a talented group of athletes.  All the things needed to build a winning program.

WashingtonPreps.com and NWPR will be in the House at AMV for the game tomorrow night in a Thursday Night special!  Look for photos and additional coverage as well over the weekend.