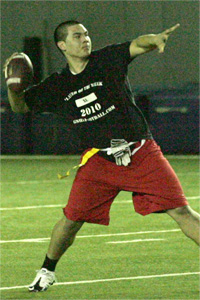 Northwest Stars Make Stop AT PSU On Way To Vegas

The Badger Sports New Level Athletics Elite 7 on 7 event starts today at UNLV. The event is always loaded with talent and the Oregon and Washington squads are once again being sponsored by Barton Football Training and NEI Rating service. We had a chance to see 28 of the best athletes in the Pacific Northwest train last week as NEI Team North and NEI Team South showed up at Portland State University to make use of the practice field at the Stott Center as they prepared to head to Vegas. In fact the Teams are all up there today and tomorrow and coverage on that is surely coming.

Northwest Stars Make Stop AT PSU On Way To Vegas

The Badger Sports New Level Athletics Elite 7 on 7 event starts today at UNLV.  The event is always loaded with talent and the Oregon and Washington squads are once again being sponsored by Barton Football Training and NEI Rating service.  We had a chance to see 28 of the best athletes in the Pacific Northwest train last week as NEI Team North and NEI Team South showed up at Portland State University to make use of the practice field at the Stott Center as they prepared to head to Vegas.  In fact the Teams are all up there today and tomorrow and coverage on that is surely coming.

Many of these athletes are rated at the Top of Recruiting lists and by attending events like this they are getting an opportunity to stand out even more.  Those with D1 Offers are noted in brackets.

We caught up to some of these guys and posed a set of recruiting and football questions to them after the big day at PSU. The teams scrimmaged each other for a couple of hours and got a chance to see the Vikings Campus and meet with the PSU Coaches too.

Here is one play with a longer video coming out soon from the PSU Event where there were some great moments:

" Team Oregon has been great competing with great athletes like Connor Strahm and Dallin Leavitt. I feel I'm improving a lot. PSU and unlv are more interested it seems now because of this. Competitions have been great because I feel I'm gaining skills that will reflect on the field in the real season. Team Washington was a good group real athletic and plenty of cool characters on the squad. I got to talk to the coaches and I feel like the program is building into a real franchise that will consistently powerful in their division for a long time,  they stay towards the top of my interest because of this. No offers and no clue yet."

"The top schools right now are Oregon St, Harvard, Cornell, Princeton, PSU, Oregon, BYU, and a few others.  The experience thus far with team Oregon has been great. Everyone on the team can ball, and we're all committed to the goal of winning this Badger 7 on.  My favorite part of the 7 on has been the high intensity competition that's always brought. Everyone comes to play, and it's great knowing that you're known amongst the top players in the NW. Team Washington's a good team, and they can ball. It'll be fun to see how deep we both go in the tourney. But you can be sure that both Team Oregon and Team Washington will rep the NW well.  This was my second time talking to the coaches at PSU, and it's very clear that they have a great program there. The staff is great, and the values they work to instill are very good.  I don't have any offers yet, but there are a few that are close in Oregon St, Portland St, and BYU.During the rest of the offseason, I plan to hit up the Nike NFTC camp, along with the Oregon, Oregon St, Harvard, and Cal Berkely Camps. I'm looking forward to getting my name known, and getting on that national stage very soon."

"Team Wa has been awesome because it really shows the talent the NW has. also getting to meet all the players on the team has been a great experience. they are all cool guys! We feel we have something to prove being from the nw and we will just go out and show people how we do it up here.  Team Oregon is fast!  They were a great team and it was great playing them. i know a few guys on the team and hopefully will get to know more. Yeah i got to meet the qb coach, head coach and assistant coach. they are definitely turning that program around and it should be exciting to see what they do this year."

"The experience on this team has been great and goes to show that any bunch of guys can click together and be good together. This has helped me play at high levels at all time doing what i love to do. I have not had an ample amount increase in coach attention but it has definitely helped and i know that there is more in store that is soon to come. My favorite part about the 7 on 7 competitions is the exposure, competition and the learning experience this brings to me. Team Oregon was a good bunch of athletes and presented a level of physicality and competitive nature almost like noother and they really helped us to see an example of how Vegas will be. Yes i got a chance to meet the PSU coaches. I believe that PSU is a great campus with a phenomenal staff and great down-to-earth players. I think PSU would be a great fit for me they made me feel as if I was at home."

We will have more interviews for you over the weekend as well as updates on how the weekends events go up in Las Vegas.  These events just keep getting bigger and bigger!

Here are the interview questions that we asked of the players:

1: What is your height and weight?

4: Tell me about Team Washington and what this experience has been like? How has it helped you? Have you met any new Coaches or recruiters through this and has this helped with getting noticed by colleges?

5: What is your favorite part of 7 on 7 and the competitions so far?

6: How was Team Oregon and did you have a chance to get to know those guys too?

7: Did you get a chance to meet the PSU Coaches at all? How do you feel about the program there?

8: Who all, if anyone, has offered you? Is anyone close to doing so?

9: What is next for you? It is March and you have from now until July to stand out. What is the plan for you?

Born to Play Inside: The Michael Kluge Story
Northwest Best Fight To Stand Out At Loaded Seven On Event