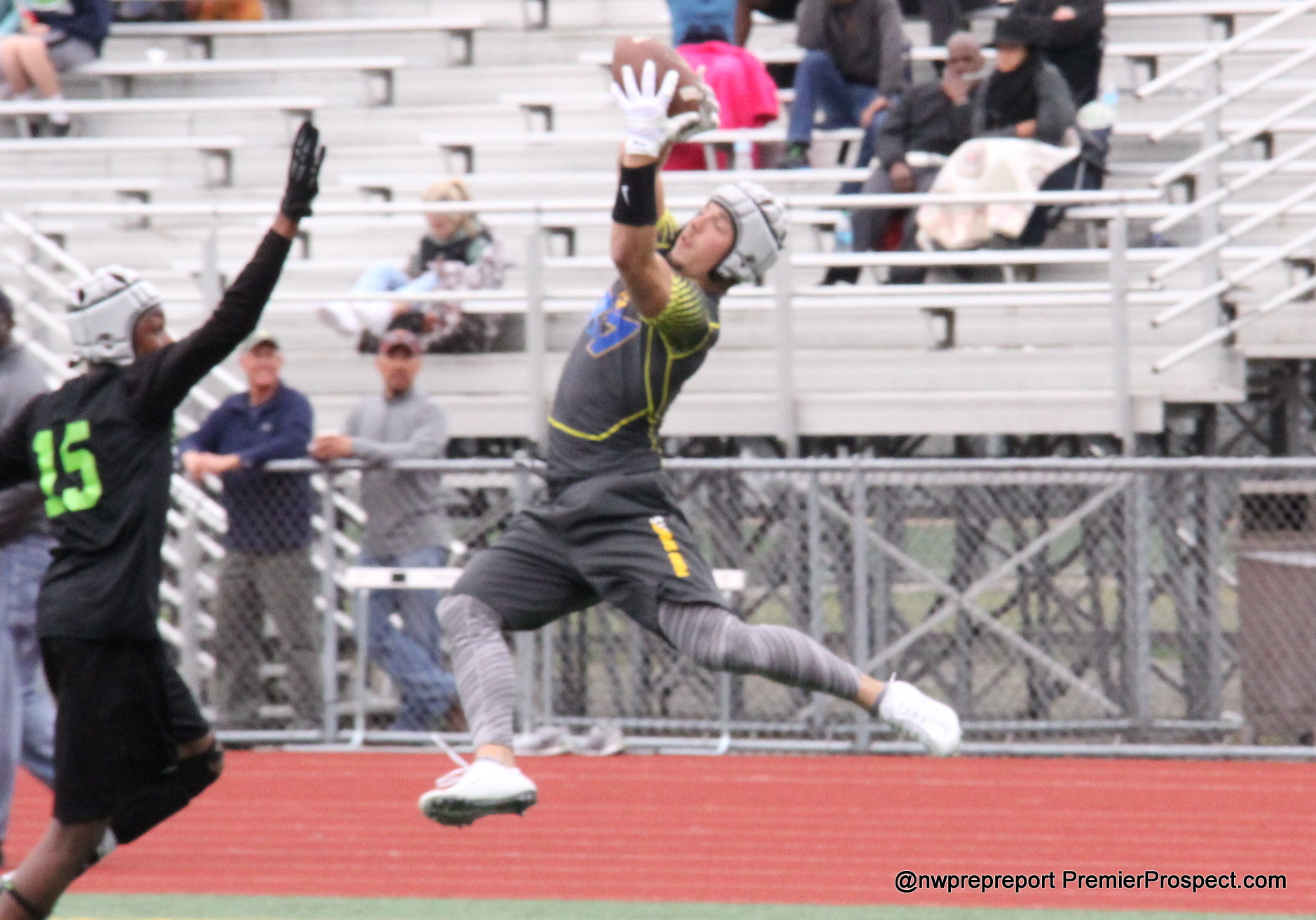 Earlier today we posted the story on Chase Claypool, the massive WR from British Columbia, who had an MVP showing last Sunday at the Battle For Seattle, confirming why schools like Oregon and Michigan have offered him. He was not alone however  as the camp provided a glimpse at many of the NW best of the best.  In fact there was SO MUCH TALENT there we can not cover it all in one story.

So here is part 1 of our look at some of the best talent in attendance and who rose to the top of the heap.

Hunter Bryant from Eastside Catholic made our All Camp team at the Tight End spot. This guy is only a Sophomore and at 6’3″+ and 244 he is a beast!  We see multiple offers in his future.

Westview’s Jason Rucker is an All Camp Safety. He is looking at his first offer still but that appears to be fairly close.

Juanita HS Star Salvon Ahmed – 2017 – was an All Camp showcase performer at the DB position and with multiple D-1 & Pac 12 offers he was the best 2 way guy at the Camp.

Another 2017 kid that has a full array of skills is Sumner HS Connor Wedington; this catch landed him a TD and was one of the best of the day hands down.

He is the best in the Nation and that is all we can say about that. The young man from Lake Stevens, QB Jacob “Skinny” Eason  is just that good! 2016 commit – Georgia Bull Dogs! All Camp QB!

Davis Alexander Gig Harbor – He won the overall MVP on the day and with good reason. The Tides won the tourney and Davis coached the team, ran all the plays, and boy can he throw the football. Complete football player and a recruit to note!

Riley Krenz Lake Stevens was the most consistent guy we saw all day in the slot and receiver spot make play after play- Riley has a lot of offer any collegiate team.

What a monster Jacob Kizer West Salem is! 12 offers – he was fun to watch!

Isaiah Gilchrist of Bellevue is Mr “Lockdown” and proved why his Pac 12 offers have him rated as a top DB in the West!~

Andrzej Hughes-Murray of Federal Way was a Force at LB making it hard for anyone to do anything against Team FSP in the middle. Intense and such a great leader!

Trevon Shelton (Left) of Bellevue Football got our vote for top DB during many games; the young man is fast and tall. He has a shot to do some great things moving forward.

Darien Williams was impressive in route coverage and he posses a huge match up issue for most HS WR Guys.

How does a Freshmen end up looking like a Senior? I will leave that one up to other folks; but rest assured this young gun looks like the next big thing at the QB spot and at 6’4″ he was poised, on target, and leading! Jacob Sirmon of Bothell who is going to be Big Time if all goes well.

Tahoma High stud Amandre Williams is a fine QB. But my goodness as a TE or DE he is special!

Also from Westview HS we were glad to see Samori Toure who made a TD grab against Ahmed that was one for the books. The kid is known for 1 handed and impossible catches and he is not letting up! Collegiate athlete no question!

Tumwater pure athlete Easton Trakel has an offer from MSU and more coming in. To understand this guy you have to watch him up close. He is all on all the time and was on the Day just superb!

There are another entire set of top athletes we need to cover from this event – on the day these were the guys that stood out the very most to our staff.

Look for more coverage of this event and live coverage from the Rose City Rumble which will be going on this weekend in Portland.