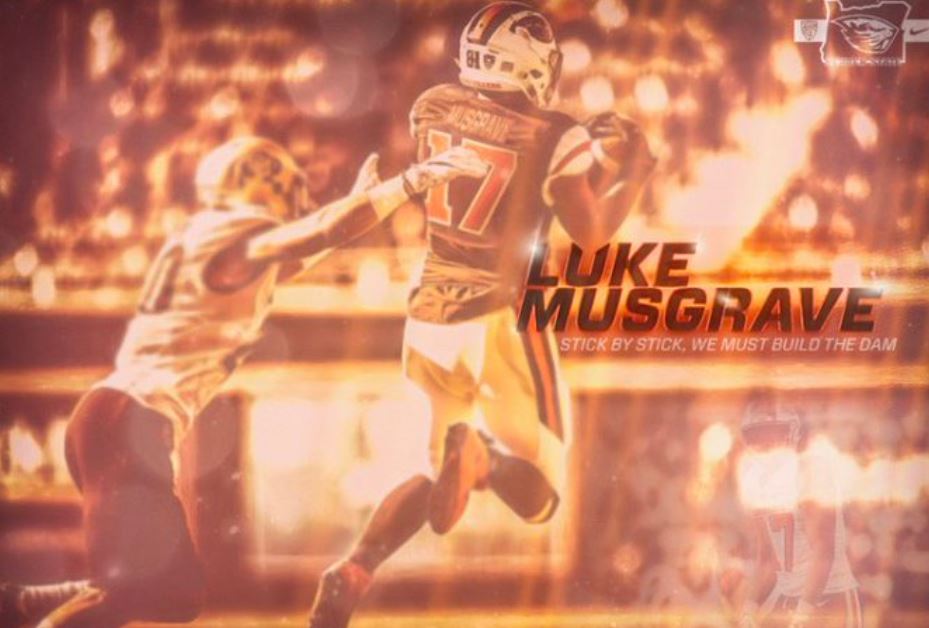 136
SHARES
ShareTweet
Get The Latest

Jonathan Smith, Head Coach at Oregon State, is doing the one thing he has to do to get the Beavers back on track.  He is going after the best kids in the State of Oregon!  Smith, who we have known for a long time, understands what it means to win and that starts with recruiting the boys from the State of Oregon.  There is perhaps nothing more “Oregon” than Oregon State.  No disrespect to the Oregon Ducks.  When I think of the land we live in of tall timber and majestic rivers and mountains, I also think of Oregon State.  The campus and the image of OSU is decidedly a NW feel.  It is traditional and has that timeless look that so many of us associate with the collegiate experience. Yesterday the Beavers landed the pledge of 6’5″- 225 lb.  fast mover Luke Musgrave of Bend High School.  If the name sounds familiar, it is.  His Uncle, Bill Musgrave,  is a legendary Duck Alumni.  No doubt a lot of the discussion going on this week is about how the Beavers landed the nephew of a Duck Legacy.  That, however, is not what is important here.

I have decided to attend Oregon State University! I would like to thank God, my family, my coaches, all my teammates, and all the college coaches who recruited me. I look forward to helping Build the Dam!!! #GOBEAVS #BTD19 #BuildTheDam pic.twitter.com/okcCKIqn6T

What Smith and his staff did was turn the attention and the interest of a big-time talent with a Duck offer in hand to Corvallis.  Rated 3 Stars by 247 Sports Musgrave had five offers and was on the rise as a West Coast recruit.  The OSU message rang true with Luke.  Nothing will be easy at Oregon State as the rebuilding is going to take time.  For kids like Musgrave, the honest approach Smith is taking meant a lot in a world where college coaches are as much Carnival Huckster and salesmen as they are coaches.  That is a just a matter of fact in the modern age of College Football where Billions, not Millions, are at stake.

What is OSU getting in Musgrave?

Beyond his size, which will be a real advantage at the next level, he is smooth.  His vision and ability to read the field and play in space is above average and his routes crisp.  He is also quick enough to extend plays and gain that crucial yardage needed on 3rd down.  While reviewing his film, I was most impressed with his hands and his ability to make the yards needed.  There is nothing flashy about his footage, which is right here to view, but he consistently produces on down and distance.  That is the building block or piece of the dam that Smith is looking for.  Having a productive tight end who will score in the red zone and get the yards needed from that position is going to be a hallmark of the Beavers program and a guy like Musgrave is just what the Beavers need.

He is wide and has a frame that will comfortably accommodate another 30-40 pounds of muscle.  Luke will improve his game by becoming a more effective blocker but overall as a High School Junior he brings a lot to the table.  His pledge was a huge moment for Oregon State and a statement that the Beavers, under Smith and company, will not be a doormat for the in-state boys.  They have already landed several other recruits from the “Beaver State” this season, and that appears to be something we can expect to continue.  Coaches Riley and Andersen never seemed to make in-state recruiting a priority looking elsewhere for talent.  Coach Smith knows from working with Chris Petersen at the UW that winning the State means winning on the field.  Good on him!

We congratulate Luke Musgrave and the OSU Beavers and send our well wishes to Corvallis where the #BuildTheDam movement is well on its way!

Trench Camp Unequaled For Big Men
Is the Eastside Catholic 2018 Squad the Most Talented Ever?