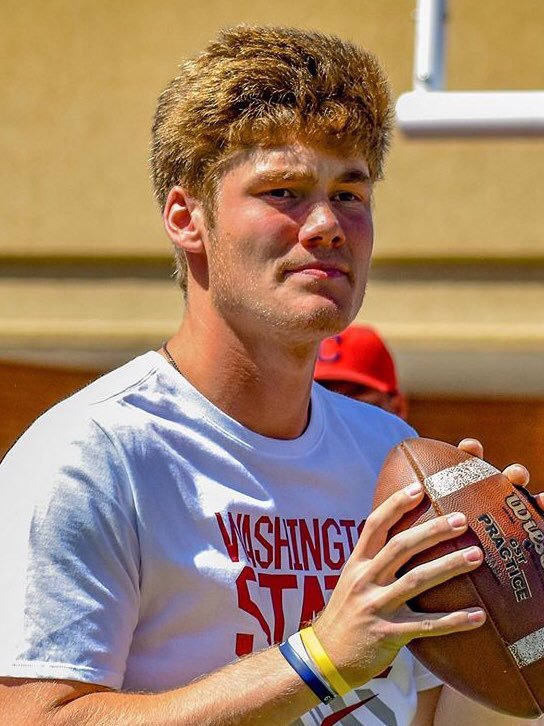 Cooper Justice is a Senior (2020) QB at Lakeridge High School and is gaining in reputation and national recruiting interest as the regular season comes to a close.  The 6’6″- 230 lb. gunslinger has an absolute howitzer of an arm and with the offer he received today from Morehead State, he has 3 solid options for football.  His film is as impressive as his size and athleticism and despite not having the State’s most prolific passing numbers he has done a great job for the Pacers.  Add to that the fact that they have the #1 RB in the State in Jalen John.  John (5’11”-190lbs) is a real burner and had offers from Oregon, OSU, UTAH, USC, BYU, Nebraska, and others before he committed to Arizona in July. John may be getting the recruiting love but to the trained eye, Justice is that old school big body QB who in a pro-set offense can stand the test of the time, use the pocket, and pick the field apart.  While he has a decent line and decent receivers his real talents as a QB will not be realized until he is surrounded by other collegiate level players.  He reminds me of Jake Luton out of Marysville Pilchuck HS in Washington who had to prove himself at two colleges before landing at OSU for his last two seasons where he is helping the Beavers and Coach Smith turn the program around.  The reason I mention this is that Luton is 6’7″ and 229 lbs and was 6’6″ and 220 lbs in High School.  Cooper Justice is in this same frame and body type and both athletes have an affinity for running the football.

“My offers include Morehead St, Georgetown, Colorado School of Mines, and Linfield. I also have a PWO from WSU and Oregon is considering a PWO. I have baseball offers from the University of San Francisco and Cal State Bakersfield as well,” said Justice.

Yes, he plays baseball and is damn good.  In a perfect world, he would head somewhere like OSU or WSU and play both sports.  He says that WSU is trying to find a way to get him onto the team and on campus but they limited options.

“I’m considering baseball opportunities for sure. Obviously, I love both sports and am looking for what will give me the best opportunity to play and pay for school. Georgetown is awesome but they only give 50% so kinda like baseball with partial offers. A full offer would be nice. I think I’m academic. I have a 3.6 which should improve this semester and I scored a1320 on SAT and a 28 on the ACT.”

Nice work for sure.  Statistically, he is no slouch either.  He has posted right at 1,400 yards passing and 13 TD’s and has run for another 290 yards and 5 more scores.  In the Red zone, he is his own jumbo back.  He just has a lot of talent.  NWPR rates his vison, arm strength, and durability among his finest assets as a QB.

Justice is also a lefty which is a weapon in and of itself as it challenges teams who are typically defending against right-handed QB’s.

Like all big fast High school kids, some schools are projecting a 6’6″ – 250 lb tight end potential from the big QB and Montana, Eastern Washington, and UC Davis are interested in him at that position.   A natural spot for a big man with talent who has an enormously high football IQ.   He says he wants to help any team that needs him and will allow him to get his school paid for.  Unlike most QB’s I have met his commitment will be to the team who needs him most at the position he is needed at the most.  That is an outstanding mind-set!

Friday the #21 ranked Pacers host the #2 Lake Oswego Lakers in an annual cross-town slugfest that is sure to feature some big moments all over the field.  Cooper will be doing his thing and the Lancers will be seeded into the OSAA playoffs the following week either way.

We think any college team looking for a blue-chip kid on and off the field who is a natural leader and an asset to the concept of “team” will want to drop in on Cooper Justice.  Have a look at his film right here!