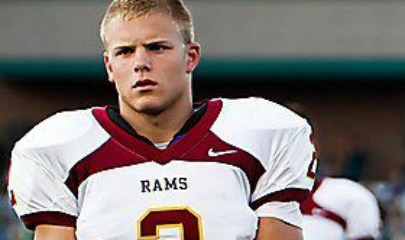 Dallin Leavitt has been ready for whatever has come at him in each season he has played football. He is in terrific shape and the 5’11”, 205 pound hitter is no joke on the field. He has innate ability to level opposing players and is mechanically explosive when he delivers a blow. Something of an enforcer if you will. He has been a star player since he was younger playing in the youth leagues for Westview High School.  And while this former Wildcat has traded in his gear for the Rams of Central Catholic the last couple of years he always left a lasting impression on people.

Dallin Leavitt has been ready for whatever has come at him in each season he has played football.  He is in terrific shape and the 5'11", 205 pound hitter is no joke on the field.  He has innate ability to level opposing players and is mechanically explosive when he delivers a blow.  Something of an enforcer if you will.

His 10th grade year he received an offer from the BYU Cougars and shortly thereafter committed.  A lot to ask from a such a young guy and really neither the offer nor the commitment were binding.  While he is still feeling great about BYU he has in fact opened the door to other suitors just to see what is out there so he can be sure.

"I did open it a bit.  There are some schools talking to me and that I think is important for me to do," said Leavitt who admits that schools like Utah and Boise State are high on his list.

While BYU is his only offer it is clear he has other interested parties.  His physique and accomplishments on the field are both part of a potent package he brings to the recruiting front.  His stature, while not prototype for a Safety, is outweighed by his skill set and power.

Dallin will play one season in college, then go on his Mission for the LDS Church for two years, and then return for 3-4 more years to his school of choice.  Something that makes kids like him a mature and effective  fit at the right school.

"That is my plan.  And I think to make the right choice I need to take all my visits to be sure what is best for me," said Leavitt.

"That was a huge honor for me and the family.  It is nice to be recognized for something so prestigious as that," said Dallin.

You bet it is!  He may or may not get the nod to play in America's premier game but he is one of a very few who were nominated in the Region.

What else has he been up to?

"Training with Bobby Welsh who is a terrific guy and he is really helping me get faster and more explosive too," said Leavitt who is enjoying the small but tough training sessions where he is working out with Sherwood High Schools Cristian Morris and Linfield University stud Josh Hill.

His main goal is to work on his speed which is in the 4.5 range or faster.  His bench is 310, his squat is at 520, and his vertical 37" inches. That folks is impressive.  This is where the explosive style of plays come from.  With that power plant driving this two way kid he has a bright future indeed.

What about football?  Is he where he wants to be skill wise?

"It is great that you asked that.  You know the answer is yes … pretty much.  But I can get better of course.  I am working on my footwork as a DB and on my football smarts.  I have been playing running back so long that it has really only been this past year I have been able to develop as a DB and so there is going to be room for me to get better this year for sure."

What is the one thing he thinks he can make the greatest strides in?

Leavitt continued, "I am too aggressive you know.  I always want to make that big hit.  But I will be looking to break down and make every play.  This season I am not missing any tackles."

As far as Leavitt and his road ahead much of that is out of his hands.  He will no doubt be getting plenty of looks and the Rams are playing an unbelievable schedule which should have eyes on him and the rest of this talented 2012 squad.

"We play Skyview (Washington), then Sheldon, Lake Oswego, and Jesuit.  That is basically 4 of the best teams in the West.  And I like our chances."

There Semi-final loss to Sheldon was a tough one as they fell just shy but the Rams held Sheldon to the fewest points anyone did all year.

"This can be our year.  And the guys are working harder then ever.  I can not imagine anyone that wants this worse then we do.  We will be looking to make a statement this year and are going to be ready," concluded Leavitt.

No matter what happens he will be ready on and off the field and it will be interesting to see who else makes their move on this high quality young man who is a solid student and alluring athlete.