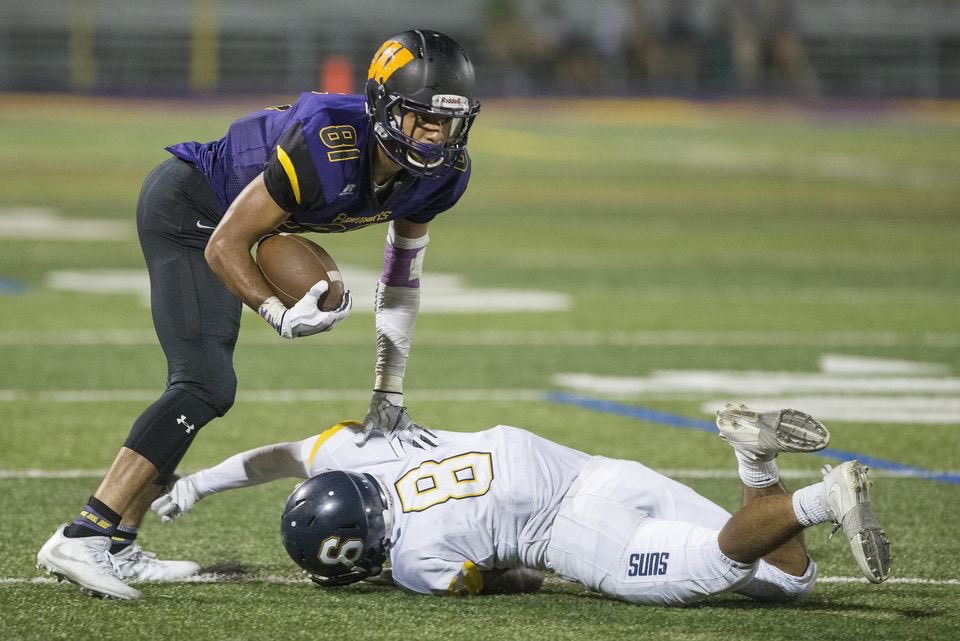 202
SHARES
ShareTweet
Get The Latest

Wenatchee High School has a storied tradition of producing some great football players and some of the very best football teams the state of Washington has ever seen. If that seems like a bold statement, then I encourage you to do some research on the Lee Bofto led Wenatchee Panthers. Under the tutelage of
Coach Bofto the Panthers were one of the best football programs ever in the state of Washington. In recent years one could easily make the bold statement that Wenatchee High School has produced the most Division 1 FCS and FBS talent of any high school football program in the Central Washington region.  They have produced four BIG TIME Division 1 football players over the past six football seasons, Cody O’ Connell (Washington State University), Isaiah Brandt Simms (Stanford University), Tre Adams (University of Washington), Cy Sirmon (University of Montana). There is another stud football player from Wenatchee who is ready for a breakout senior season and he is a player who I have followed since his sophomore season and I love what he brings to the table as a football player. Darius Carlson of Wenatchee High School in Wenatchee, WA. is a 6’ 2” 200lb Class of 2019 Wide Receiver, Strong Safety and Outside Linebacker. I was impressed with Darius when I saw his film as a sophomore and I am even more impressed with him 18 months later.

Darius has turned himself into a complete football player on both sides of the ball. We all have seen players who are bigger in stature at 15 -16 years of age, who are productive in their freshman and sophomore seasons because they have the size to compete at a varsity level but never improve their skills and techniques and therefore really never improve as a football player by the end of their high school career. Darius is not that kind of a guy.

He has worked hard to improve in all facets of the game and I am excited to share his film and bring recognition to him through this article. Off the field, he is a two-sport athlete as he also is a member of the Panthers basketball team. Darius is doing great work in the classroom as well, with a 3.00 GPA and is planning to take the SAT in early June.

I asked Darius what he considers his best attributes to the game of football and to his team, he said , “I would like to think my best attribute mentally is always staying calm and unselfish, I could go an entire game not catching a ball and understand it was the way things worked out, if that helps us win I’m fine with it. Physically, I consider myself to have really good hands. I take pride in running very crisp routes in being a very good blocker.”

I really agree with Darius about his physical attributes that he brings to the game. When I watched his highlight film (I have attached the link to his junior season highlight film below) I see a complete wide receiver who has great hands and a big catch radius as seen at the 2:40 and 3:25 mark of the film. At the :16 (second play of film) mark of the film I see a very willing blocker from the wide receiver position who demonstrates some nastiness and physicality sticking with his block. Darius does a great job creating separation (separation = the holy grail for any good receiver) by running his routes crisp, with active hands, body control while the ball is in the air and winning at the line of scrimmage as evidenced 2:07 and many times throughout the film.

One area of Carlson’s film that I came away very impressed with was the defensive side of the ball. I came away with the belief that this young man could help a college team at the higher levels perhaps as a Strong Safety or an Outside Linebacker. I believe he has the size, athleticism and the physical nature required to play defense at the collegiate level. Darius does a TEXTBOOK job at the 1:03 mark of the film dropping into his flat zone in coverage and defending the flood route to perfection, taking away the 12 yard out route by getting proper depth and then when the pass is dropped to the flat route Darius does a great job of attacking the receiver with ferocity and punishing him for a 3-yard loss. It is a great play by Darius and shows athleticism but most importantly shows coachability to learn his assignments and then execute during a REAL game. I love that.

Darius had this to say about his team’s outlook for this upcoming season. “After back to back 3-7 seasons, this class of athletes have decided something has to change, we have completely changed the culture of Wenatchee High School football.  We were in a 7 on 7 league playing against all Seattle schools, this was different for us because we hadn’t done anything like this before, we had no coaches because the coaches for the season couldn’t help us. We got 2nd in the league after losing a close game with Lake Stevens. I think we’re going to shock a lot of people this year and I can’t wait to get the season started!”

On the recruiting side of things, Darius said he has had interest from Washington State University, University of Idaho, Eastern Washington University, Portland State University, and Oregon State University. I think as this summer unfolds and he has the type of senior season I expect him to have he will be in a great position to play college football at one of the higher levels. Like I said early in the article, Carlson is a player I began watching as a sophomore and I love to see a player who improves at this great game and I think this season we are going to witness a very dominating football player all over the field.

We want to wish Darius all the best as he goes into his spring practice session and gets ready for the camp circuit this summer. Most importantly though we
wish Darius a great senior season.  Here is a link to the junior season hudl highlight film for Darius Carlson: http://www.hudl.com/v/27v2mV

Editors Note:  Darius Carlson is 6’2″ and 200 lbs and has a frame that he will grow into.  A great looking athlete from a great football town.