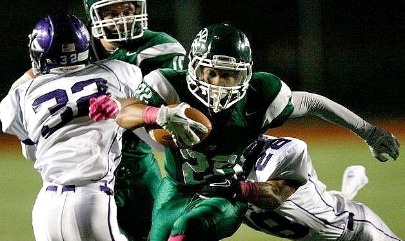 Desmond Young Lands Offer #1 and #2 May Be Close

Edmonds-Woodway Running Back Desmond Young was all primed up to have a huge break out Senior season at the Running Back and DB spot. But the best laid plans often go astray. Life happens.

Desmond Young Lands Offer #1 and #2 May Be Close

Desmond Young is as talented as they come and despite an injury that cost him most of his Senior Year he is landing offers.

Edmonds-Woodway Running Back Desmond Young was all primed up to have a huge break out Senior season at the Running Back and DB spot.  But the best laid plans often go astray.  Life happens.

And on the football field that often arrives in the form of an injury.  For Young, the 5’10”- 175 pound speedster, it was a hamstring.  And he hurt it bad enough that he was juts not able to compete in more then a few games in 2012.

Having said that he had shown that he has some serious talent and the film he produced plus a nice showing in his Junior year had schools looking and wondering what he might bring to their program.

Then he got the call that all kids hope for.  Maybe not his dream school but a good option materialized in the form of Western Illinois; Home of the Fighting Leathernecks.

“The new coach called me and wanted to let me know they were offering me a scholarship as a Running Back.  So I feel great knowing what happened this year and that my chances were hurt by the injury,” said an upbeat Young.

Now he is also hearing from Nevada who has come in on him just the last few days.

“The coaches set up a meeting with me and they said to make sure my family is with me when we meet,” he added.  ” I am not sure what they have in mind but that would be a great program to play for.”

You can see Desmond work right here in the game film he was able to produce from this  Senior Season.  It sure shows his potential and how quick he is.

Congrats to him and he joins the ranks of the kids from Washington getting their tickets punched to head to the next level!