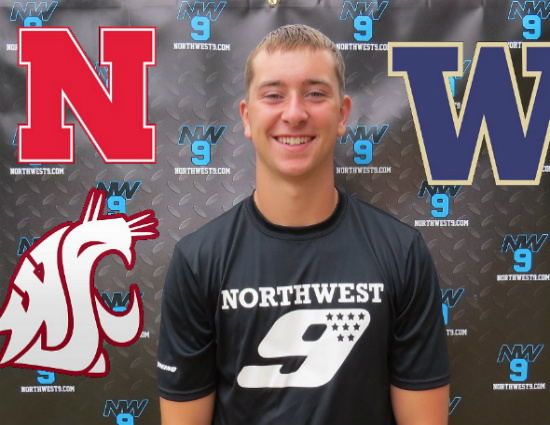 On August 25th, 2016 you will be able to see Dylan Morris of Graham-Kapowsin High School (2019) doing his thing from the NW 9 QB Camp.  He eventually walked away as the #1 guy from the NW 9 Camp and was a consensus selection from the panel of top tier analysts.  He was not #1 the entire camp getting some serious pressure from Kaden Jenks of Royal HS (WA) and Drew Korf of Capital HS (Idaho).

Coming into Camp Dylan was the only 4 Star rated QB (Scout.com 4 Star) and one of the only 2019 QB’s in the Nation to hold 4 Stars.  He was also the only 4 Star QB with no offers but the kid has not started his Sophomore year.  He is rated 4 Stars because guys like Brandon Huffman have seen his release and his skill set and they know he is as good as they have seen in a long time.

“Dirk this Dylan Morris kid is the real deal.  He could be the next Aaron Rodgers,” said Chris Miller this past Spring after seeing him at the FBU Camp (Former Oregon Duck, NFL QB, and Head Coach at West Linn HS).

Taylor Barton , widely considered the most experienced QB Coach in the NW, has heaped just as much if not more praise on Morris saying he has NFL potential and a skill set he has rarely seen.   Others in the know have chimed in.

For me The NW 9 was my chance to work with Morris 1 on 1.  The young man is all that he is advertised and boy does he release the ball quickly.  The only reason he did not have offers coming into camp was that he is so young and is still getting his name out.

Tonight we have news that he has landed not 1, not 2, but 3 offers.  Apparently Nebraska, WSU, and the UW have all offered the young gun.  At this juncture I think it is safe to say Morris is going to have 25 to 50 offers by the time he ends his High School career.  This is a very very talented young man and those offers are very legit and only support what the NW 9 staff saw in him.  We are glad and vindicated that our Vote of confidence for him at The NW 9 was proven right!

Watch our Behind the Helmet Interview with Dylan Morris from the NW 9 Camp sponsored by Boeing and Root Sports NW.

Join Us All Year Rigth Here