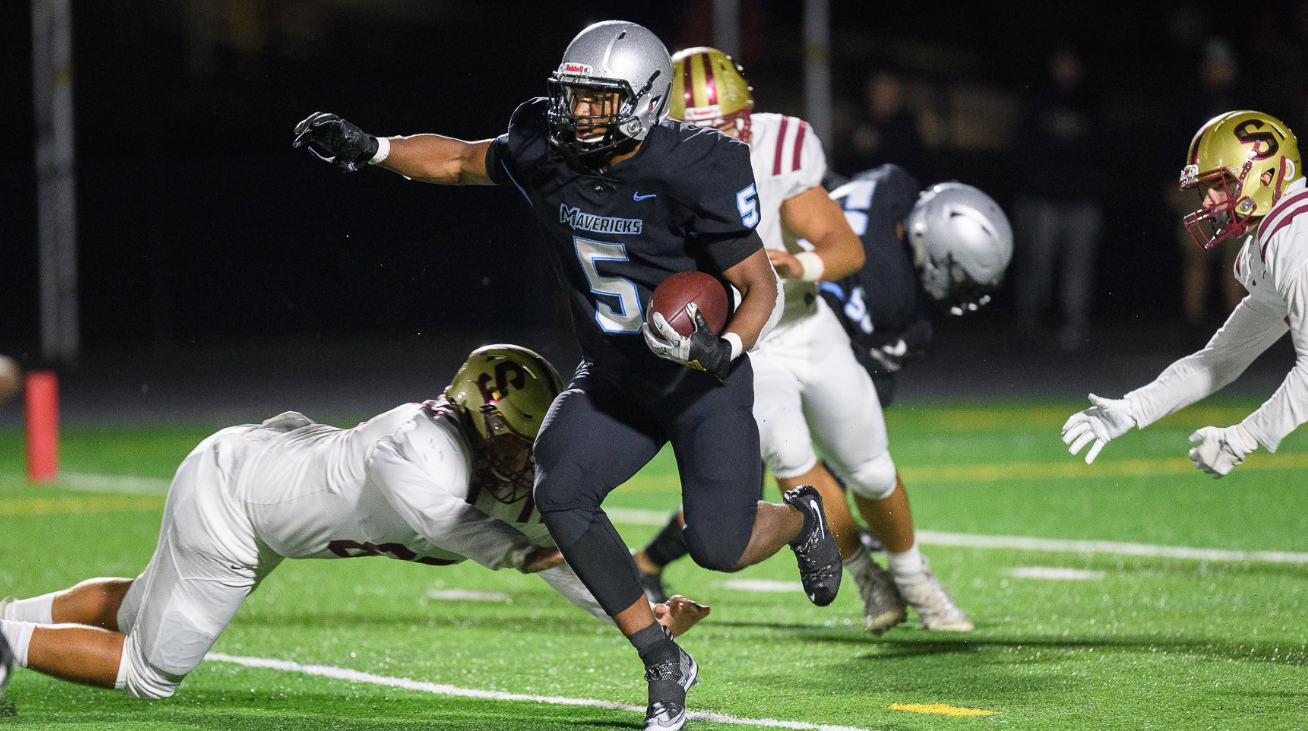 Tonight at Beaverton High School two of the very best coaches in the region will step out into this fantastic Fall night and battle it out with two great teams.

Mountainside is a new school that people often comment is so big and beautiful that it could be a college.  The brick palace on the hill overlooking the Scholls valley is a spectacular state of the art school designed to handle 3,000 plus kids in one of Portland’s biggest new suburbs.  In their 2nd year the Mavericks have jumped out of nowhere to a #2 ranking.  Coach John Mannion is one of the most relaxed and yet intense Coaches on the West Coast.  I have the highest respect for Coach Mannion just because he comes from a big system in California and all this recruiting and 7 on 7 hype has little effect on him.  He has boys who play the game at a high level and we got to know each other when his oldest boy Sean Mannion was breaking onto the scene at Silverton High School on his way to OSU where he became one of the best to ever wear the Orange and Black.  Coach was relaxed about his son and his future and simply knew he could install a system and win at a place like Silverton.  And he did. Now in his second year at Mountainview, he has his prostyle offense installed and rolling as well as a tough-nosed defense that is afraid of no one. Beaverton’s Head Coach is Bob Boyer.  He is now one of the Deans of Oregon High School football and very few coaches have won more games. My respect for him is beyond the norm.  Every year I have watched while his school has been raided and robbed of talent through boundary changes and the opening of Southridge and now Mountainside in his former school boundary.  But Boyer wins – he reinvents his offenses and defenses every year based on the talent the Beavers bring to the field.  Year after year I have watched Coach take less and make more of it.  I do not mean the kids at Beaverton are not talented because they have as much or more talent as anyone.  But the depth and sheer numbers are not as robust as other schools.  The key is the Beavers play for each other and to win and they are fearless.

Tonight there will be talent all over the field.  One young man I will be watching among a group of several is Mountainview’s EJ Broussard.  The 5’11”- 210 lb RB/LB is starting to make a name for himself.  Last week EJ had 194 yards and 5 TD’s to lead the Mavericks over the Southridge Skyhawks.  In this film we see him act as a battering ram against the Defensive line and secondary just like we expect a power back to do.  But on his 5th TD we see his terrific burst speed and balance.  As big as EJ is he is learning that he has the ability to turn it up a notch and pull away from defenders once he gets into the secondary.

EJ’s film, size, and talent have him in a position as a Junior to move up the recruiting ranks and that I expect will happen fast. He has no offers but is getting letters. He is more worried about his offensive line and teammates gaining recognition than gaining any for himself.  On the phone call we had this week he was humble and expressed humility.  He loves his coaches and his team.  At 4-1 they have now moved onto the Top 10 ranking here in Oregon.

“Coach Mannion is an incredible Coach,” said EJ. ” We have great coaches and are very lucky.  He is helping us all to become better and things are really going well.”

EJ has the size, power, and speed to be potentially great. He is no doubt that ground and pound power back any team needs to gain the yards and control the pace of the game.  But there are flashed on brilliance in his bigger runs that show the next gear speed that he has which separates him for me.

Running backs are not what Oregon is known for.  But once and a while we put out a great one.  A few years ago Thomas Tyner out of Aloha was ranked #1 in the Nation and he went on to the Ducks and had a nice career but was injured and did not make it to the NFL as many expected.  Ryan Nall out of Central Catholic made it to OSU and on to the Bears.  And Standford is enjoying the services of starting star RB Cameron Scarlett, also out of Central Catholic.

Broussard has quite a back story through his family in which incredible odds have been overcome just for them to be making it in the world.  EJ’s demeanor, focus on school, and his vision of life after football make him special.  His film flashed a brilliant talent to me and his persona only added to that.  He has just started to get into the weight room and will be running track and working on his speed.  Right now he is 110% focused on his team and making a serious play off run.

I like the Mountainside Mavericks and what they are doing and EJ Broussard seems to be indicative of the type of kids that Mannion is mentoring.  It all adds up to very good things!

Coaches if you are looking for a prototype running back who can play at the next level this young man is one to know about. On and off the field he is a winner.  Best of luck to Beaverton and Mountainside as the two top teams battle it out here tonight in Oregon.