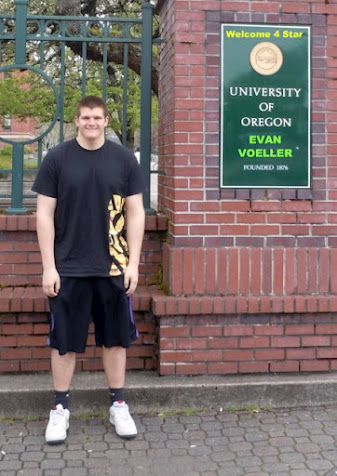 Evan Voeller Pulls The Proverbial Trigger And Shoots For Eugene

Tonight is a big night in Duck Nation and in the household of the Voeller Family of West Linn, Oregon. Their son, Evan Voeller, just committed to the Ducks.

The move comes after Evan made the rounds and had a chance to see all of his 5 finalists. The

Evan Voeller Pulls The Proverbial Trigger And Shoots For Eugene

Tonight is a big night in Duck Nation and in the household of the Voeller Family of West Linn, Oregon. Their son, Evan Voeller, just committed to the Ducks.

The move comes after Evan made the rounds and had a chance to see all of his 5 finalists. The 6'5"-285 pound 4 Star 2013 Prospect was nominated last week as a finalist for the Army All American game and that came on the heels of his 12th major offer from Nebraska.

But it was family and a realization that there is no where else he would rather be that has him pulling the trigger way ahead of a schedule he outlined for us last week.

"I just got back from the Washington Spring Game and that was good. But I just realized that I did not need any more time. I am going to stay in State," said Voeller. "I am going to be a Duck."

We asked Evan to rate the reasons he chose Oregon over Stanford, Cal, UCLA, and Washington; his final Top 5.

"First off it is my in State school and my family is going to be close. My brother is there and we will have at least one year together there. Next is Coach Steve Greatwood. You will not find a better O'Line Coach and I can learn so much from him," said the calm and cool Lion.

He concluded, "The last thing is they have something special going on. They have incredible facilities and they are winning. Those factors are big too."

Now we have known Evan since 5th grade and have worked with him as Coaches before we got into the writing gig. And he is one of the best kids and best athletes you could hope to find.

Prior to letting him go with huge props we had to ask what if any part the Duck's NCAA woes played in his decision. And he was clear. They did not. The reasons he is going there are not rooted in Bowl Games or bling or a #1 rating. He simply wants to wear that Green and Yellow.

"No. I am just going to try and improve everyday so I can be ready for my team this year and for the Ducks when I get to Eugene in 2013."

While he might stop at the Nike Football Training Camp at Oregon on June 10th for one last showdown he is otherwise off the market and done. Finito!

Duck Nation you got a gem in this kid. We congratulate Evan, The Voeller Family, the West Linn Lions, and the Ducks.

Great job all around.

Jaimie Bryant’s Recruitment A Reminder Of What Works
Goodbye Junior, Ray, and Dave: The End Of The Game