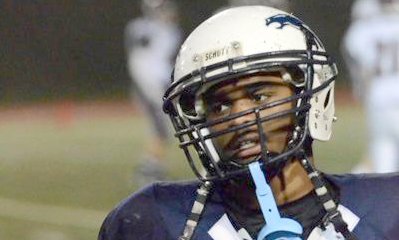 Giavani Shepard Makes A Run At The Future

Giavani Shepard Makes A Run At The Future If you try and catch Giavani Shepard of Meadowdale High School you better put on the track cleats.  Cause this young man can flat out move.  Call it speed or quickness or explosiveness or all of the above.  He has it.  And we finally caught up to him ourselves here at NWPR to see how things were progressing.

The Lynnwood, Washington student athlete powered the Maverick's ground game and their special teams too last season.  While he does not have his exact stats we have him at 1,100 yards and 13 total TD's.  Not too shabby for the 5'8" – 165 pound pure athlete who is a surprisingly powerful runner despite his reputation as a speedster.

"People talk about my speed I guess.  But I would rate my #1 skill my ability to see the hole and hit it and go.  Then my speed would come after that," said Shepard.

One review of his film will show college coaches all they need to know.  He can be a potent weapon as a tailback and should be equally tough out of the slot position.  Have a look at that film right here.

This past season went well for him but he looks at 2012 with a hungry eye.

"I learned a lot in 2011.  Us younger guys matured all season and got better.  I know for me I understand the little things about the game better now.  This year we will already know what Coach wants and what we need to do to succeed," he said.  "We are all excited to get after it again."

Now Shepard has heard from some schools but is looking to hear from even more.  He wants to be able to get out to a nice balance of football camps and a combine or two.  He will hit the Nike NFTC Camp and through this process is hoping to have the Coaches he meets have a great impression of his speed and overall ability.

While he likes offense his size and skill set could project best at the Corner Back spot.  Something he admits he can handle.

"I like defense and played a lot last year.  That might be a great fit for me and I will try that at some of the camps too," said Giavani who played a lot of reps on Defense last season too.

What about those colleges?

"Montana, Washington, and Washington State have been in contact.  And some from Oregon State too.  I would love to go down there potentially," he said.

But this guy is actually from Omaha, Nebraska.  So the Huskers would be a nice choice as well.  Knowing how hard it is this young man who is studying for the ACT and trying to find time for Track and Wrestling too in the coming year is looking forward to a good run on the Grid Iron this Fall.

"We beat Mercer Island in the Play-offs and then fell to Camas.  So that was tough but we will be back this year really strong and all the guys are already in the weight room and getting ready."

One thing is for sure.  Giavani Shepard will be in the center of the action on both sides of the ball and working hard to get his shot.