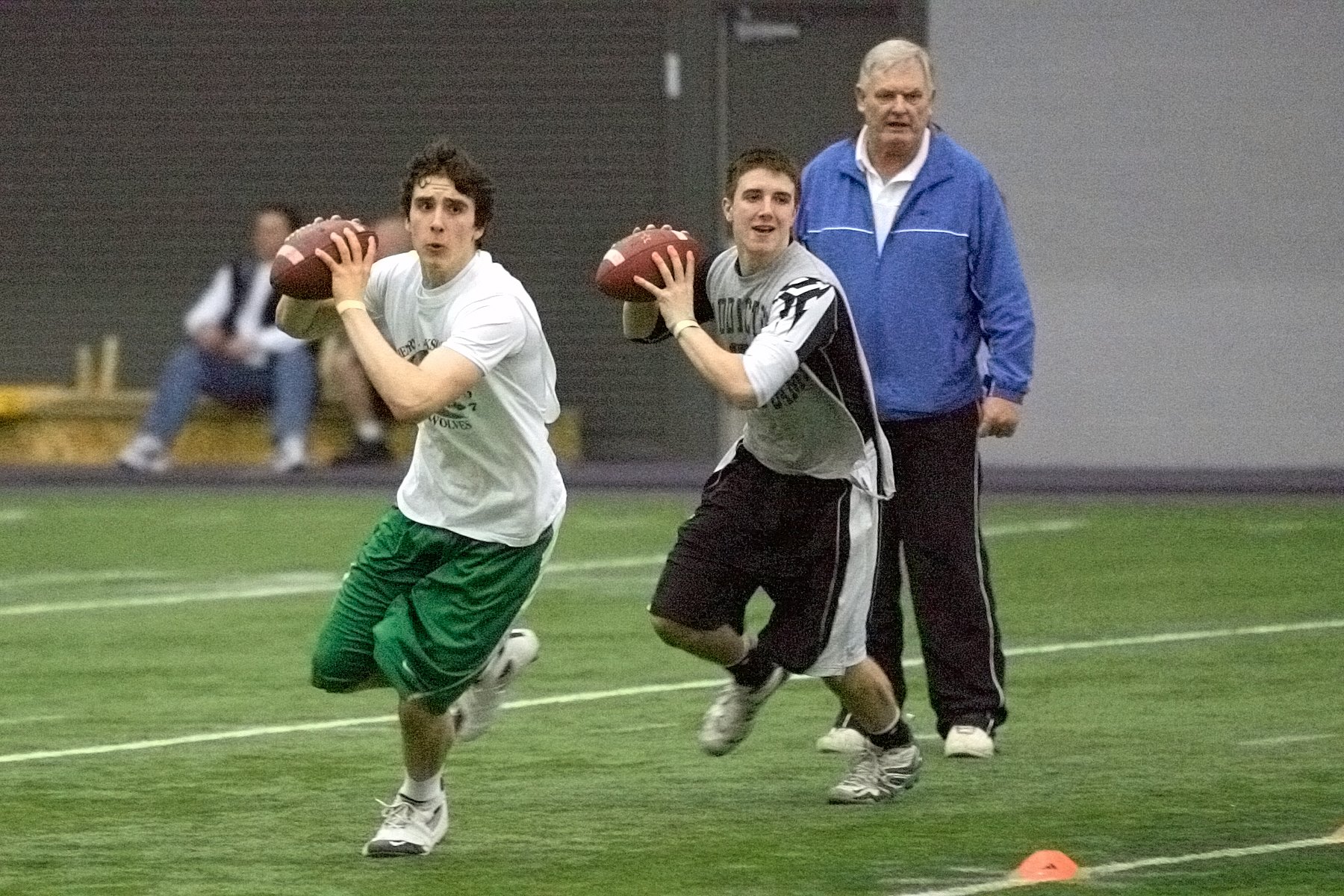 Greg Barton Shook The Earth And Is Worthy Of Honor

Greg Barton Shook The Earth And Is Worthy Of Honor

395
SHARES
ShareTweet
Get The Latest

Originally posted in 2017 to raise funds for Greg Barton who was ailing:  Updated today:  It was my great pleasure to learn from Greg Barton.  His camps and works helped me understand the recruiting game and it was at his camps I met Ndamukong Suh and his family.  At that time Oregon was a dead zone for recruiting.  Through Greg and the Suh meet up I became one of the first Prep Football national analysts and experts in the Country.  I went on to write over 7,000 feature stories (so far) and many of them were supported by Greg who always wanted to tell me about his kids.  He helped so many and along the way faced a lot of critiques.  He was an innovator and never sat still- if others copied him he would go 180 degrees in the other direction being the first in many categories.  I learned a lot, learned to respect Greg.  His mind failed him and his health has taken his life but he lives on through thousands of lives he touched.  I considered Greg a friend and I am now close to his kids.  That has been a process that while not always easy has been rewarding.

To Taylor and Jessica and the rest of the Barton family, I offer all my best and the best we can from the NWPR family!

These days of smoke and bombs and hate are troubled times- desperate times– times that are testing Men’s hearts and souls and their measure too. When we face adversity we must not look forward but rather look back.  By doing so we can see the footprints of our ancestors and see the good they did and the bad as well.  Their mistakes and Victories too will be laid out for us to learn from as long as we are diligent. One thing that can help us as we move ahead is to HONOR those that have come before us and those who laid the groundwork for the good things we now enjoy now.  Our decisions as a collective in these days will leave our mark and be the road map for future generations to follow.  The echoes I hear…. the giant shadows I see when I look back…. they are those of great men.

Because I was an athlete many of these men were my coaches and mentors.  Some are dead and some are alive – as we all age it is going to be more of the former than the latter.  If I do nothing else by looking back but remember it will be to honor them.  To give them the nod that they are/were the best of the best and the reasons we became who we are.

I am going to honor someone here who deserves it as much as anyone in my life and we did not always agree on things; let there be no doubt. If you’re talking about the roots of the development of the youth and high school football game here in Oregon and Washington, and the main cause of the recruiting explosion here, you are talking about Coach Greg Barton.

Most of you that read my ramblings or are “prep football insiders” know Taylor Barton.  His impact as a Coach, mentor, and private camp director is legendary.  The skill set he has as a man, far beyond the athlete he was, came from hard work and coaching.  It sprouted up from mentoring and discipline and from support.

Behind Taylor’s current successes are many people including his amazing wife Jessica.  Right behind her is his Mom (Heather) and his Dad (Greg).

For you old school football guys you know that Greg is the real OG.   He was the first private Coach to ever work with Quarterbacks in the Pacific NW and this dates way back into the 1980’s.  Greg often has told me over the years that he was taught by Bob Johnson, legendary Mission Viejo and NFL Coach, at his weekend clinics in California decades ago.  Seeing Johnson work with and create a litany of Southern California QB’s during that time led Greg to create a NW version of these camps.

I first became aware of Greg in the late 1990’s when my kids were born;  at the same time that Taylor and his Beaverton (OR) were breaking youth and high school records.  In the middle of all of that success and Taylor’s national records was Greg.  He flat out was coaching the kids around him to win and he did it by breaking down the game into its fundamentals and mechanics. By the 2000’s Barton Football Academy was synonymous with sccess and with the brand of NW QB’s we have come to know and appreciate; smart kids who can throw that brown leather pill.  We first worked together at a weekend camp at Portland Community College as my Son and I “Chased the Dream” of helping him become a college football dandy.

By that time Greg had surrounded himself with great positional coaches and was even offering workouts of linemen which was where we met Ndamukong Suh who got much of his early work in with Greg and his staff.   The camps were helpful and fast paced.

As I took on the role of High School Football Ambassador for the Pacific NW as the first High School Football analyst from the region he was there to help.  Greg loved to have many long lunches to pitch me stories of his top athletes from around the West.  I ate it up and covered them all and with his help and my persistence I earned a name in this sport.

Greg and I never did business together but he called when he needed me and I called him a few times a year.  He let me get a kid named Brennan Scarlett into one of his camps at the last second and that launched his (Scarlett’s) career which has now led him to the Houston Texans via Central Catholic, CAL, and Stanford.  I could go on and on about the kids we helped together and there is much more – hundreds more – that he coached up. “They will rarely if ever thank you or pay you back- not really,” said Coach Barton.  “But the work you are doing is so important.  This can never be about the money but must be about the kids.”

As he began to phase his involvement in the Barton Football Academy down a few years back he told me the space was getting too crowded and that he was going back to his roots – Coaching High School football.  Greg was right- the space for Camps and Specialists is crowded- overcrowded, and as we all know this has led to a lot of infighting and border wars this last year or so.  Most of the young guns fighting it out in the Prep Football Camp / Trainer world have their own Greg Barton stories because he coached them.

Greg and I did not always see eye to eye- me a purest not liking paid recruiters and he a coach and recruiting expert needing to feed his family.  We met in the middle most times and when I called Greg to go see a kid we both Coached, Nate Lindstrand,  who was on his last legs with Cancer he hit the door running. Greg Barton as a Head Coach at Sandy HS in Oregon worked hard to bring the program back.

No one ever wrote more flowery or longer recruiting Summaries than Greg did.  Man, he had patience and a keen eye and 6 pages of analysis of each of his kids proved that.  I have a box full of DVDs from Barton Football Camps and Resumes he sent me.  So many I should send him a bill for storing and reviewing them all!

Now having said all of this let me Honor an old Coach and mentor like Greg by telling you why I wrote this.

I did it because he means a lot to me – even if I did not admit or realize it.  As the last few years have gone by and we interacted a bit it became clear that Greg is not doing well from a health standpoint.  In fact, he has Alzheimer’s and it has become advanced enough that the old Coach needs our help.  The family has set up a Go Fund Me Page and because Taylor is too proud (just like me) he has not asked me for help and I am guessing he has not asked any of you either.  He is focused on his family and his job and the many stresses that surround all of that.  Having his Dad and mentor needing help is not something easily dealt with.

So-  Let me Honor Greg with all I have said.  Let me give huge props for what he has done, all he has done.  He was an innovator and saw a need and he filled it.  He created demand for something people did not know they needed and he made the sport and its athletes collectively better.

“Thank you Greg for all you did- many of your students are tearing up fields in the NCAA, NFL, and Coaching in the HS, College, and Pro Ranks.

Greg -What you said to me about them rarely if ever thanking me is right.  So right, in fact, I can now look across the NFL and College at dozens of players I helped who I do not hear from.  Here is to hoping that by reading this you hear from them as you battle this terrible disease and move into the final Chapters in your book of life.  Their support you deserve kind Sir!”

If You knew Greg, were helped by Greg, or appreciated him this week is a week to post your feelings on social Media and to the family!