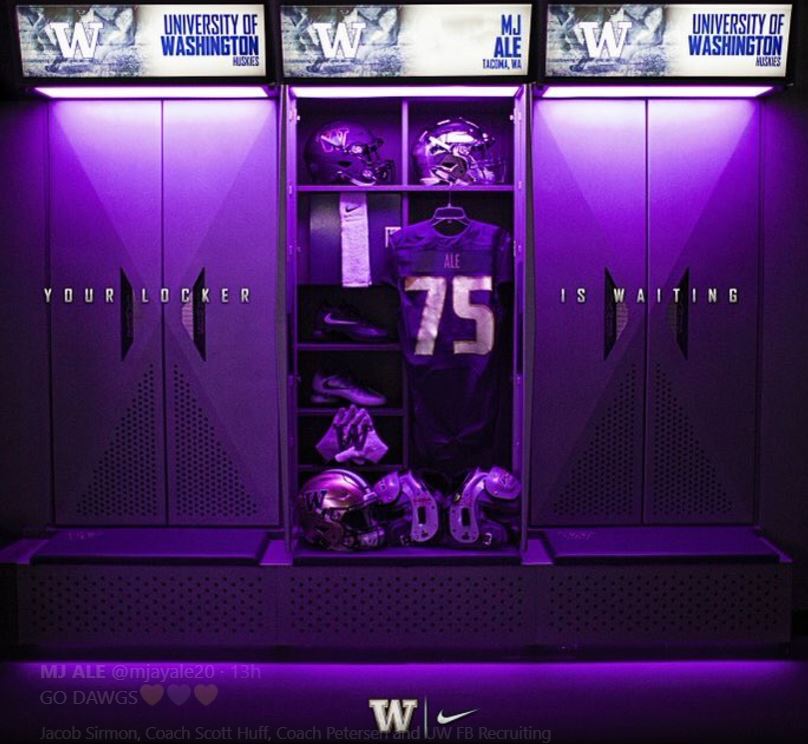 182
SHARES
ShareTweet
Get The Latest

It was 2 years ago that we first heard about MJ Ale, a massive kid from Australia who was living in Fife (WA).  The Aussie with Polynesian genes had great size at 6’5″ and 320 lbs and was only a 10th grader but showed that he could bend and move.  His Head Coach, Kent Nevin reached out to NWPR knowing he had a special talent.  Fife has not been a football powerhouse but has had some great recruits in Monike Sarte and Kaleb McGary who both moved into the D1 ranks recently. When Nevin needed help to move the needle on his newest big linemen he went to McGary who was a 4 Star National recruit we had covered heavily.  “Call Dirk” was the advice he gave his former head Coach.

“Hello Mr. Knudsen, my name is Kent Nevin and I am the head football coach at Fife HS. I talked Kaleb McGary who played for me here and is at the UW.  I told him I wanted to help one of my new players here at Fife and he said to call you! He is 6’5 320 MJ Ale, he comes to us from Australia, where he was a rugby player and boxer. He is a character kid with great feet. He got his first full ride offer from Utah this spring! I just want to do a better job helping him get his name out there. Any advice would be greatly appreciated. You can reach me on my email, Thanks
Coach Nevin”

When you coaches reach out understand we move that information to the top of the line.  We react by reviewing the film, calling the player, and doing a feature story.  Our social media footprint is 4,000 Twitter followers, 7,000 Facebook Followers, 2,000 You Tube Subscribers with 8 Million Views, and thousands of fans and friends who love High School Football.  No surprise many of them (Thousands) are Coaches.   Any player you send us is going to get our help and for FREE!  We are NOT a recruiting service and do NOT CHARGE the players or College Coaches 1 dime.  We are a Not for Profit site. Please send us your guys.

Based on Coach Nevin’s request we covered MJ Ale and his HUDL views went from 120 to about 1000 in a couple of months.  He had a great Junior season and that film wowed Coaches and MJ is now at the 6’7″ mark.  He never played football before 10th grade and he did NOT TRANSFER to a power school.  He certainly could have. His 15 major offers, 3 or 4-star ranking, and his commitment yesterday to the University of Washington are all a direct result of his talent and his character.  He is not a Camp kid, did not fly all over the place, rarely made an appearance, and he rose to a 3/4 Star Recruit that could have gone wherever he wanted.   He had help of course and it started with his high school coaches.

Nevin is a player Coach and because Fife is not a “transfer school” he works harder than many.  Maybe kids transferring should transfer to Fife where a Coach like Nevin spends time looking to help his kids- Ale is not the first athlete he has sent information to me on, just one of several.  Nevin will forever be able to take pride in knowing he helped guide this outcome for MJ and it appears to be a great one!

We expect MJ Ale to be an impact player and he is truly one of those recruits that can move a team into the future.

Teams do not need Star Rated players to win.  That will not win you ball games.  What they need is a few superbly talented leaders who raise the bar and set the standards of excellence.  All D1 offered players have the physical talent, that is a given as D1 Coaches do not make mistakes on that.  But it takes Coaches like Chris Petersen to mold that stew into a winning team. Look for Ale to be one of those guys that add the special ingredient.

To all our Coaches and Athletes play safe, Head Up, Hydrate, and Fight on!