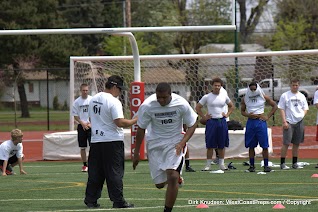 High School Football Combines have become irrelevant and are nothing more then a Money grab and a hot bed for seedy street agents for the most part. Paying someone a lot of money to tell you how good your kid is and then thinking some college coach or recruiter is going to see it is a fools game. YOUR BEING RIPPED OFF!

Editors Note:   One April 12th of 2012 I wrote this.    It stirred controversy, support, hate mail, and calls from all over the US.  In the 9 months that have followed this we have seen another doubling of events like these Paid Combines mentioned here in.   And I wish you could all know all I know.  But you’ll have to take my word for it.    The more of these  Showcase Combines and “Hype Camps” the less Colleges are paying attention.

If everyone can go and get coverage and be lauded as the next great thing then no one is special.  College Coaches have told me flat out that they do not care about combine scores and results because they do not believe them.  They do not believe that someone who charges a significant amount of money to a kid and his parents can be or will be objective in what is written or put out there on them.

We asked the last 3 schools we talked to this question:

Oregon State Answer:  No not really.  We rarely if every look or even care.  We recruit based on what we see from a kid either in person or at our camps primarily.  There is way too much bad information out there now.

Boise State Answer:  Not really.  There is too much Hype out there anymore.  We recruit very carefully and will only make an offer on kids we have seen up close and personal for the most part and Combines and Camp articles can not do that.  Never could.

Idaho Answer:   The results are hard to trust and confirm.   A legitimate source maybe we look.  But at n time will any recruiting determination be made on this information. “We could care less what a kid gets at a combine because we won’t trust those numbers.  And that only tells us a little bit anyway.  We recruit football players and athletes.  Not numbers,” said one PAC 12 Coach we spoke to this week.  “There is no reason for a parent or an athlete to get pre-occupied with a combine when the job at hand should be keeping grades up and finding ways to get to know collegiate programs first hand.  No combine in the world will do that.” All the best from me and the staffs at Oregon and  NWPR, WashingtonPreps.com and the RivalsHigh Network!

Skyler Phillips Looking For Options After Beavers Call It Off
Air One Football Camp Opens Sunday! Get Some Work In