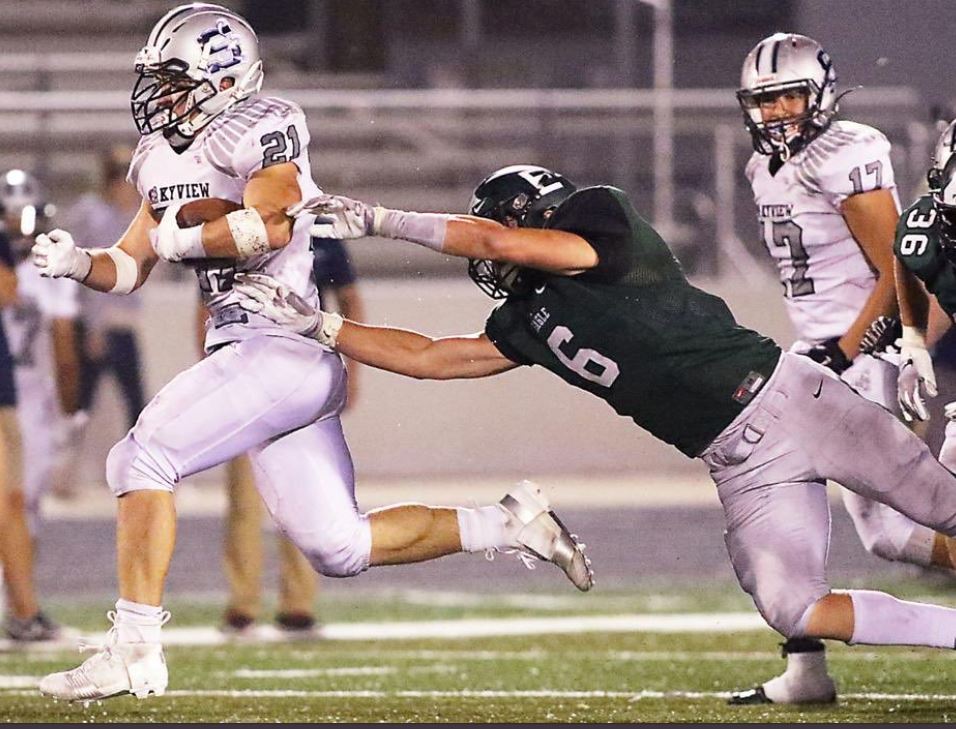 775
SHARES
ShareTweet
Get The Latest

It took until Sunday night this week for me to get back from a day on the river chasing fish to see the red flashing light going off in the NWPR lair here in Nike-Town.  It only goes off when one of the Friday Night Lights sensors I have planted around the NW detect a millennial performance of epic proportion.  I opened the steel door to NORADNW, switched on the WOPR and flipped the master control on and our data came across the screen.  In all caps was the news of a 606-yard game by a NW prospect on the rise! “Wait…. what?”, you say.

That is right – 606 yards.  It only takes 447 yards to set off that red light so I had to actually pour liquid Nitrogen on the WOPR super-computer to cool it down before it started to play a game of “Global Thermal Nuclear War” with itself leading to world destruction. Forgive the movie references but “that movie” came out in about the time I was covering football for the first time and I love it. All joking aside this kid is too much!  Tyler Crowe of Skyview High School in Nampa, Idaho went off this past Friday!   He led his team to a 70-50 win over Meridian to earn the Hawks a spot in the 5A Idaho State football playoffs.    Now by leading, I mean forcing the issue and putting a stamp on a game in a way that few if any other athlete ever has done.  Look at these numbers from the game!

If you play at the highest level of your State association and have ever put up numbers even close to this I want to cover you now!  This effort puts him in some rare air and he will go down for the ages at his school.  Please, you college coaches read this story where his coaches are quoted- it tells more than I can tell here.

So–  I had to find out more.  I contacted Tyler to get the story behind the story.  He answered a smattering of questions and I want to just post what he answered for me here:

“I play football and track. I have been a captain on the football team since my sophomore year and have started both ways ever since then. I do track to get faster and more explosive for football.  SO far I only have offers from College of Idaho and Rocky Mountain College. I have lots of Big Sky schools “talking” to me but no one has pulled the trigger yet!

This is our team’s first year in 5A and we are doing pretty good. We are 5-4 and are in the state playoffs as we speak. I am the state’s leader in total yards with 2,034 yards. I play on both sides of the ball and play on some special teams too. I run a 4.6 40 time weighing in at 220 lbs. I bench 335 pounds, squat 455 pounds,  deadlift 505 pounds, and I power clean 275.  I play with great speed on both sides. I can see myself playing nickel in college because I am fast enough to play in space and I’m big and physical enough to help against the run.”

UPDATE: He messaged me to talk about his O-line and we all know without them he has no shot at a game like this.  Here is what this goal-oriented kid had to say!

“Our O-line has stepped up the challenge of moving up divisions this year. I truly believe I run behind the most physical line in the state.”

Now think about this.  6’0″, 220 lbs, and he has core strength at the very top tier of high school and speed to run defenders over.  His running style is violent and he generates incredible power that, when added to his burst, translates to force.  This kid is for real.

He is at the very least a Big Sky full ride athlete.  I would love to see EWU, PSU, Idaho State, or Weber State get after him.  There is a playoff run going down for he and his team so it is game by game.  I would get someone over to watch him next week if you at all can.

Tyler is also a 3.8 GPA and has 25 college credits.  He can graduate early and can be with his future team in the Spring of 2019.  And just to clarify, because so many great football players from Idaho are LDS and go on a mission, he is not and will not be.  This can sometimes cause pause for colleges offering kids from this great region.

Coaches we had him make a quick 10 play highlight from last week so watch this.  You will know what to do!

You collegiate coaches should know after all these years that 1) I am unpaid, 2) I play no favorites 3) I have a tremendous track record of picking sleepers and next level stars, and 4)  I am not here to waste your time.  We call them as we see them and unless this young man has a team of 8th graders defending him and is using CGI to produce his HUDL film it would benefit you to get a closer look.

He seems to have a love for Weber State and I think that is because they are paying attention to him.  No doubt the terrific staff at Weber is on their A-Game!  Coach Swan and Coach Duff I see you out there in Ogden!  Many props.

Tyler reminds me a lot of Sam McPherson who is blowing is up at EWU – similar build and speed.  The two of them are very similar runners and have an on-switch that goes from 0-110 in about 3 seconds.  This is a really good football player everyone and we never do enough for these Idaho kids.

I am still looking for a couple of guys to assist us in Idaho who know the football scene so please email me or message me on Twitter of you want to help the boys over there!  Best of luck to all our guys and Tyler…keep tearing it up!  As we discussed Friday Night is like nothing else and football ends for everyone someday!  Keep having fun and maybe we will see another big bight or two from you and the Hawks yet!