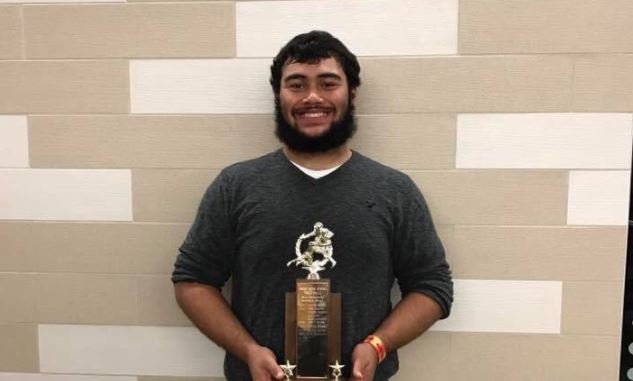 132
SHARES
ShareTweet
Get The Latest

You know the name.  Polamalu – it rolls off the tongue and is football Royalty!  If you do not know the name you need to dig out from under that rock you have been living under the past 20 years.  Troy Polamalu played football in Winston, Oregon for Douglas High School and was barely recruited but USC was paying attention.   The great one went on to 3 consensus All American awards while at USC.  Pittsburgh took Troy in the 1st round of the 2003 NFL Draft.  12 seasons later he had two super bowl rings and had played in the Pro Bowl many times.  He ended that career (158 Games) with 770 Tackles, 32 Interceptions, and the love of all fans he played for.  He was a legend in the game. Troy Polamalu is related to this young star who has a very similar storyline so far. Read on to find out more!

He was not the only one in the family who has played America’s game.

Polamalu’s uncle Kennedy Polamalu was the Jacksonville Jaguars running backs coach for five years, during which time the Jaguars defeated Polamalu’s Steelers in four of their five meetings, and was the offensive coordinator for UCLA. Another uncle, Aoatoa Polamalu, played nose tackle at Penn State from 1984 to 1988.[25] His cousin Joe Polamalu played linebacker for Oregon State University and another cousin, Maika Polamalu, played fullback for the United States Naval Academy. Another cousin, Leie Sualua, played at University of Oregon and Nicky Sualua at Ohio State then to the Dallas Cowboys and Cincinnati Bengals.

People that know the story know that Troy lived with his Cousin Joe and his wife in Winston and that Joe was one of his Coaches and mentors; providing a powerful father figure.  After 15 years at Douglas High (5 as Head Coach – 40-19) Coach Joe, a former OSU Beaver, moved to Sandy to take on the task of making Sandy a winner.  He has done a wonderful job since arriving and this year they have things rolling and are 4-1.  They play the top rated Wilsonville Wildcats who feature All American and future Husky Draco Bynum among others.  Coach Joe and the Pioneers have their work cut out for them.

Now one of the guys that make this Sandy team tick is Joe’s own son.  Iosefa has made a name for himself with his talent and fierce play.  Yet like Troy, his High School career has gained little attention by the big media types.  No surprise because this young star has a job and a family is a humble-no-hype group.  Talent finds a way to shine and will never be denied when given a chance to shine.

One review of his Junior film tells the story.  We talk about talented under the radar guys being a hidden gem or a sleeper recruit.  I am going to call Iosefa a hidden sledgehammer.  That is simply because he is a force to be dealt with on every play.

Iosefa is 6’0″ and 230 lbs and a middle linebacker for the squad.  We chatted a bit because I wanted to know more about him.

NWPR:  Iosefa how big are you?

NWPR:   You are very talented- are you gaining any offers or attention?

IP:  Not too much yet.  Working on that.

NWPR:  How is the season going so far?

IP: Season has been going well, had a rough start against Silverton. However, have been making up for it since. The team is just starting to click and play as a team.

NWPR:  Tell me about your relationship to Troy?

IP:  Troy is my biological cousin. But, we refer to him as Uncle in my family.

NWPR:  Awesome!  What else do you do in sports?

IP:  Besides football I’m really a huge fan of wrestling. I wrestled HWT last season and ended up losing 3-2 in the state finals. 6) I have no clue tbh haha school and sports have always been my

NWPR:  Wow wrestling and football are so complimentary!  Now look a little birdie told me you work?  How in the heck are you working, doing sports, and going to school?  It’s pretty unreal.

IP:   I have no clue to be honest.  School and sports have always been my lifestyle since I was young. Work is just a little heavier load I am fine with doing, keeps me always busy which I like!

NWPR:  So tell me about school?  How are you doing in the classroom?

IP:  I have 3.9 GPA with mostly college courses.

NWPR:  Oh my goodness- well of course you do!   Iosefa your team is a 5A team.  You played Madison who is rated 6A team.  You know there were several D1 recruits with offers on that squad playing against you and your team beat them! Do you feel you have what it takes to play at the highest levels? Can you hang with the best? I feel you can – I am sure you do too- so what goes through your mind on these matters?

IP:  Heading into teams like Madison I love it. It really does challenge you, but I’ll always play as hard as I can whether it’s a D1 recruit or a first-year player I go against. And yes I believe I can play with guys like the best!

NWPR:  So Troy was not a super hot recruit out of HS- a little known 3 Star who got to USC because of a family connection. He made it on grit, hard work, and toughness. Does his story tie into your own? I mean he is a terrific player- Hall of Fame- but like you, not many people knew him or about him but his appearance at USC brought them back to the top of college football and he was credited for setting the bar there and making that happen.

IP:  Troy showed a lot of my family what hard work could do for you and that’s one of the many reasons we love him so much. And I would say my story is similar, but I feel growing up in the family that’s just how we’re raised to be tough, to work hard, and to have a chip on your shoulder.

NWPR:  You can play – that is clear to anyone that watches your film.  So where are you looking to play?

IP:  I mean standing right now without any serious offers, I just want to play at the next level anywhere. Just to be able to put on pads for another season would be amazing. Education is huge though to my family and so I do like looking at schools with great engineering and architecture programs (the field I’d like to go into).

NWPR:  Iosefa your an impressive young man and we are big fans of your talents.  You will certainly have a great future-football and beyond!

IP:  Thank you so much Dirk- I will stay in touch.

Iosefa and I went on to talk about his faith, that being LDS.  Many great LDS players are left off of recruiting by many colleges because they go on Mission- when called.  But they have choices and coaches need to know this guy is calling his own shots.

He has the name.  He has the talent.  He certainly HAS THE GRADES!  Man Harvard needs to sweep in on this guy.  Anyone would be wise to do that.  Desire and effort cannot be underestimated but too many teams are starstruck- look at what he is doing as a kid!  Imagine him as an adult and contributing on and off the field.  It will be amazing!

Best wishes to Iosefa Polamalu and the Sandy Pioneers all season long!

Catch all of his films right here-