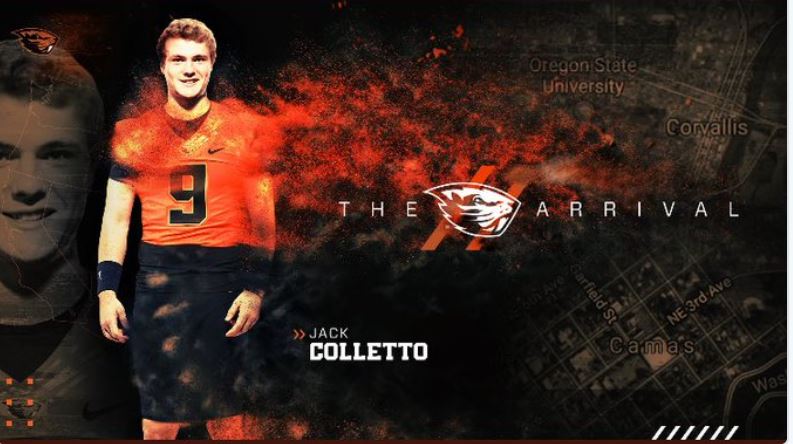 166
SHARES
ShareTweet
Get The Latest

It was about 18 months ago that my good friend John Charles of Air One Football Academy called me to tell me he had a great QB prospect.  John calls me only when he has a legit talent.  He has proven to be right time after time as the athletes he has trained are usually raw kids looking to become the best, and John is the guy able to make them great. When he told me he had Jack Colletto of Camas High training with him I told him that Jack was known as a gifted linebacker.  Charles had that fact down but Jack, he promised me, was going to be a D1 QB.  I was all ears.  We agreed to see where things went as the season got going.

Jack had never played QB but his Senior year he stepped into the starters role at Camas and the rest is history.  The 6’3″- 220 lb “athlete” took the Papermakers to the Tacoma dome and won it all in the Washington 4 (A) big school division.  Add to that his Gatorade Player of the Year award and one could say that this was the most successful single season any QB had ever had.

BUT… Colleges had already offered all the known names as Juniors and Jack was left with not much interest as signing day 2017 came.  He received a late offer from Idaho State which could have been home run.  But Colletto decided to give Junior College a shot and headed to powerhouse Arizona Western where he split time at QB last year throwing just under 600 yards and 4 TD’s.

The JC film along with the D1 skill set that Charles had predicted shows up big time.  His size, his winning ways, and his football IQ all added up to make Jack a real option.  Schools made offers and among them were Vanderbilt and Oregon State.  Today after looking at all of his options he chose Oregon State.

His road has been unusual.  A State Title, a season at a top JUCO, and now he is a Pac 12 QB with a shot at early playing time.  This folks is the definition of talent.  No hype, no years of pursuing the dream, just a plan perfectly executed.  I would say that his road is unique but not unheard of.  He reminds me of Justin Herbert, another guy who was not really a top QB until his Senior year.

Dudes play people.  Real talent will not be denied.

I think this young man is hitting the OSU program at the perfect time.  This could be the start of a 3-year comeback!

John…my friend… you were right!  Keep those calls coming in!

Jack may have followed the “1 and Done” JC formula which is used by academic qualifiers to get options and it worked for him.  As we approach Superbowl Sunday a few more top athletes from the Pac NW are making some moves.

Ahmir McGee – West Linn (Or) RB- DB – This young gun transferred to West Linn last season and had a nice Senior year.  He had some options after the season and has made a decision to attend Stetson University.  in Deland, Florida.  They are a D1 program in the Pioneer League.  This is a kid who can do it all!  Way to go Ahmir!

Stuart Kalvin – Eagle HS (ID) SS – OLB  Weber state is getting a great one in Stuart who is as big and as physical of a defensive back as you will ever see.  This should be a great fit and Weber State has sure been on a run the past few seasons.

COMMITTED‼️Very excited to announce that I will be continuing my football career and furthering my education at Weber State University! #Gowildcats pic.twitter.com/GK2EfzCWRe

Mekhi Metcalf – Garfield (WA) WR-Athlete .   Again here is a young man who is just a true talent.  The family has athletic legends all through it and Montana State is a perfect place for him to shine!  Congrats Mekhi!

Semontae Andrews – Rogers HS (WA) DT- T  Look folks, this is a 6’4″- 285 lb beast who is capable of playing big!  He is heading Arizona to play JUCO ball and he should earn his way up to the bigs from there.  We really like his upside!  Way to go Semontae.

This is a little bit of a new run-up to signing day this season- with so many guys signed early it has been great to see other players get their time to gain some attention.  We continue to report on athletes and look for any of you wanting coverage to reach out to us on Twitter at @NWPrepReport