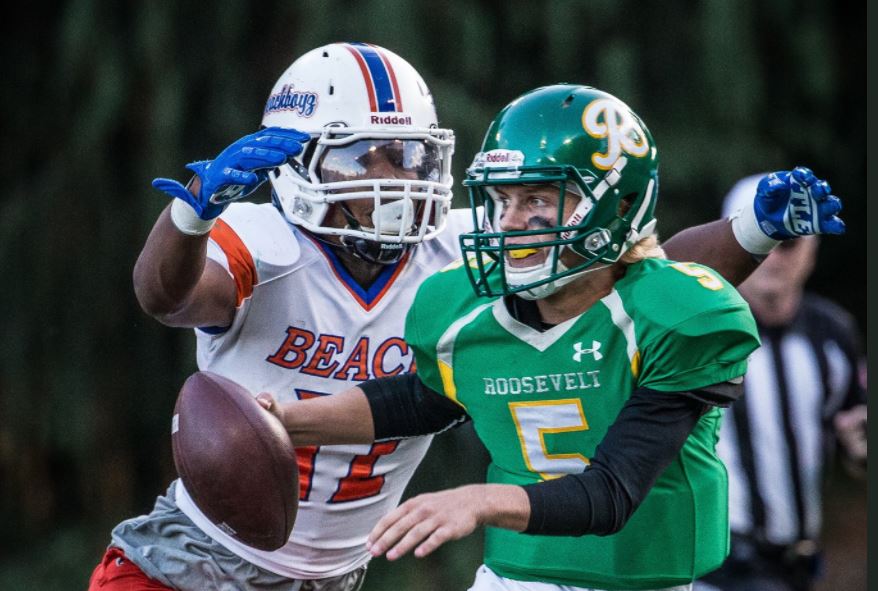 The big man from Ranier Beach in Washington, Jarrell Anderson,  was a hot prospect this past year and he showed everyone why as he helped his team go to the State Championship. Showcasing a wide variety of skills at Tight End, OLB, and DE the young man from Seattle really gave a solid accounting of his many talents.

Today he landed his 8th offer, this one from Sacramento State.  He has Hawaii, Utah State, and Nevada as well and several other Big Sky schools.  He has a solid 3 Star ranking and I can not help wondering what it would take for him to land a 4th Star.  For me, Jarrell is a bit of an enigma.  At 6’4″ and 240 lbs he has a big physical frame.  Upon further review and with a closer look Coaches will not a massive lower body.  Long arms and a big upper body indicate that he is going to easily be able to move up to 260 to 280 lbs and still have the speed to maneuver with the best of them.

If a school is recruiting him as a Tight End they have a great prospect- he will be effective with his excellent hands and upfield blocking.

Having said that I believe we are 24 months away from seeing his best football.  His upper body is just starting to develop and it is my assertion that as he enters a collegiate program he will fill out and wind up being a major star along the defensive line.  I might be wrong but seeing his film below will easily convince you that his defensive skill set is right on par with the best prospects out there.

I think of Oregon State and their new staff and have to wonder if Jarrell is not the sort of blue-chip recruit they could get a terrific value from.  As they rebuild they will look to bring in some immediate impact guys as well as players with superbly high upside.  Let me suggest that Jarrell Anderson is that sort of young man.  In two years I hope to be saying “I told you”.  Check out his film and we congratulate Jarrell on the offers and the terrific season he and the BeachBoyz had in 2017!