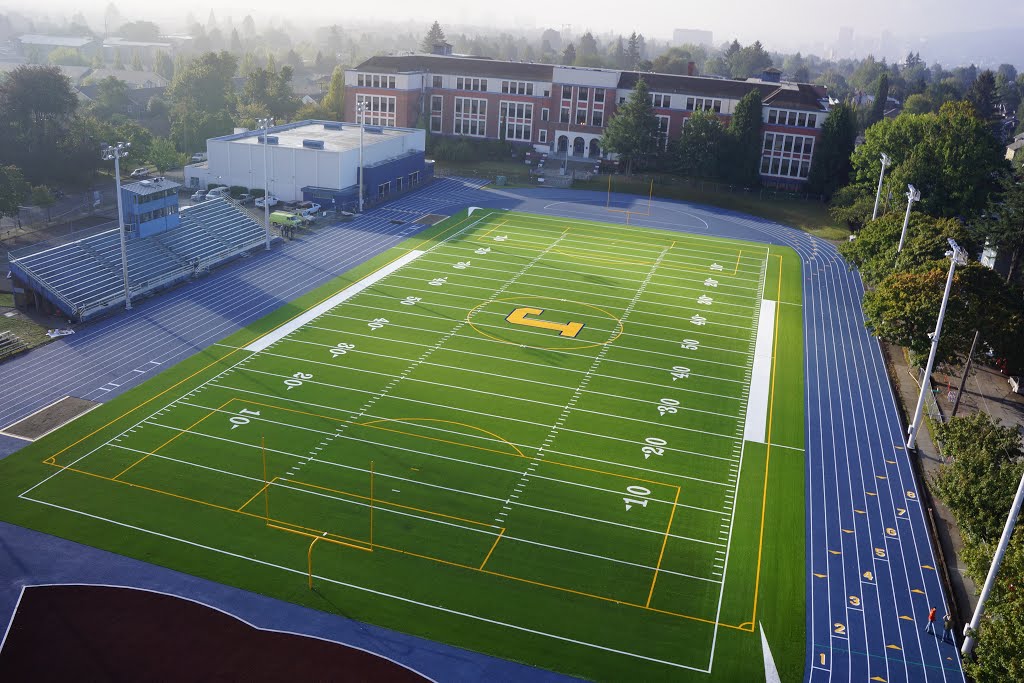 417
SHARES
ShareTweet
Get The Latest

The Jefferson Democrats over in NE Portland are a known basketball powerhouse.  With superstars like Terrence Jones, Terrence Ross, Silas Melson, Aaron Miles, and Brandon Brooks the well-worn halls over on 5210 N Kerby hold the memories of  Oregon HS Hoops and NBA Legends. An aerial photo from years ago shows Jefferson High with Turf field that was known for getting pretty sloppy on a Friday Night!

In those earlier days the school and the Portland Interscholastic League (PIL) were big and the premier high school League in the State.  Winning Championship takes talent and numbers.  The more kids the better.

In recent years Jefferson has seen enrollment sink and this year the school reports just over 530 students.  It is just big enough to be a 4 A school in Oregon out of our 6 levels.  Having said that the PIL chose to “play up” with the bigs so that the basketball programs could compete at the highest level.  This has left football in tough straights as the PIL Schools have to man up a roster big enough to compete safely with the giants.  Most 6A Oregon schools have 1,500 kids at the very least and some are pushing enrollments of 2,750 kids.

Most 6A Oregon schools have 1,500 kids at the very least and some are pushing enrollments of 2,750 kids.

The Democrats have had a rough go of it the last few years and 4 years ago it looked like Football was done for with just 23 kids turning out.  They survived that season and after a decade of loosing the once proud program took a big step last season.

Behind first-year Coach Anthony Jordan (Jefferson ’91 / PSU) the team managed to get to a 6 win season, make the playoffs, and give mega-school Westview a serious scare in the playoffs loosing on the road 50-38.  That was a huge step.

“The kids battled last season.  We came together and worked our butts off,” said Jordan.

This man and his staff have been giving back and constantly working to get the team to this point and that included going out and getting $45,000 in sponsorship money to give Jefferson a weight room that has allowed them to compete.  The weights prior to that were clearly way behind the times.

As this pre-season started the tiny school was stepping back into the fray and it looked like the PIL Championship was well within reach.  Then came several big-time transfers as three or 4 of the best players on the Demo’s squad transferred away including Damarzhe Nelson and Sage Leigh who wound up at Madison HS and Elijah Elliot,  a potential future D1 ATH, went over to Central Catholic. Jefferson was lucky to get a new field a few years back, just like the big schools! Now this small Portland High School is playing the role of Giant Killer! Image Source- https://ssl.panoramio.com/photo/112438956

Coach Jordan and his crew dug in and let the starters with star power move on even as they tried to keep them from going.  Coaches own Son, Caleb Jordan, is perhaps the best QB in the Pacific NW and clearly the best in the State of Oregon for the 2020 Class.  He has D1 offers and is the first QB in State to break the 1,000 yard club and he did it in three games.  The boys had to dig in and stars had to step up this year so far.  And they have.  Many talented young men have stepped up to leadership positions on the team and boy are there some rising stars and a great team unity happening over there.

This little school, who really has no business competing in the 6A on paper, is doing it and is now 3-0 with wins against three big schools.

On top of overcoming the loss of high-profile transfers, the Demo’s had some unwelcome news this past week that threw them off their perfect 3-0 record.  A complaint came from within the PIL League that the team had played an ineligible player in the game against Franklin!  Jefferson was stripped of their win and fined $100.00.

Despite clearing a JV player to play on the Varsity with the Athletic Director it was determined that one Frosh/Soph player did play 6 plays on the varsity last week after playing 4 quarters in the earlier game.  This is a violation of rules (no player may play more than 4 quarters in a week) and while unintentional, and certainly not a deciding factor in the week 3 win, the Democrats were forced to Forfeit.

This may potentially upset playoff and League standings despite the lopsided score.

Now let me interject here.  Westview has 70 plus players on their Varsity Roster,  Redmond has 70,  and Franklin at least that many.  Jefferson has 43.  Jefferson has no JV Team; just what is known as a Frosh/Soph Team.

Incredibly there are 83 total football players at Jefferson out of a student population in the low 500’s which means 1 out of every 7 students in the school play football.  That is perhaps 3 times higher than any school they compete against and is just a statement about what the Democrats are all about right now.

Jefferson has a minority population of 75.5% of total student population.  It just seems to me that these issues, these punitive rules, and inquiries, are constantly being focused on our smaller schools like Jefferson and it can not help but feel like what it feels like- and it is wrong.  Truly wrong.

“We as coaches did out part.  We followed League protocols and had him cleared by our AD – he was good to go,” said Jordan in regards to the player that caused the forfeit.  “We have our work cut out for us now but are looking ahead!”

Folks someone is watching with Binoculars, a little notepad, and with an agenda to take an undersized and underprivileged school like Jefferson and subject them to this level of scrutiny.

The same school that lost more star players to “transfer-pocalypse” as I am calling it, the school who plays teams 3 to 5 times bigger than they are, and who managed their way to a 3-0 start is now stepped on over a small rule.

Go on you Demos- Go ahead.  Some of us are watching and see whats up!  This little school has put out more great basketball players and football players than any other school in Oregon and it is not even close.  They may be underdogs and outnumbered and outmanned but the heat rising off the Football field and the heart pounding in the halls at Jefferson High the last couple of years is palpable- and it is getting louder. They are slaying giants despite the setbacks over at Jefferson!

Editors Note:  Because the Concussion and Traumatic Brain Injury crisis is threatening the game and the kids that there is more and more emphasis on numbers.  Teams with fewer than 50 players should in my view be able to play their young kids up on Varsity and have exemptions to these arcane rules.  We should be keeping a play count and not a quarter count.  If this young man who played causing the forfeit was needed on varsity he should be allowed to play.  The only rule we need is to prevent kids from playing too many downs in a week- as it is this has to do with quarters regardless of plays.  We have so much work to do and yet so little seems to be happening.