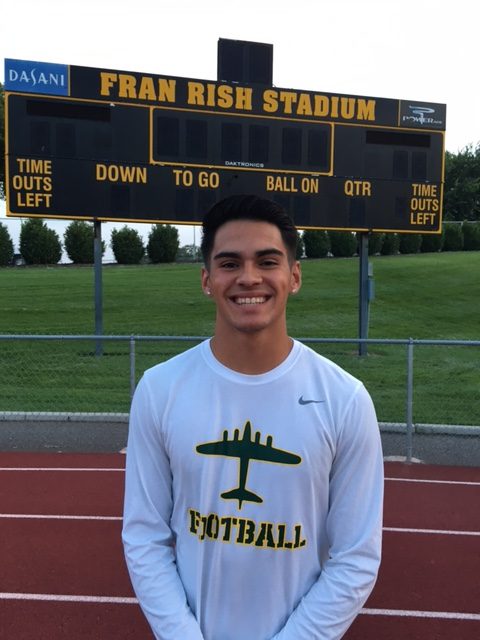 428
SHARES
ShareTweet
Get The Latest

Two-way players at the high school level are of high value for many reasons.  I found one of the best two-way players in the eastern side of Washington and he comes from an extremely successful program that is rich in tradition and success who just last season in his junior year played in the State Championship Title game at the Class 4A level. Josh Mendoza is a 5’ 10” 163lbs. Class of 2018 WR/DB from Richland High School in Richland, WA. Josh was named a Second Team All-League selection on both sides of the ball as a wide receiver and as a defensive back from the Mid-Columbia Conference last year in his junior season. He is a three-year starter for the Richland Varsity Football team. Mendoza also was named to the NWPR 2017 Preseason Top 5 Defensive Backs for Eastern Washington list.  Josh is also an outstanding baseball player as he is a FOUR-YEAR starter on the Richland Varsity Baseball team and has been a two-year All-Conference selection in baseball. If all those accolades aren’t good enough news about him, to top it all off, Josh excels at a very high level in the classroom as well, carrying a GPA of 3.79 and a SAT score of 1020 (two-part score).

When I reviewed Josh’s junior season highlight film I see a player who plays fast and physical, has great quickness and is a GREAT athlete (as evidenced by his listed 39-inch vertical jump). On film, there are a lot of opposing players deliberately dropping passes in hopes of avoiding getting drilled in the chest by Josh. I also see wide receivers deliberately avoid blocking Josh in hopes of not having him blow them up at the point of attack. It’s pretty cool to watch his intimidation on display. On offense, Josh is a great receiver who does an excellent job of creating separation and is outstanding at catching the ball through contact from the defender and is a great blocker also. A play that shows his unreal athleticism that I spoke of earlier, is at the 7:37 mark of his highlight film (I have attached the link to his highlight film at the bottom of the article). Josh blows right by the cornerback with sheer speed and then makes an incredible diving catch in the end zone to show off his athleticism and inner pride in making a tough play.  As a safety, Josh does a top-notch job of screaming downhill in run support and putting a good pop on the ball carrier. Josh played the whole season last year with a broken thumb, so he said he couldn’t wrap up the ball carrier perfectly so he had to make up for that deficiency by hitting the ball carrier as hard as he possibly could to get him down. What a tough kid. I love those kinds of players who are willing to play with injuries and not only play but find ways to thrive and be impact players no matter what the setback is. On the play at the 8:21 mark on his film Josh does a great job diagnosing the swing pass and he immediately flies right to the tailback and beats the block with speed and instincts and intimidation and then finishes the play by blowing up the tailback. I also find even more versatility of Mendoza on film as he delivered legitimate booming punts of 51 and 59 yards. This kid is truly a complete football player.

When Josh and I met at legendary Fran Rish Stadium recently, we spoke about what he thinks is his best attribute he brings to his team. He said “I have a fearless attitude. I have been called upon this season to be the hammer, the guy who punishes opposing players.” That is a great attribute to have because not everybody that plays football likes to be physical. We have all seen those players who do not like to throw their body into the fray because it is scary and it can hurt. We all have been frustrated also as we watch those kinds of players who are afraid to get physical. Well, we do not have to worry about Josh Mendoza because this guy is tough as nails and he relishes his role as being a guy who brings it with force. Josh said he gets this fearless attitude from someone particular, “my dad (Danny Mendoza) was on the wrestling team at Eastern Washington University and he is the person where I get my toughness from. My dad was my coach growing up and that is how he taught me to play, he taught me to hit, hit often and hit hard.” Good job dad. Your son is one tough football player.

Josh said he spent every day this summer working with Harry Peoples, the former wide receiver for the University of Louisiana Lafayette and pro football player. Josh said the two of them worked on developing, even more, speed and quickness and sharpening his route running as a WR. I can’t believe how good this guy is going to look this season as a senior.

On the recruiting side of things, Josh said that he has had some interest from Central Washington University in the manner of phone calls from their coaching staff and Josh said CWU likes him on the offensive side as a receiver.  Carroll College is also showing interest in Mendoza as an Athlete who they like on either side of the ball for the next level.  Both of those are very good football schools. I think as Josh’s senior season winds along and his team makes another nice run at a State title game I think the recruiting side of things will start to shape up quite nicely for this kid.

The Richland Bombers have a great tradition in sports and their football history is very impressive. Josh explained to me what it means to be a part of the great tradition of Richland High School football. “I don’t put on my football jersey and uniform just to look cool, I don’t play football to get noticed, I wear the green and gold to represent hundreds of years and hundreds of families who have built this city and that tradition means a lot to me and I respect what the people of this city and the people of this school have done in the past. The core of our team has all played football together since we were 8-9 years old and for all of us, all we wanted to do as kids is play for Richland HS in Fran Rish Stadium when we got older. Our team is not eleven guys who are all going Division 1 but what we are is we are a bunch of small guys who are a family and we have a strong bond and that is where our power comes from.” That is great stuff from this young man. That is the way it should be. That is why football is the greatest sport on the planet to me.  It is so refreshing to meet a young athlete like this guy.

This Richland football team is brewing up something special for this season I have a feeling. When I asked Josh what it meant to play in the Washington State Class 4A (highest classification) Championship game last season this is what he said, “there really are no words to describe what it is like to play in the Tacoma Dome for a State Title. It was so great to play in front of all our fans that made the trip to Tacoma.  Coming so close last year but ultimately being on the short end of that title game, it makes me want to get back there so bad for another chance and it is what has been pushing me all offseason.” I expect the Richland Bombers to be right back in the late stages of the Class 4A State Playoffs and on the doorstep of competing for another State Title again this season. Josh Mendoza, I guarantee will be right at the front of the team as one of the catalysts to carry this great team. I wish you all the best this senior season Josh.

Here is a link to the hudl highlight film for Josh Mendoza: