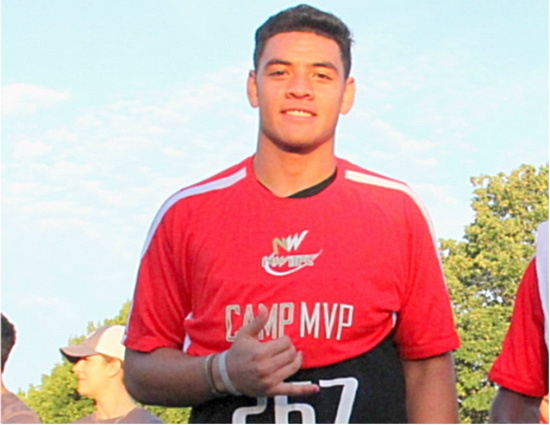 There were a couple of boys from the 808 at the Northwest Elite Football Camp which is the biggest camp in the Pacific Northwest. Yesterday in Renton, Washington Kahuku’s Kesi Ah-Hoy showed up and showed out winning the Camp MVP out of 600 athletes in the Running Back position.  IslandPreps.com was there and caught him in action live.

Kesi ran dozens of routes against linebackers and showed nimble feet and great hands in the drills.  With over 30 colleges in the house including Utah, WSU, OSU, UW, ASU, USC, Boise State, and most of the Big Sky and 20 other colleges in attendance the campers had a big stage to shine on.  Kesi did that.  We know from his work at Kahuku he is a power back.  But he was tested here over and over and was visible a bit winded in the unexpected heat as were all the boys.  The format featured almost 3 hours of non-stop drills and most of the 1-1 action was the passing game.

Ah-Hoy looked sleek and capable of hanging with the best of them.  His Camp MVP was noticed by all in attendance.  Oregon State had at least 10 coaches at the Camp and took the opportunity to make the 2017 State Champ and Red Raider an offer.

We are not sure if they know Kesi is related to the former Red Raider and Beaver great and NFL star Al Afalava but it is entirely possible that the Beavs are looking to strike Gold again with this offer.

Kesi was at The Opening Regionals in Seattle last weekend and stayed over for the @NWEFC Camp and today heads to Washington State to take a visit and get in a work out perhaps before he heads home to the Islands for the GPA Camp next weekend at the UH.

Enjoy our 1-1 Interview with Kesi where we were struck by the humility and composure of this young man; something we have a true appreciation for from the people and athletes that come from the great Kahuku community.  Kesi will have more offers- and if he does not he can not lose.  The kid is a winner all the way!