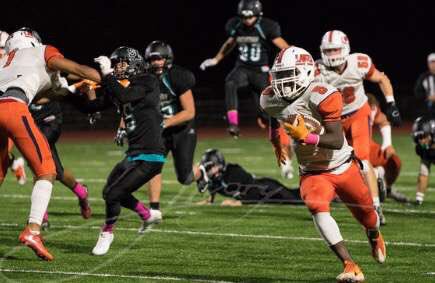 295
SHARES
ShareTweet
Get The Latest Kahlil Lewis of the Lakes Lancers is one back who has his stock rising as he reaches the 1,000 yard mark.

On that night the Junior RB went for 5 TDs and 397 yards.  This past week he again had a nice night and his total through 7 games for the 5-2 Lancers is now at 906 yards with 11 TD’s.  He is also playing defense and the majority of the games for the Lancers who Coach Dave Miller once again has humming right along.

Kahlil is getting some nice help up front with his O-Line doing a great job of opening some holes for him to work.  Still raw, Lewis is a straight up strider with a nice burst and the ability to make things happen.  At times he seems to glide up the field and when met with contact he does a nice job of using his frame to blow up the play for a few more yards.  A physical back with a nice mix of skills describes him well.

His speed while average right now is deceptive and we think that well is just being tapped as we speak.

“My Coach and I are working on my speed and conditioning right after the season starts,” said the nifty Lancer.  “Also this will be my first year of running track!”

I will repeat this over and over – if you are a skill player (which I think is OL but others feel RB,DB,WR, Etc) then you have to run track.  Speed is not everything- it is the only thing that matters at the highest level- or so some say.

“I’ve been playing running back for 4 years now. I honestly think my best asset is my physicality. I feel that I am an aggressive runner, especially behind my OL when they open up holes a mile wide,  it’s hard not to hit it hard and break for big gains!” Check out this great mix from our pals at NW Ballers- and see his HUDL link below.  Another great Sleeper Recruit being exposed right here at NWPR!   HUDL SEASON HIGHLIGHTS VERY WELL DONE- WATCH HERE

Caden Townsend Brings High Motor To Prep
What Can Football Recruits Do Now To Gain Attention Of A School And Grab An Offer?