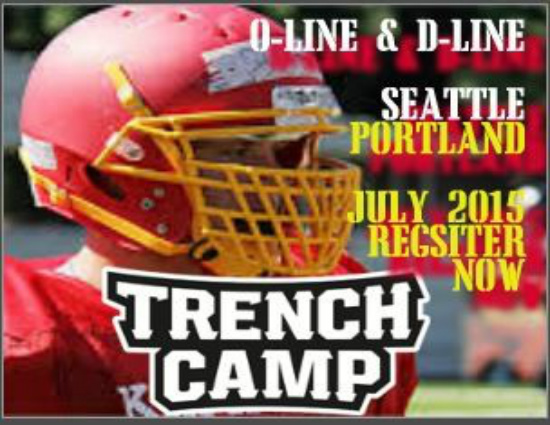 Pacific NW Linemen on both sides of the ball will want to turn their attentions to the upcoming TrenchCamps.  The most well run and most complete camp in the Nation for Linemen is back and this year has a camp in Portland and later one in Seattle.  NWPR staff regularly attend the camp and the technique being taught here is a game changer.  You will learn from NFL ALL Stars and Hall of Famers in a unique padded event where technique is taught and then applied and done so over and over leading to total improvement.

The 2015 Trench Camps in Portland and Seattle promise to be very special indeed!

This is one of the only camps to come around for Linemen and rare in the US or the world.  This is the mecca of technique coaching for those athletes wanting to master line play on both sides of the ball.

Here is the info you need- TrenchCamp and the staff have a 5 Star endorsement from us!

FOR IMMEDIATE RELEASE
(Portland, OR)  Trench Camp is growing every year, as evidence by a second camp being added in Seattle this year and several new members coming to the Trench Camp team.  Trench Camp is exclusively for offensive and defensive linemen.
The Seattle camp runs July 29-31 at Arlington High School and features members of the Portland coaching staff including Stan Brock and Manu Tuiasosopo.  However, the Seattle camp also features some new faces including Cowboys and Raiders standout, Kevin Gogan.  Gogan was part of a legendary offensive line in Dallas that included Nate Newton, Mark Tuinei and Eric Williams.  The line protected Hall of Famer, Troy Aikmen, and opened huge holes for another Hall of Famer, Emmitt Smith.  Gogan won 2 Super Bowls with the Cowboys and was also an All Pro on multiple occasions.
Trench Camp co-founder, Stan Brock, says having someone of Gogan’s stature (both literally and figuratively as Gogan stands 6’7”) is a huge pickup for the Seattle camp, “Kevin was on one of the greatest offensive lines of all time and he’ll bring that level of expertise with him to our Seattle camp.  It’s great to have him as part of the team”
In Portland, the camp welcomes defensive standout Keith Millard as well as San Francisco 49’ers standout, Guy McIntyre.
Millard was a standout from Washington State University that was named to the 1980’s NFL All Decade defensive team.  He was also the NFL Defensive Player of the Year in 1989.
McIntyre blocked for the likes of Joe Montana and Roger Craig while the Niners were racking up Super Bowl wins.  He’s a 3-time Super Bowl Champion and 5-time All Pro.
Trench Camp is truly a one-of-a-kind camp and offers more former NFL linemen as coaches than any other camp in the country.
The Portland camp takes place at Lewis & Clark College July 10-12 while the Seattle camp starts its run at Arlington High School in Arlington, WA July 29-31.
Go to www.trenchcamp.com for all the details.