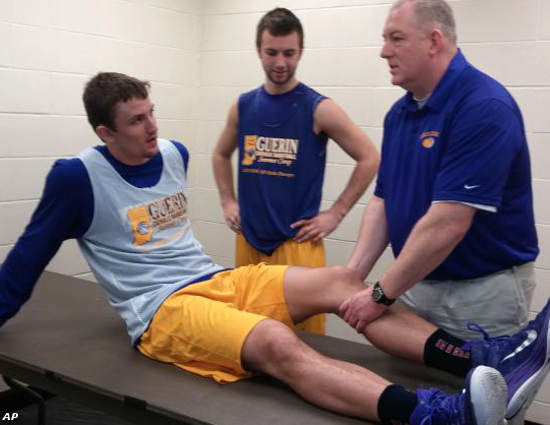 NEW YORK — To toughen safety standards in youth sports, medical experts are turning away from lawmakers and toward high school sports associations to implement policies and procedures to prevent deaths and serious injuries.

The National Athletic Trainers’ Association and the American Medical Society for Sports Medicine completed two days of meetings and programs with representatives from all 50 state high school athletic associations Friday at the NFL offices in Manhattan. The goal was to have decision-makers return to their states and push high schools to put into place recommendations on how best to handle potentially catastrophic medical conditions such as heat stroke, sudden cardiac arrest and head and neck injuries.

Some states, such as Arkansas, have passed laws requiring schools to meet certain standards, but Doug Casa, director of athletic training education at the University of Connecticut, said high school associations should be first to act because they have more flexibility to move quickly.

“Trying to get a state law passed, one, can take a long time but two, sometimes a lot of things get attached to the laws that weren’t the original intention. Also, they’re written by people who don’t truly understand the nuances of a football practice or how sports work into the system of a school year. Those are nuances that the state high school association totally gets,” Casa said.

In 2013, best practice recommendations were published in the Journal of Athletic Training, but many states are still lagging in implementation of those guidelines. They include having a full-time athletic trainer on staff, having automated external defibrillators in every school and accessible to all staff members, and having an emergency action plan for managing serious and potentially life threatening injuries. Funding is often cited as the reason schools, many of which are already struggling to make ends, meet fail to implement these recommendations.

According to the NATA and AMSSM, only 37 percent of high schools in the United States have full-time athletic trainers. Only 22 percent of states meet the recommendation that every school or organization that sponsors athletics develop an emergency action plan. Only 50 percent of states have met recommendations that all athletic trainers, coaches, administrators, school nurses and other staffers have access to an automated external defibrillator.

Casa said just 14 states meet the minimum best practices with regard to heat acclimatization, but the ones that have adopted them since 2011 have had no athlete deaths from heat stroke.

Casa cited Georgia, Arkansas, Texas, North Carolina and New Jersey as states that have been leaders in implementing the recommendations.

Jason Cates, a member of the executive committee of the Arkansas Athletic Trainers’ Association who led reforms in Arkansas after a high school basketball player died of sudden cardiac arrest in 2008, said that while legislation can be help to move programs forward, it can also create problems with legal liability.

“At what point in time are we going to legislate ourselves out of sports?” he said. “I think in some states, in some instances (legislation) is the way to go, but my hope is people just get it.

With legislation comes politics and give and take. Kevin Guskiewicz, professor and co-director of the Matthew Gfeller Sport-Related Traumatic Brain Injury Research Center at the University of North Carolina, said that doesn’t come easy for medical professionals.

“It’s hard for people like us that are medical people to compromise on anything because we think we should have it all,” he said. “So that’s where we’re beating our fists on the table at state capital buildings as we’re debating why we need it all. I did learn a lot about compromise.”