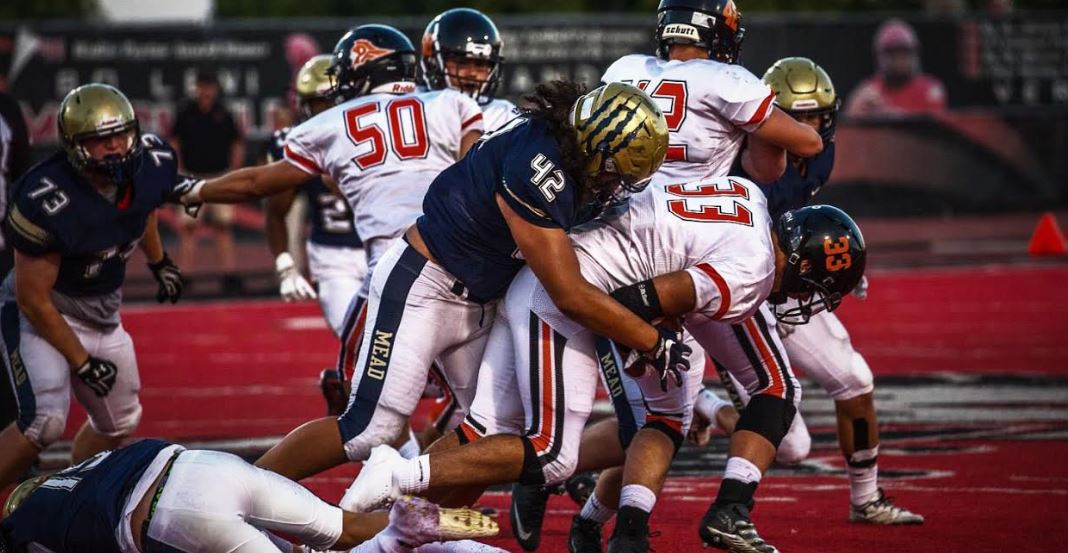 159
SHARES
ShareTweet
Get The Latest

When I started writing articles for Northwest Prep Report a year ago I quickly learned something. The city of Spokane, WA. has some great football players. There is another STUD from The Lilac City that is going to be an absolute monster in the Greater Spokane League this season. Nathan Puletasi of Mead High School is a 6’ 3” 265lb Class of 2019 Defensive Lineman. Nathan is a two-sport athlete, as he throws the shot put and discus for the Panthers Track and Field team and he is doing
great work in the classroom as well, with a 3.61 GPA and 1180 SAT (two-part score). Nathan Puletisi is on he verge of Pac 12 offers now as he enters the 2019 season.

I asked Nathan what he considers his best attributes to the game of football and to his team, he said “I think my best attributes are my size, strength, explosiveness, my urge to master my craft, competitiveness, leadership, and my willing to try and better everyone on the team on and off the field”. Nathan has put a lot of good work in this offseason to prepare himself for the upcoming season.

He recorded a 4.9 second 40-yard sprint, 335lb bench press, 445lb squat, 265lb power clean, 485lb deadlift.  While reviewing Nathan’s 2017 Junior season highlight film (I have attached the link to his junior season highlight film and his 2018 camp highlights below) I was very impressed with his ability to get his hands into the offensive lineman first and two gap him and then shed the blocks and use his athleticism and quickness to make the tackle, as seen on plays at the 1:22, 2:50, 4:27 marks of the film. He demonstrates very good explosion in the backfield tracking down the quarterback at the 1:48 mark of film. One other trait I love about Nathan is that he plays with a high motor which is of extreme importance, see the play at 2:25 and 3:09 marks of the film for evidence of this.

Family bloodlines is something I always am intrigued by regarding a football player and Puletasi has some impressive bloodlines to say the least. His uncle is Joe Salavea who played in the NFL and now coaches the defensive line for the Oregon Ducks, his cousin, Sonny Puletasi played football at Wyoming University, the legendary Troy Polamalu of the Pittsburgh Steelers is one of his cousins, his brother Tyler Puletasi played football at Eastern Washington University, and his sister Tifa Puletasi played basketball on a full ride at Saint Marys College.  That is a very impressive athletic family to say the least.

We want to wish Nathan a very successful senior season and we look forward to his progress and his decision on where he attends college as he will have plenty of options available. Here is a link to the junior season Hudl highlight film for