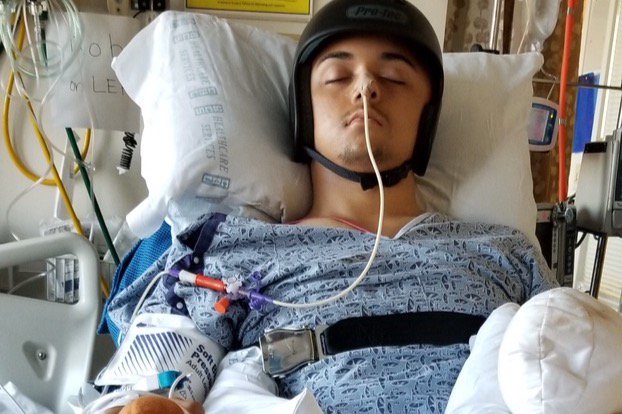 Boy, what a game we saw last Friday at Hillsboro Stadium in Hillsboro, Oregon.  It was the #1 Clackamas Cavaliers battling the #8 Central Catholic Rams.   About midway through the 1st half, as I worked the sidelines shooting pics and taking game notes, a huge hit took place.  Next to me was Kevin Menten from @OutsideTheGames.  Nationally ranked Junior QB Caleb Jordan handed the ball off on a sweep reverse and went out for a pass.  The D1 prospect broke up the field and went up for the catch reeling it and was pasted by one of the Rams.

Down he went, the sound of the blow echoing across the stadium.  It happened so fast there were calls for targeting.  As Caleb sat there after the blow all could see he was stunned a bit.  We reviewed the film on Kevin’s camera- a big hit but it was clean but at that moment only he and I knew this was not a shot to the helmet.  The referee sent Caleb off and the he headed to the bench.  A few plays later Kevin and I headed to the other end zone-  we passed the trainer checking him out.  Caleb was smiling and looked fine and she was doing the protocol to determine his condition.

Standing at the other end of the field a turned to see the trainer there next to us and Caleb back on the bench.

A young ball boy approached us and asked her, “Does he have a concussion?”.

“That is none of your business,” she retorted bluntly.

“Good for you for asking kid,” I said. “Good question!”

She fired back at me, “That is certainly not a question some media guy needs to be asking”.

I stopped for about 3 seconds and fired back, “That is a question we should all be asking.  Even though I did not ask I will always ask if I feel the need.”

She was not having it based on her body language so I nicely explained why.

“I have been to 5 funerals for High School football players, I direct a not for profit for brain injured high school football players, am a mandatory reporter, and will always ask questions.  We all should be asking that question all the time because we are all part of the solution,” I said nicely with resolve.

She was stunned- seemed put off- but I bet she has never been to a funeral for a kid that the game killed from a blow like that.

I told her I saw her do her job and it was a good one.  She did it all right.  As I looked back to the bench Caleb had gone back in the game but another Cavalier had taken his place and was throwing up under the tent.

“Now this guy is one you better check on,” I said as she hustled to his aid.

She is in my estimation is a  good trainer.  But no one should ever believe that we all do not have a right to be a part of the solution to the problem that is destroying our game.  The kid should be encouraged to always ask.  Media people have a huge role in the solution to this matter and we are in a position to support and report when we see these issues play out on a field.   So please ask- always ask.  And I hope she can realize we are not the enemy.

I have been working on this issue since 2008 with our group Brain Champions who has assisted the Concussion Legacy group get going, pass State laws, and supported dozens of players and their families.  We work with the family of Junior Seau and other NFL players but mostly we educate about concussions, CTE. Second Impact Syndrome, and the dangers of returning to play too soon.

A few years ago at a playoff game a star player, like Caleb, went down on the 25 right at my feet after being blasted and threw up as he hit the ground.  His right hand seized up in a curled motion and he was clearly stunned.  He was down in the pile for about 5 seconds like that until the ref unpiled them and his team mate pulled him up.  He wobbled off in the wrong direction and the referee did nothing despite me informing him that the kid was vomiting and hurt.  An assistant of the opposing team asked me what happened and I told him- he told his head coach who went to the head referee.  The athlete was removed just before the next play started and did not return.  That was my right to say something.  How can that be wrong?  It can not. In closing I will just say this –  Isaac Verduzco of Eisenhower HS in Washington went down a month ago and had a severe brain bleed.  He was playing after having had a concussion 3 weeks prior and was popped again and went down with a traumatic bleed.  Maybe someone could have asked a question for him or a kid like him a bit earlier and he would not have returned so soon.  Because of this and #ForIsaac and Matthew, and Zach, and Bobby, and Max, and Drew, and Kort, and Junior, and Dave, and Andre, and Mike… and so many others… I will always be watching and reporting and asking.

SO no matter who you are NEVER tell someone they can not ask the question, to show concern, and to try and help save our game.