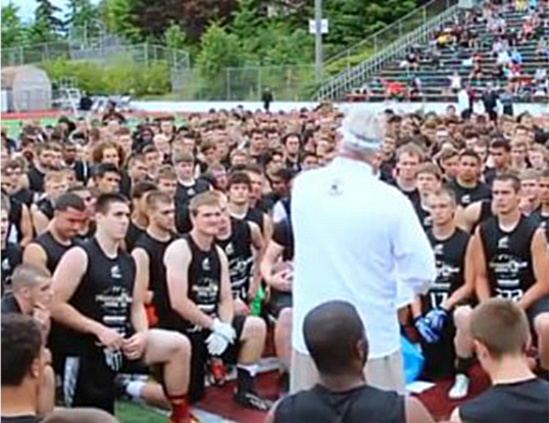 Yesterday the NCAA instituted a new rule banning D-1 College Coaches from traveling to “satellite camps” preventing teams from holding camps for high school players anywhere but on their own campuses.

This rule change is effective immediately. Colleges participating in or hosting satellite camps won’t be able to hold them.

The NWEFC Camp in 2015 saw 800 recruits and 30 colleges come to coach and evaluate athletes.

The NCAA issued an “academic integrity” proposal which was then adopted by the NCAA’s policy-making Division I Council and announced on Friday. Here is the official release regarding the new rules by the NCAA:

“The Council approved a proposal applicable to the Football Bowl Subdivision that would require those schools to conduct camps and clinics at their school’s facilities or at facilities regularly used for practice or competition. Additionally, FBS coaches and noncoaching staff members with responsibilities specific to football may be employed only at their school’s camps or clinics. This rule change is effective immediately.”

Jim Harbaugh is being blamed for much of this as the Michigan Head Coach and master recruiter had camps all over the South and in the heart of the SEC where hundreds of top recruits would show up and be evaluated and recruited to Michigan.  The SEC is undoubtedly regarded as the “Power” Conference in the US and it is clear their Head Coaches and athletic departments bristled at the idea of schools like Michigan coming into their territory.

Take a kid from Florida or Alabama that is a top recruit who wants options.  There is no way most of them could ever afford to travel outside of their own State let alone to place like Michigan or Oregon or Utah.  This rule seems to be one that was orchestrated by the Eastern power schools and shoved down the throats of the rest of the Division 1.

Closer to home here I have covered Camps extensively for 15 years.  It was not that many years ago (9 I think) that hundreds of D-1 Schools would attend Nike and other sponsored events and combines and be evaluated and recruited.  I remember a story from 2007 of one of Oregon’s top recruits meeting and being seen by over 100 top D-1 programs all in 1 day.  He had 1 plane ticket and 1 stop and he blew up to a 5 Star recruit.

That was a combine and shortly after that Coaches attending combines was banned.  The focus went back to recruits travelling to whatever colleges they could to be seen.  Film in those days was rare and expensive to produce.  For quite a long time services like Rivals and Scout ruled the world on getting top recruits noticed but the kids had to be lucky enough to get to their events as well.

Then in about 2010 Jason Gesser (former WSU QB) decided to host a camp in Seattle and invite WSU coaches and some other schools to attend.  I think the 1st year he had 5 D-1 schools there and maybe 300 kids came.  The years that followed the camp became known as the Northwest Elite Football Camp and as many of you know last season it saw about 800 kids attend and compete in front of 30 college coaching staffs making it one of the biggest camps of that variety in the US.

After the NWEFC came the Rough Diamonds Camp also in Seattle with 30 schools annually attending and hundreds of kids attending that.  It too was a huge opportunity and success.

Top Recruits like Zaryk Davis (Scappose-Or- 2017) and Ali Gaye (Edmonds-Woodway-WA-2017) were discovered and recruited at last years RDAF Camp by D-1 Coaches. Guys like them will loose under the new rules.

Now camps like these and the PIAA Combine and Max Exposure Camp in Hawaii have been amazing opportunities for schools to come and find great recruits they would have never otherwise seen.  For the kids in vast underpopulated or isolated places like Oregon, Idaho, Washington, and Hawaii these camps were the best and only way to stand out to a lot of coaches.  To reach that many coaches now will cost thousands if not tens of thousands.

It does appear that the D-1 AA or FCS coaches will still attend these sort of camps and the NWEFC and Rough Diamonds Camps are both slated to go ahead in the next few months and recruits are wise to attend both.

WHAT DOES THIS MEAN AND WHY?

The NCAA as an organization in my opinion is corrupted by power.  This move is about Money and influence and has nothing to do with the kids or academics or integrity.  Let’s be clear.  The NCAA is an employer in my view of the athletes and this just made it a whole lot tougher to get a job at the Nation’s power schools.  It also made it a lot tougher for most of the D-1 Member schools to compete.

Nothing about this rule helps the kids.  But should we be surprised?  The NCAA had no concussion policies or protections until High School football took notice led by Washington’s Lystedt Law in 2009.  Zack Lystedt and his Father led the charge taking the cause and request for rule changes to the NCAA and NFL and it took years to get where we are now.

Athletes in college report being hurt, playing hurt, having a lack of food and basic needs, and more.  The system is a mess and this rule just makes the NCAA feel more like a Monopoly or the Mob.  Truth hurts but someone has to say it.

This rule hurt our High School football prospects 10 fold over any good it did them.

WHAT TO DO NOW?

Given this new NCAA rule what should recruits do?  Well we have always had a simple set of rules and guidelines we apply to any High School recruit to win the recruiting game.  Here are my thoughts moving ahead-

NWPrepReport has always been here to tell the story of the NW football athletes.  That will never change.  If you want our help send us your HUDL film link and info and we will jump in however we can.  Email Dirkknudsen@gmail.com