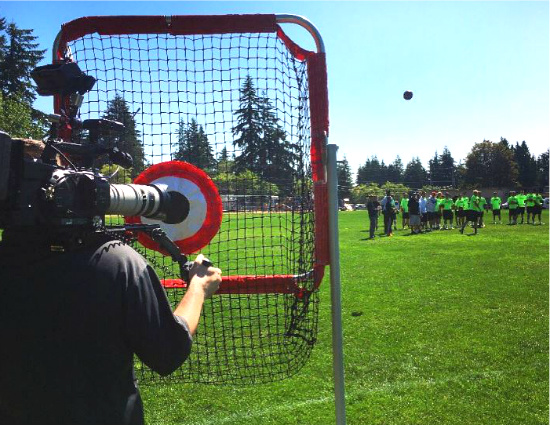 The NW 9 presented by Boeing and Root Sports NW has ended the second day and 28 of the best QB’s in the entire West have had quite a time so far.  As soon as they checked in these gunslingers were geared up with some awesome NW 9 gear and off they went for meetings, work outs, and an amazing surprise.  Late yesterday the group was told that Root Sports was making the Skybox at the Safeco Field available for the Red Sox versus the Mariners game!  The word we got that these seats were “sick” and that these top guys made fast friends across he board!

Now more then anything that might get these guys stoked is the fact that ROOT SPORTS NW is working on a Cable Special that is planned to be brought to viewers in 2 parts in late August and that means footage and lots of it is being shot but the Root crew!  All the QB’s in attendance and the skill athletes invited, which 35 of them showed up today, are trying to stand out and land their moments of fame!  And to be seen by Coaches in the West on TV is a big deal for all of us!

I myself am hoping to get in on the action in the AM as I get there- it should be a lot of fun!  Check these guys out!

INSIDE THE CAMP STARS ARE RISING UP

Word from inside the Camp at days end is that a few guys are rising up.  At the end the Top 9 regardless of graduation Class are going to be named.  Let’s face it- all these guys are college prospects and all of them have won by just making it to the event.  Today at the 1/2 point the camp staff voted on where we are at for the top performers.  Here is that list:

At #1 so far is Drew Korf of Boise.  We saw him earlier this year at the RDAF showcase and that earned him enough press to help get him here.  But Korf is taking things to the next level and has really been on top of his game.  The 6’1″- 180 lb. Senior to be ran the fastest 40 today and did everything well.  He had 2500 yards and 24 TD’s last season with a 70% completion ratio.

At #2 is Scout 4 Star Qb Dylan Morris who has schools circling and Pac 12 written all over him.  He will only be a Sophomore and is going to be a super-recruit it looks like.

At #5 is Christian Moore from Bellarmine Prep doing what he does and he holds 2 D1 offers right now.

#3 is Battleground human highlight Gunnar Talkington who is impressing more and more everytime he takes the field.

At number 4 is Kaden Jenks of Royal- a small town QB who looks like a proto-type All American and he plays like one. He has a nice Big Sky offer from Weber State!

This list will move all over the place and every QB is in contention.

Besides Root Sports NW,  NWPR, and Northwest Elite Index we expect Scout to make it out.  We also are so happy to inform anyone who did not already know that the very popular site and analysts form QB Hit List are in the house and reporting to their 10,000 plus followers; a majority of whom are coaches!

Let me put it this way – between the athletes, the analysts, the coaches, and the fact it is going to be televised as a feature -well safe to say this event is unprecedented.  The NW 9 is the Nexus of  the best Talent from all 3 – Athletes, Media Analysts, and Coaches.  We are very proud to be a part of it!