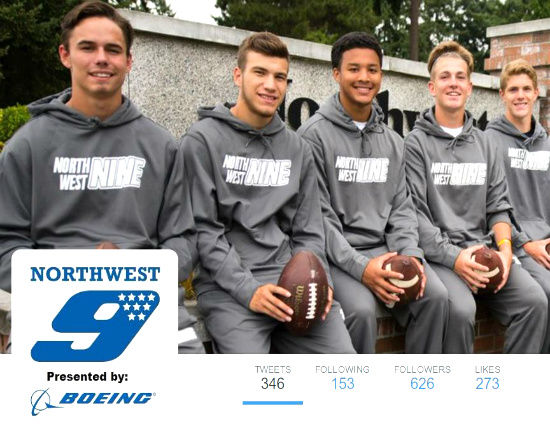 Next week at NW University in Kirkland, Washington most of the best Quarterbacks in the Pacific Northwest will come together to compete in an epic week long training camp known as the Northwest 9.  The event now in its 2nd year the event organized by Taylor Barton is considered the best QB event in the nation of this kind.  Taking a page from the Elite 11 this event brings in 36 Quarterbacks who earned a nomination to the finals to throw down in skills and drills to determine the 9 best overall QB’s regardless if graduation class.

This year Northwest Prep Report, Northwest Elite Index, and Barton Football helped work out something that no one has ever been able to do in the history of the Pacific Northwest.   In a bold announcement the NW 9 Staff let the world know by Twitter that the event will be sponsored by Boeing and will be aired as a TV special in late August on Root Sports NW.

For the first time ever at any camp the National cable companies will take a stand and deliver a great insiders look at the camp.  NEI and NWPR will be in the house analyzing the QB’s and casting ballots for the finalists in concert with other camp staff.  A War room will be set up to break down players skill sets and provide the board with feedback and analysis to determine the 2016 NW 9 who will earn their awards on Thursday of next week.

We are so very pleased to be a part of this event- NWPR and staff were the first group to bring news to the works of the many great players we have in the NW starting over a decade ago.  Barton and NEI followed and no doubt many many bloggers and analysts have followed this lead.  But innovation, safety, excellence, and true leadership mean we have to push things to the next level.  And so we have.  Look for news and tweets and stories from Camp.

Look for 36 great kids to have an awesome week with  special film sessions, some surprises, and of course amazing action with 1 on 1 and 7 on 7 with about 40 of the premier skill players in the NW joining the QB’s on Tuesday and Wednesday afternoons.

ALSO A CAMP FIRST–  NWPR as a Regional Rep for Gamebreaker Helmets is pleased to announce that all the Skill Players will be wearing the Gamebreaker Helmet. Thanks to Tracy Ford for his help in keeping our NW boys safe.  If any of you want or need helmets for your guys at cost call me at 503-799-8383 and we will provide that option to you.

This camp and the resulting TV show is going to give these athletes exposure like no other event as the show will air we think August 25th and continue to run after the initial show- look for yours truly to be on camera digging deep into what makes these QB’s so special!

Last years group includes no less then 8 NW Seniors who went on to play College Football with all the QB’s grabbing attention and several underclassmen using this event to spring themselves to the top of 2018 and 2019 classes including exciting Dylan Morris of Graham-Kapowsin who is a 2019 QB that was just given his 4th Star by Scout.com!  Morris returns to the NW 9 This season.

Here is the preliminary list of QB’s and Zac Schmerber of Westview High in Portland has now been added.  Get ready for the time of your lives for those attending and thanks to Boeing for such a terrific sponsorship!  The kids deserve this one.

See you at camp!