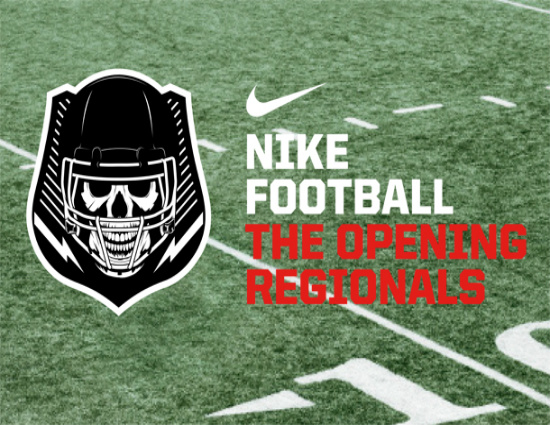 Tomorrow the University of Oregon will be ablaze with high school football action as 500 of the best athletes in the United States gather in Eugene, Oregon to battle it out.  Nike is branding this camp under a new name, The Opening Regional, but it is the same great camp that has been known as the Nike Football Training Camp for many years now.  The event is sponsored by Nike and while we won’t see any collegiate coaches in the house we will see major talent.  The Camp at Oregon is always the last one in a Nationwide series where the Nation’s best are invited to attend and compete.

The Nike Opening Regional Camp is in Eugene tomorrow.

The Nike Staff along with the staff of StudentSports.com do a masterful job of creating an NFL style camp that is fast paced and pushes the athletes to “show up and show out”.  Many Media outlets are in attendance and a good performance can raise a recruits stock big time.  The Nike and SS staff will be looking for a few special kids and top performers to extend invites to The Opening at the Nike World Campus this July and that is he biggest High School football event in the US in terms of prestige and importance.  So a lot is on the line for these guys tomorrow.

The NWPR staff will be in the house with cameras rolling and we have reviewed the list of almost 500 top prospects coming from all over the US, Canada, and Samoa to compete.  The number of top prospects, including many 3 and 4 Stars, rolling into Autzen Stadium is going to make this one a camp to remember.  We have taken the time to identify all the NW athletes who have registered to attend and want to mention them here!  Good Luck to all these top prospects heading to camp!

Look for Camp coverage and pics all day via our FB Page and Twitter Feed too!