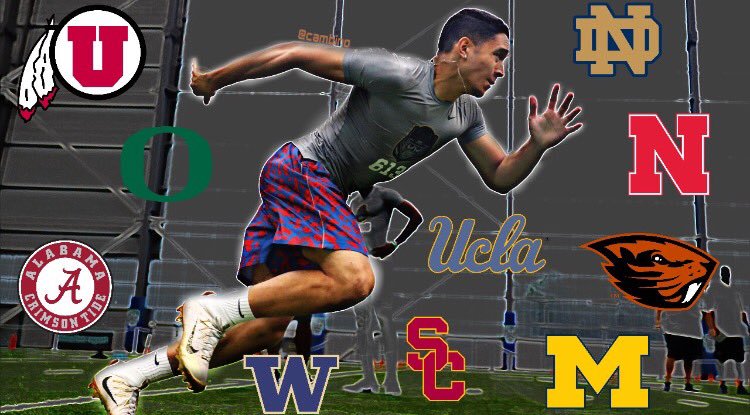 Those of you who have been following High School football in Oregon the past 15 years know how many D1 athletes have made it out of here.  You will also agree, that being the case, that the numbers have risen greatly over the years.  When I began to write for Rivals over a decade ago we might have averaged 1o Division 1 athletes who would sign with a college on National Letter of Intent Day.

Each year these numbers have risen and we now regularly have classes that graduate 20 plus D-1 and D1-AA recruits.  Many more move on to the JUCO – NAIA levels.   Each year has featured a few 3 and 4 stars and a lot of 2 Stars.  To date, Oregon has only had 3 Five Star Recruits (Owamagbe Odighizuwa – 2010 David Douglas, Colt Lyerla – 2011 Hillsboro, Thomas Tyner 2013 Aloha).  This season we have another and by the end of the year we should see two in this Class alone.

One thing is for sure.  The 2018 Oregon HS Recruiting Class appears to be the best ever in terms of athletes with D1 offers and in terms of guys at the Top.   Oregon now has 18 D1 athletes with offers so far and we have 16 with 3 to 5 Star rankings.  That is an unprecedented group and something our brand of football can boast about.

Leading this amazing group is a group I call the Fab Four!  These 4 athletic supermen are all capable of tipping the scale of a game by themselves and are all going to move on to the highest ranks of college.  In week 1 they all shined and set the tone for what should be an amazing season; one for the ages no doubt.  Let’s have a look at these guys and what they did in week 1. Talanoa is a 5 Star Phenom and can do it all.  His speed and agility and ability to explode have him currently rated as the #1 athlete in the USA.  Out of hundreds of thousands of kids, this is the guy that National Experts rated #1.    He is as much of a blue chip as we have ever seen and has the potential to play Sunday’s, God Willing.  His Top Ten are in the picture above and any team that lands this kid is going to Win the Lottery.  He is that much of a generational player.

What we know is that Chase is the best WR we have seen in decades out of Oregon and he comes from an elite football family with Duck Blood running all through it.  This game-breaker can win a game for anyone he plays for and he has every skill a coach wants in the wide-receiver spot.  He is so talented and has such a high Football IQ that few in the nation are better.

We see a 5th Star in his future and have him as a 5 Star with a cumulative 5.3 rating on our scale.  A host of schools at the Top are in his final list- like Hufanga he can help any program and can play anywhere.  Many see him as an Oregon lock but we wonder if this Star wideout might choose Alabama or Georgia where his NFL stock would be higher.  Time will tell.

Chase is a gamer- he needed three catches for 2 TD’s to help the Panthers to the win over Wilsonville 35-7.  The game featured a nice outing by Senior Robbie Patterson at QB and Jaylin Parnell (RB) who went for 120 yards. Those who watched this kid in his Soph. and Junior Campaign already get it.  He is amazing.  His Junior year was cut short by an injury and recruiting services sort of gave him a cold shoulder and unrightfully so.  But he did enough to land a boat load of offers and become a solid top tier RB for this class.

We know this kid is a record breaker and if he stays healthy he too may climb to 5-star status.  It should be the “Lowe-Show” all year at Jesuit where Coach Ken Potter loved to pound the ground.  Trey has lower body strength and speed rarely seen in High School kids and he too has what it takes to play big on Saturdays and Sundays!

Husky Nation will be seeing #PurpleReign if they cut Trey loose.  He proved against #7 Tigard in the opener that he may have a 2,500-yard season in store.  We love this kid! What can we say about a kid this talented other than WOW.  One of the fastest kids in the USA and an athlete who can do it all.  He wowed us as a Sophomore and has never let up.  He just does it all well and Oregon may be able to use him in as many as 4 spots on the field.  He projects all over the board.

Braden racked up 20 offers before giving a verbal commitment to Notre Dame which stuck for a while but Willie Taggart flipped him to the Ducks and now they have one of the best in the NW coming in next season.  Braden has been recruiting actively for the Ducks and is a real talent on social media!  The kid may well Coach or be an agent after his football days are over and I mean that in the best possible way!  He is smart and sharp too!

In week one he was a HUGE part of the overtime road game against #1 Jesuit – Lenzy led his team in so many ways.  He could not have done any more and was just slightly overshadowed by Lowe.  This kid is a real star!

Ok so that is the Fab Four – they are the best Oregon has this year but there are another 10 right with them who all have offers and who all have teams contending.  Check out the entire Class of 2018 offered athletes and watch for your favorite players to pop up on our lists all season long!  Make sure to submit yourself or your athlete – email me at dirkknudsen@gmail.com.