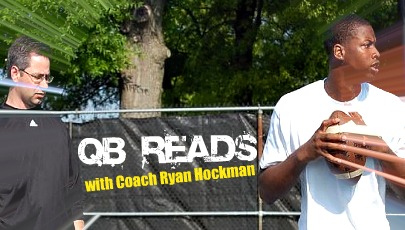 Tim Tebow’s emergence as the starter this past week reminded everyone of the importance of leadership and other intangibles at the quarterback position. Watching Woodinville QB Brett Arrivey this past Friday night I saw a young leader take it upon himself to provide a spark to an offense that was somewhat sleep-walking against an inferior team.

After an early turnover by a teammate, a couple of dropped passes and a few errant passes, the Woodinville offense appeared out of sync in the first quarter.

Perhaps it was the 5:00 pm start or perhaps they didn’t figure on their opponent putting up a fight. Whatever the case, I kept a close eye on the demeanor of their leader, Arrivey.

He didn’t hang his head and he didn’t appear angry at his teammates. Instead, I saw him hustle off the field after mistakes or pat a receiver on the backside after a dropped pass. On the sidelines, he was constantly talking to teammates and coaches.

Arrivey then made two perfect fade throws for touchdowns in the 2nd quarter and lead his team to a score in a 2-minute drill by using both his feet and his arm.

While Arrivey possesses sound mechanics, good arm strength, and decent athleticism, I believe it is the intangibles that make him a college prospect at QB.

Hopefully, with the nation’s attention on Tebow and the intangible traits a QB needs to help his team win, college coaches will start evaluating based on more than just what they can measure.

If they do, I’m sure we will see Brett Arrivey playing somewhere on Saturdays.

While QB Domenic Rockey and his Auburn Mountainview team took their lumps this past week, I believe he is a college prospect based on what I saw at the Washington Preps Camp in July. Rockey possesses the requisite height and arm strength to play at the next level, but more impressive is his accuracy, touch and knowledge of the game.

Having been coached by two knowledgeable passing game coaches in Craig Spence and Jared Gervais, Rockey seemed to understand reads more than any other QBs at the camp during the 7 on 7 period.

Further, he showed both accuracy and understanding of the passing game by throwing into open areas of a zone and by putting the ball away from defenders.

To understand how difficult this is in a camp setting, one needs to know what happens at these camps: a quarterback is thrown into a huddle with receivers he has never worked with and is shown a play on a piece of paper that he may or may not have ever run.

What it demonstrates to me is that he has seen a lot of these plays, the coverages that went against them, and he has taken a lot of drops and has been asked to make those throws. While he was impressive in this situation, I can only imagine how good he can be with more familiarity. I look forward to seeing more.