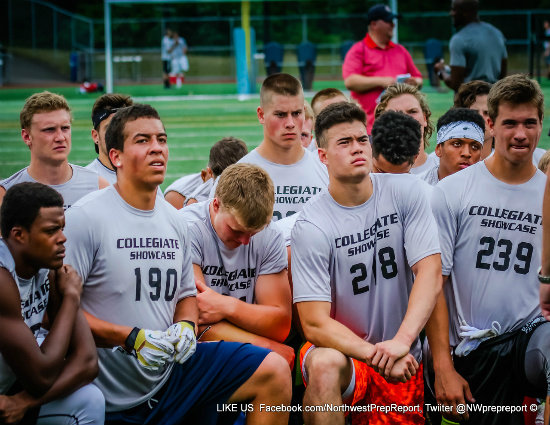 If you were at the Northwest Elite Camp or the Northwest Best Camp on June 3rd, 2016 you were one of almost 1,000 athletes that paid to be seen and compete for the attention of College coaches.  Many of you got your shot yesterday and just as many were probably struggling for some attention.  These camps were great for what they offered and we were wowed as we have shown through our coverage with the talent at the NW Elite Football Camp.

You parents and kids hopefully had a great experience.

It’s a lot to take in isn’t it?  This “Business” of High School football.

Athletes and parents on one side.  Standing across the field waiting for the best to cross are the Colleges and in the middle caught in the cross fire are the High School coaches and their staffs.

Because of the NCAA’s arcane rules the Coaches and Colleges can only see the kids once and a while.  High School coaches can not organize or really even get involved in the off season and that leaves the camp circuit.

The Satellite Camps are needed and they can be awesome!  We saw that at work yesterday as I found 10 new guys who can be top recruits and covered many others who will play college ball that I knew nothing about before I want; let alone all the household names that were there with offers already.

Getting a look at a big Satellite Camp is a bit like speed dating.   Quick hello or two and a few flashes of contact and then off to the next person.  It is what it is- not perfect but still very good.

NWPR Recruiting Tip: The best and only camps you should attend have college coaches and major Media there.  NWEFC did and so will RDAF Camp.  The smaller the numbers and the higher the Coach to Player Ratio the better off you will be.

There is one last camp on June 30th in the Seattle Area at French Field in Kent run by the Rough Diamonds Athletic Foundation.  They have been doing this camp for 5 years now and it is another Satellite Camp but there is a twist.  A Nuance if you will that turns it into a much more intimate 1 on 1 experience for the athletes.

Instead of Coaches at 4 fields looking at athletes all in a 2 to 3 hour window, which is the current format, the RDAF Camp will have the colleges at the Camp all day.

Every Coach at the Camp will just work with one group of kids by position for the entire 2 plus hour session and they will stay and coach each positional group for 3 sessions.  Its a long day for the Coaches but over the past 2 camps more and more coaches have pointed to this format as being the secret sauce to making these Satellite camp work for them and the athletes.

Several Big Sky Schools are Making This Their Only NW Satellite Stop – All The Big Sky should be there! Mountain West too!

ALL COACHES EYES ON YOUR GROUP ONLY

THIS IS YOUR TIME TO SHINE

SMALL CAMP NUMBERS  – This Is The Last Camp

75 spots are Taken for the RDAF Now

Are You Wanting Another Shot or a Better Shot?

We hope we see you June 30th at the RDAF Showcase.

All Info and Registration is Here