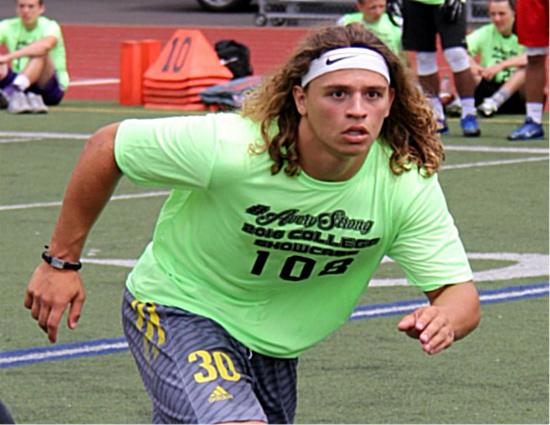 Coverage continues on the RDAF #AVERYSTRONG College Football Showcase today with pictures from Session 2 which featured the Linebackers, Running Backs, and Tight Ends.  This session featured 80 athletes at the most and they monopolized the coaching staff for 3 hours solid.  The camp broke into skill sessions have Reggie Jones and the boys from #RiseFootball handled a great warm up.  The skills sessions were popping with action which led to 1-1 battles and drills and that is where the best talent rose up.

Many of the best took the brass ring and others rose to the position of having options and interest.  Everyone got better and competed.

We have heard nothing but complaints about how athletes go to these showcases with the promise of Media coverage and have walked away only to find no film and no coverage ever follows after the camp directors and sponsors cash the check – not an empty promise we will ever be associated with.

Let’s start this Session 2 coverage with our Photo Album – as we always do the pics are Live and you will see the action was too!  Right Click and save each shot you want- that is a Free gift to anyone as a thank you from NWPR for letting us be a part of your lives by telling the story.

Now below you will see our indepth pics of top guys who any college coach will want to recruit.  We have their contact info so Coaches please email dirkknudsen@gmail.com if you want a copy of the roster-  it is free- never ever a charge for recruiting info. How about going inside Session 2 to watch us work and meet some of the best of the RDAF #AveryStrong College Football Showcase Session #2?  Let’s go!

Now we won’t mention everyone here this morning – we will continue analysis all through July; but here are some guys who for sure won the day!

Linebacker JJ Jerome came in with 1 offer and looked amazing on the day- Watch for the other kid with the ball to maybe blow up- he is Deacon Thibault and he wowed us all! Both kids are from Monroe High School in Washington.

Terell Mims of HIllsboro High School (Oregon) is normally a QB but he proved his talents at LB are just as valuable or more.

Carson Katen of Florence Carlton High School in Montana came into two sessions of camp and showed he is big, fast, and gifted. He is going to project into college after his 2017 senior year.

Taj Hoard of Gonzaga Prep is not the biggest linebacker in the region but his pass coverage and speed to the ball will keep him in the Top ranks all season!

Kenny LzFayette of Newport HS (WA) had a big day! The long haired 2017 LB is a STUD!

Deacon Thibault is from Monroe HS (WA) and has great size at 5’9″ and 186 lbs and is QUICK! He was a top performer all day at RB.

Mason Glover of Kentwood (WA) was smooth and proved his future is a bright one- the 2018 DB/RB was solid all day.

Fred Cooper of O’Dea is a physical Freak and it always makes us wonder what he will do next- he has offers and came in and no doubt will earn more as a result of a top performer kind of day!

Jamon Chambers 2017 Stadium High (WA) was hands down the most gifted athlete at camp. He is 5’7.5″ and nothing but speed and power. He made people miss all over the field and those that did not miss could not catch him. When will he land an offer? Man I would not want to be the last guy too- a special talent no doubt

Isaiah Ifanse of Bellevue (WA) is a 2018 kid and boy can he move. He is a RB and DB and has all the attributes of another great kid from Belleviue!

Brennan Barberich of Walla Walla (WA) came in looking to show he is back in top shape after his JR season was interrupted by an injury. At 6′ and 205 lbs he was one of the fastest guys in the camp and turned the corner against the best guys in camp and was gone. He impressed me more then anyone on the day all things considered- an offer for him seems to be close with q or 2 schools.

Mickael Johnson from Lakes High has a nice day- things to work on but showed promise no doubt.

LJ Lovelace of Lincoln HS (WA) was unstoppable in session 1 and followed that up with a big time effort in session 2 at linebacker. Clearly one of the best athletes out there and really a great 2 way player to recruit!

Caleb Weber – Chiawana HS (WA) – the biggest linebacker in the Region. He has 3 offers now and landed UTEP last month. He once again shined in all drills as we expected.

Mitchel Porter of Billngs West HS (MT) was one of the best looking athletes and showed solid skills across the board at Camp- He has 1 offer and is looking for more.

Chase Chandler of Bellarmine Prep (WA) is a 2018 recruit and has the size and ability to go all the way up to the Pac 12 if things keep tracking. A true talent that looks like he was born to play Linebacker

Jakai Cavness of Lakes HS (WA) was great on the LB spot. He had excellent run and pass coverage and showed a consistent ability to track the football and his opponent.

Bryce Bramscher of St Mary HS (OR) was solid in session 3 at WR and in Session 2 he looked good catching some high balls and deep balls – his 6’4″ frame is an asset and make him an interesting prospect!

Jack Holum iof Lakeridge HS (OR) – Jack is big and fluid. 6’4″+ and 235 lbs and he catches with intent and focus. A big target that should gather interest after this effort!

Jarrell Anderson of Bethel HS (WA) – This Class of 2018 phenom has 1 offer and at 6’5″ and athletic abilities at the top tier this kid has the whole package. It is not a matter of which Pac 12 offers him but which one does it first.

Alex Indelicato of Bothell (WA) this 2017 speedster has blazing quickness and projects really well as a slot. He really appears to be ready to compete in college – No doubt he is going to be an offensive machine this season

Nick Kaye #692 of Lakeside HS (WA) goes ariborne against Jarrell Anderson of Bethel and while he looked good Nick could not stop Anderson from going vertical!

Taj Hoard was a bruiser on defense – his ability to drop into pass coverage was notable.

DJ Hagler of Middleton High School (IDAHO) had a great day at LB and left all the coaches and media with a better appreciation of his school and his skill set!

Kela Marshall of Meadowdale (WA) was solid all day- this guys has excellent film and is very very explosive .

Jared Eisenbarth of Woodinville (WA) has 2 seasons left at TE and had great routes and hands at the Camp!

Ayden Ziomas of Glacoer Peak (WA) is a 2019 QB with so much upside- he threw to the TE/RB’s in Session 2 and was great!

Madden Tobeck of Cascade Christian (WA) is a 2018 LB of note who just keeps getting better and clearly has the skills to compete for offers the next 2 seasons!