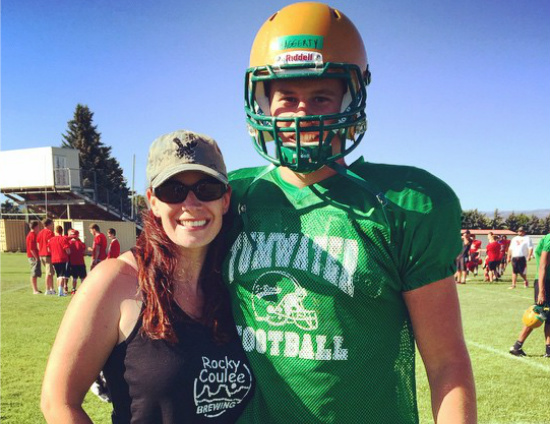 Sunday AM bright and early at the RDAF Football Showcase 30 plus colleges will wander onto the fields coffee cups in hand and clipboards ready to go!  Joining them will be between 200 and 300 of the best prospects in the Pacific NW who are coming out to compete and have a chance to step up their recruiting game.  With the Camp running all day long with 4 Sessions by position we are expecting quite a showing of top talent.  But in the mix will be new faces and lesser known athletes looking to move up and grab an offer or the chance to build a relationship with a college or two.  Here is a look at a few confirmed campers that we think could provide some intriguing moments and be athletes that have the coaches walking away smiling.

Look for more athletes each day until Sunday and PLEASE Get to CAMP – this appears to be the very best camp for athletes- the most colleges in the house with the least campers which means #lotsofreps and #eyesonyou !

6’1″- 170 lbs- The Cousing of DeAnthony Thomas has speed and is exciting-  A raw play maker we will enjoy watching as will all in attendance.  He had 22 TD’s last season and averaged over 100 yards of offense and had to work hard to do that!

The young gun from Sierra Vista HS in Vegas is in Eugene, Oregon and will finish his Senior year at Marist.  He can block and motor up field and likes that offensive spot so he comes into Camp as a wildcard at TE!

The speedy hitter from Hillsboro, Or was featured at NWPR yesterday and landed an offer today from PSU and has EWU in his pocket.  Could a Wyoming or U Mass or Boise State see enough in him at Camp to make a move?  It could happen!

Young man is a world champ in Judo and now under the tutelage of All American QB John Charles at Air One Football Academy he appears to poised for a breakout Camp!  A young gun from the mighty Tri- Cities that can sling it!

This kid came to the Nike Camp, showed out, we covered him, and Wyoming offered.  He is about to show some really good skill at a Camp Sunday and the Cowboys may not be alone in this interest.  He is big and agile and we think after the Nike Camp he is hungry for more!

Ok 5’6″ is not tall.  But a kid like this may be to fast and too powerful to stop.  This film is just too good-  watch it and see why we think this can be his day.  I have not seen moves like this since I watched Steven Long of Lake Oswego, Or- now at PSU.  Powerhouse back here!

Scott has crossed our path 3 times now in the off season and every time he looks better.  We saw him squat 500 lbs plus and his frame is angular.  He has long arms, a nasty streak, and while his technique has a ways to go college coaches will get an immediate look at a kid they can recruit and make into a big time starter.  There are MANY great campers coming out- Scott is one of them we think will turn some heads!

Hunter is a beast of a kid- a real specimen that passes the look test.  Beyond that he shows up in the speed and agility drills and stands out.  We can not find his Hudl Highlights- he is new to Tumwater and comes from a town of 800 in Pillager, Minnesota where highlight films were not done- there is something about this guy that tells me it is his time; so coming into camp we want to see his best! In fact he just informed us he just landed a scholarship from CWU!

Hunter Haggerty now at Tumwater HS was just offered by CWU and more should be coming! Seen here with his Mom!

The numbers now sit at 175 campers signed up.  The last camp, NWEFC, with college coaches went over 700 athletes.  The college coaches were spread out and while it was an awesome event it was tough to get a Rep in.

This event will have 4 sessions and the camp may only average 50-60 athletes per session and have almost that many college coaches in the house working with them.  Any opportunity to be with College Coaches is a great one but this folks looks like the perfect storm; a great place for the #TalentTsunami that is coming to Bellevue, Washington this Sunday.

To get to camp there is still time – go to http://www.RDAFshowcase.com and get lined up to come out.