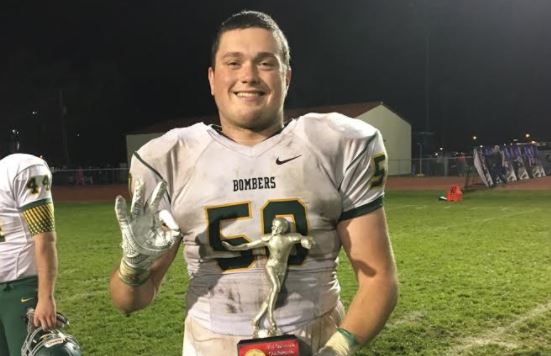 563
SHARES
ShareTweet
Get The Latest
Editors Note:  Richland High School has a rich football tradition and the last few years the team has been rolling.  If it were not for Camas the Bombers would have won it all last season.  The 24-14 loss in 2016 was a close well-contested game that had a lot of people saying that 2017 would be Richland’s turn.  Entering this week the boys from the Tri Cities and are rolling strong and undefeated.  Here is a story about one of the many talented athlete making things happen for them this season.

Richland High School has proven that it is one of the most dominating football teams in the state of Washington over the last 12 months.  The Bombers were the runner-up in the 2016 State Tournament last season and this season they are undefeated and have simply overwhelmed almost every team they have faced each Friday night. They have also persevered in two close games against top caliber opponents (Bellevue HS and Chiawana HS) to show that they have what it takes to win a close ball game in the fourth quarter. The team is absolutely loaded with studs at every position. One of the most dominating players on the roster is a Defensive Lineman. Jacobe Lee. is a 6’ 3” 260lb. class of 2018 Defensive Lineman from Richland High School in Richland, WA.  Jacobe also excels in the throwing events on the Track and Field team as he finished in the Top 10 in the Javelin at the State Track and Field meet as a junior. The big man is also doing a great job in the classroom as he holds a 3.68 GPA, with a 1090 two-part SAT score.

“I believe I bring energy to the field on the defensive side. I try to be a High Motor Guy. I try to lead by example in the weight room, in practice and on game days.”

All those qualities Jacobe shared with me are on full display in an action-packed highlight film from this season for week one through week seven that I have attached below. His explosiveness off the line of scrimmage is astounding. One of the quickest defensive lineman I have seen this season. I can’t believe how many plays he blows up behind the line of scrimmage on his film with sheer quickness, strength, high football IQ and a high motor. It is a very impressive film.

As the Class 4A State playoffs get started this week Richland High School is in great shape to make another deep run in the State Tournament as they seek to get back to the Tacoma Dome in December. Jacobe and his fellow Class of 2018 Bomber teammates have been on an amazing ride the last 4 years.

I think Jacobe is an OUTSTANDING Defensive Lineman who leads by example on and off the field.  These next 3 months Jacobe is going to see some colleges zero in on him a bit more and he is going to make a college coaching staff very happy. We want to wish Jacobe and his fellow Richland Bomber teammates all the best as they enter into the state playoffs and close out a great run by there senior class.

Here is a link to the hudl highlight film for Jacobe Lee. Please note that he runs a 4.93 Second 40 yard dash, Benches 330 lbs, and squats 495 lbs.  All of that awesomeness shows up on film!