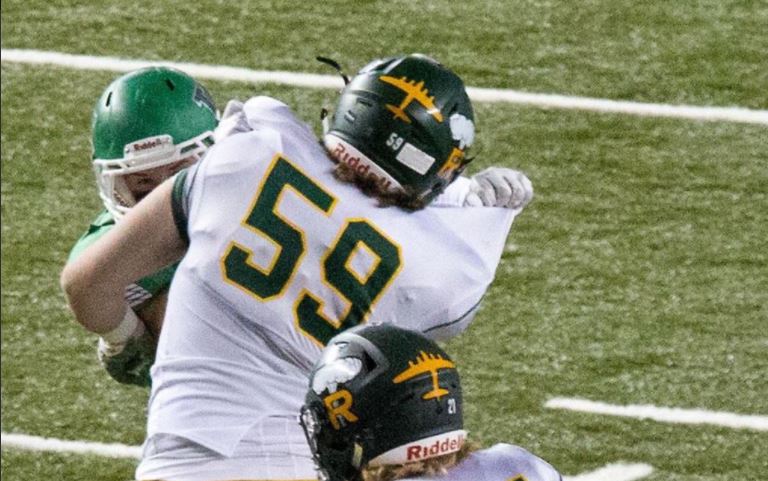 258
SHARES
ShareTweet
Get The Latest

There is no secret that I have become a big fan of Richland High School football in Richland, WA. I wrote three feature articles last season on former Bomber football players who were some of my favorite athletes I have met (Adam Weissenfells, Josh Mendoza and Jacobe Lee). Well, I am back at it again this year with my Richland High School pipeline for talent. The Bombers have proven to be one of the most dominating football teams in the state of Washington over the past 3 football seasons as they have amassed an eye-popping 37-2 win-loss record during that span. Aric Davison has ground his way into perhaps the best technical linemen in the NW and his size is now that of a D1 Center or Guard. He is a special player and a member of the NWPR PAC NW Top 50 fpr 2019.

The Bombers finished the 2017 season as UNDEFEATED State Champions for the Class 4A Division and were the runner-up in the 2016 State Tournament finale. This upcoming 2018 football season Richland High School looks to have another remarkable football season as they defend their title, they feature a great anchor for their roster as they have one of the most dominating players on the interior line in the State of Washington.

Aric Davison is a 6’ 3” 315 lbs. and in the class of 2019, an Offensive and Defensive Lineman from Richland High School in Richland, WA.   Aric has earned a 3 STAR recruiting ranking at this point from Scout 24/7 and the Tom Lemming Report.  Aric also is doing a great job in the classroom as he holds a 3.4 GPA, with AP
Honors Classes.

A few things that jump off the screen while watching Aric’s junior season highlight film (I have attached the link to his Hudl highlight film below) are his excellent footwork, great quickness, and athleticism. Aric also demonstrates an ability to get very physical in the trenches. Those tools that Aric possesses are
exactly what the college coaches at the next level will be looking for from an elite interior lineman.

I asked Aric about his feelings on winning the 2017 Washington State Class 4A Title this past December and he said “Winning state was an amazing experience to be able to do it with such a special group of brothers. It did not happen all at once it took a couple of seasons to get us to where we wanted to be able to win the number of games that we did. During my time so far at Richland High School we have gone 36-2 in the last three seasons. I have been a starter on the varsity as a freshman all the way to now as a Junior.”

Aric has spent this offseason getting his body ready for the rigors of the upcoming season and had this to say about the 2018 season ahead for him and his Bomber teammates, “This year will be a great season. We have a few returners, but we also have a bunch of new guys who are ready to shine and have been waiting for their shot. As a team, we are really focused on having a great spring football session and then going to team camp at Boise State University”

I am very excited to follow Aric Davison during the upcoming summer as well as the 2018 football season. Aric has an incredibly bright future ahead of him and he knows how to be a winner, he is a good leader with unmatched experience and competitiveness under the brightest lights at the High School level from playing in back to back State title games at the Tacoma Dome. We want to wish Aric all the best in his senior season and as he moves on to the collegiate level.

Here is a link to the hudl highlight film for Aric Davison: http://www.hudl.com/v/27scbW

Editors Note:  Aric approached me as a freshman starting for Richland and wanted to let me know he was going to be one of the best linemen in the NW when he graduated.  We went over what he needs to do, which included growing and becoming a great student of the game.  He did all those things and has proven he is a total winner!  This is a young man of vision and purpose and he is driven like all great athletes to be the best.  We are proud to see that he has done just that!