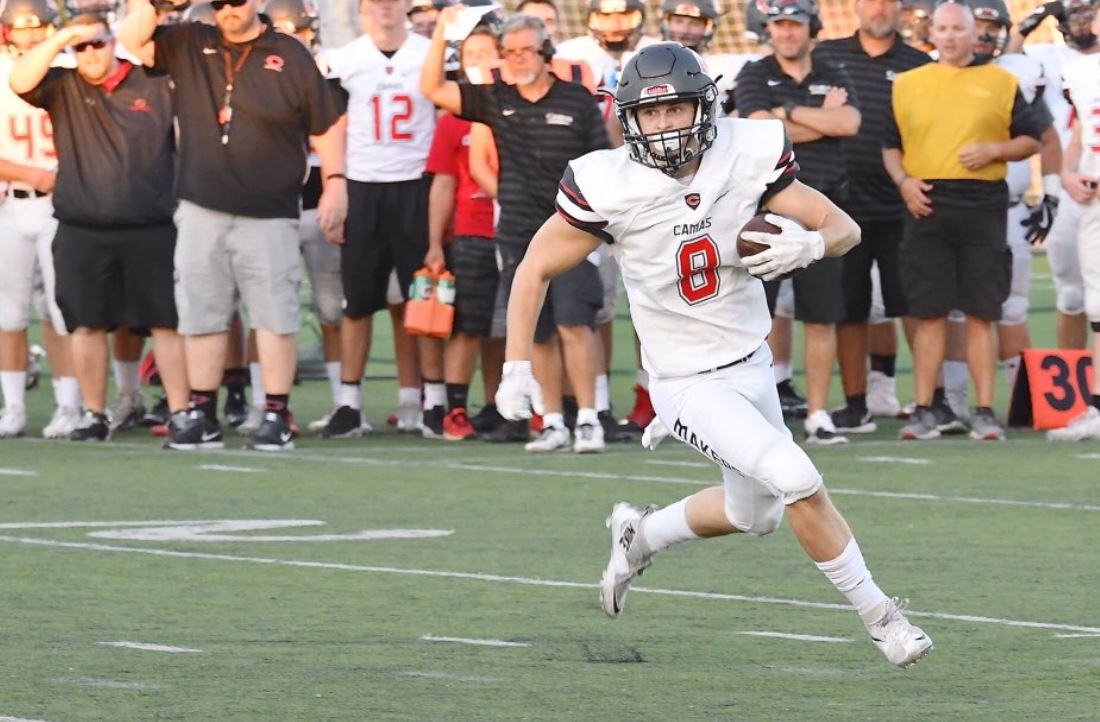 164
SHARES
ShareTweet
Get The Latest

There is not a better football team in the Pacific NW than the Camas Papermakers.  The Washington 2016 Champs are riding high again this season and the boys from Camas, Washington have handily beaten two of Oregon’s best this season as well as dispatching Idaho’s #1 team (Coeur d’Alene) two weeks ago in a great battle that wound up 28-24 in week 3. Camas Senior Ryan Rushall is a two-way starter and has impressed opponents, fans, and analysts as a solid College Recruit. In many ways, he epitomizes the Camas FB team.

This team has stared down team after team that has been laden with D1 talent.  Colson Yankoff, CDA QB, is a Husky commit and is a 4 Star QB and is rated in the Top 10 in the Nation.  The Camas defense held him in check and really bottled up his receivers.

When I think of Camas Football I think of the what it means to be a team.  From the moment I walk into Doc Harris Stadium to the moment I leave the teamwork is evident.  This community, these people, and their Papermakers are all cohesively moving together as one.  Off the field, the whole town works to make the Friday Night experience special.  On the filed Coach Jon Eagle has his teams crisp and marching in formation, the dance they do each Friday is perfection.  Each man is just as important as the next making this team unbeatable.

Incredibly the Papermakers just won their 55th game at home.  The State Champs are tough customers on the road to proving that last season beating Graham-Kapowsin, Skyline, Sumner, and Richland on their way to winning the Gold Ball!

What makes a great team like Camas work is not superstars but a lot of really great football players.  Camas kids are good athletes, are quick, and there is a lot of them.  They are coachable and buy into the offensive and defensive schemes/teachings that their incredible staff brings to the field.

Two standouts we love on the Camas squad are Seniors Ryan Rushall and Drake Owen.  These two are going to have very bright futures and both of them provide potent targets on offense.  Owen has 10 TD’s and over 400 yards already and Rushall has 2 Td’s and 205 yards.  Owen is flashy and fast and returns kicks. Rushall is a two-way starter and is one of the best Safeties in the League with two interceptions and a forced fumble to his credit.  Both epitomize the talent this team has and can hurt opponents on either side of the ball.

Another athlete that makes this team work is QB Kyle Allen who is in his first year as a starter.  Kyle has completed 87 passes for 1145 yards and 10 TD’s this season and is quietly raising eyebrows.  Camas has put out some amazing QB’s the last few years with Reilley Hennessey (EWU), Liam Fitzgerald, and Jack Coletto (AWU) all having awesome high school careers.  Allen is making a statement in his Senior year now that he has his shot.

Adding to Allen is a great team guy in Senior TE/DE Ja’Michael Shelton.  He has hooked up with Allen for 340 yards and 4 TD’s making a few all-star like catches this season.  His long arms help him out man opponents on offense and defense.

Rushall took a few minutes to talk to me about his team and why they have so much success.

“I feel like we have the best staff in the state, Coach Eagle is an amazing head coach and the staff he surrounds his players with is second to none. Eagle is just so smart and has a really high football IQ which transfers over to the players, our players are super smart and we just outsmart our opponents and we play as a team. Our defensive coach is just as smart, Coach Kielty, he is very passionate about what he does here, along with all the other coaches here. We just learn to play as a team and the players have a strong bond here at Camas,” said Rushall.

On his QB he had this to say, “Kyle has been in the program all 4 years just hasn’t had the opportunity because of the QB’sin front of him. He’s not as big as Jack (Coletto) or as fast, but he still gets it done well and he’s smart, he gets the ball out to his WR’s.  He is doing very well especially for a first-year varsity starter!”

Rushall is like most of the Papermakers in that he is hearing from smaller schools in terms of what next season might hold.  He indicates that Linfield and Colorado School of Mines are in contact with him.    We wondered which side of the ball the 6’0″- 180 lb. 3 sport athlete is looking to play in college?

“I honestly like both the same, I would be fine playing either one in College, but prob WR if it had to be one.”

These kids and this team to me are as good as it gets.  The focus is on winning and not on Hype or Recruiting.  Jon Eagle knows what to do with his college-bound players and returns calls and makes them when needed to get his athletes a look.  But that is never the focus at Camas making them one of the last best places to play, watch, or cover High School football.