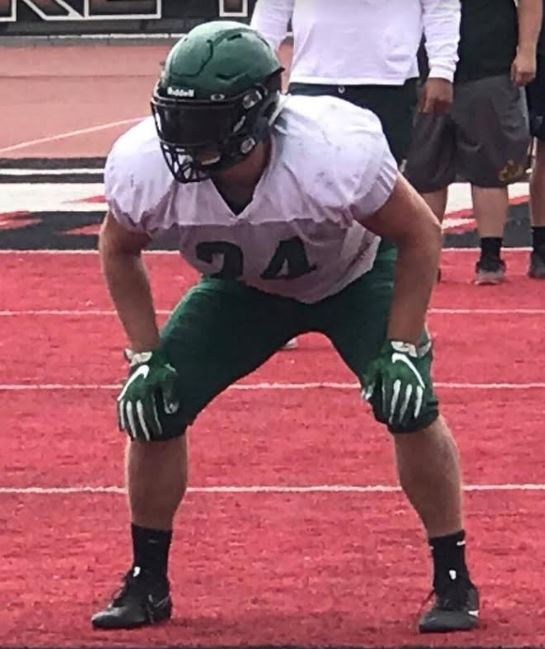 191
SHARES
ShareTweet
Get The Latest Silas Perreiah is a total machine so far in 2018 and shows no signs of stopping!

I love it when we find football players who come from small schools but have the ability and the determination to compete against anybody at any level. I think we have found exactly that kind of player in Silas Perreiah of Northwest Christian High School in Colbert, WA.

On 9/28/18 the 5’ 11” 210lb Class of 2019 Running Back and Outside Linebacker rushed for 455 yards with 6 rushing touchdowns in a 62-45 win over Oroville.  That is a huge night of production for the senior. I came across Silas’s highlight film two summers ago in the summer of 2017 when he had just finished his sophomore season and he really caught my attention at that time. I followed Silas’s progress throughout his junior season last year and he put up some impressive numbers. In 2017 Silas totaled 1,600 All-Purpose Yards and 18 touchdowns on his way to being named 1st Team All-Conference as a running back and a kick returner. Off the field he is doing solid work in the classroom as well, with a 3.10 GPA. Silas has a 4.58-second 40-yard dash, a bench press of 325lbs, squat of 435lbs and a vertical of 33 inches. Those are impressive measurables for sure.

I asked Silas what he considers are his best attributes to the game of football and to his team, he said “My best attributes I bring to football is being able to do it all out of the backfield. I can run with power, I can cut and make people miss, I can catch well, and I have the speed to break away from the defense. The best attribute I bring to a team is my work ethic and being an unselfish player. I am an extremely hard worker and lead by example with my work ethic and will make other players around me better.” When I watched his highlight film (I have attached the links to his Senior Season MID Season and junior season highlight films below) I see a running back who does not go down easily because he has a strong desire and the speed every time he touches the ball to get into the end zone.  In addition to his production out of the backfield, Silas also is a start on special teams. I also see a player who looks like a perfect fit at linebacker on the defensive side of the ball with good speed and plenty of physicality to play the linebacker position at the next level.

Like I said early in the article, Silas is a player I began watching as a sophomore and I love to see a player who improves at this great game and I think this season we are going to witness a very dominating football player all over the field. We want to wish Silas all the best in his senior season.

Here is a link to the Senior season MID SeasonHUDL highlight film for Silas Perreiah:

Here is a link to the junior season HUDL highlight film for Silas Perreiah:

Editors Note:  This kid is for real.  He reminds me of Sam McPherson who is running the rock at EWU right now and terrorizing defenses.  I could see Silas at Idaho, Montana, Montana State, or EWU for sure!  He is too strong and too fast for most DB’s and backers to bring down and with great speed, he is going to be a threat to go deep.  A terrific small school talent who is leading the entire Pacific NW right now for yardage on the ground and who can compete at any level.