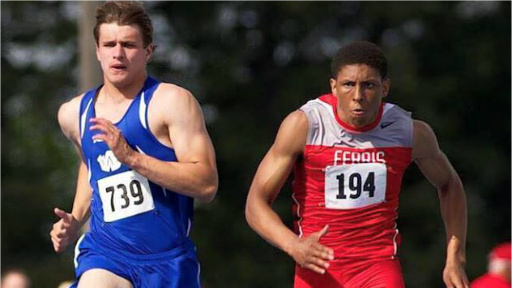 On October 23rd of 2014 I posted a story on Ferris High’s Jalen Hicks.  Basically we had been watching him for 2 seasons and knew he had great potential.  The 5’9″ 170 lb pure athlete was everything you could want in a collegian and truly he had the entire package of any great Pac 12 back.  In that post I asked the question “How Fast Is Jalen Hicks?”.  His HUDL footage late last year showcased speed beyond speed and yet colleges had been silent on this guy.  He cracked off a 380 yard rushing game and had many at that level on his way to an All League season.

Jalen Hicks of Ferris places 3rd in 3 events at the WIAA 2015 Track Championships.

Here is the issue.  His 4.5 hand time and lack of a verifiable laser 40 in the 4.4’s probably let him slip through the cracks where other West Coast backs did not.  Could he have played at WSU or OSU or even Oregon?  You’re damn right he could have!  But the Southern Oregon Red Raiders out of the Frontier Conference, the 2014 Natioanl NAIA Champions, are getting Hicks as the made the best offer to this young man.  Coach Craig Howard at SOU is a master as a Coach and as a recruiter.  They answered the call and took the time to recruit this young man and now they stand to reap the harvest.

Jalen Hicks took 3rd place in the 100 Meters in the WIAA 4A State Track Championships with a 10.76 100 Meter.  That is Pac 12 Fast folks.  Beyond that he took 3rd in the Triple Jump at 44 feet plus and 3rd in the long jump.  This is a special athlete and to us the jumping and speed just confirms any doubt he is a premier athlete at the highest level.  We want to give MAJOR PROPS to Jalen Hicks and wish he and the SOU Raiders the best of success.

They say there is a reason for all things – why they happen the way they do.  For Hicks it appears his home at SOU was meant to be. Remember parents and prospects it is always the fit and not the level that matters.

For Jalen Hicks he finished his High School career as a Champion and we could not be happier for him!  Go SOU!

Could or should Jalen Hicks have been a Pac 12 Recruit?
Yes! But none of that matters as he is going right where he is meant to be at SOU! A Place where he can do really big things!