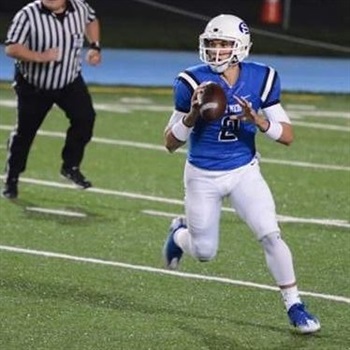 274
SHARES
ShareTweet
Get The Latest

Looking at the Oregon 6A Final coming up this weekend pairing South Medford against Clackamas.  It’s the Panthers VS the Cavaliers and each squad is loaded with talent and each team is looking for a State Title.   On paper, these teams are very very similar with each team having a big time Wide Receiver (Chase Cota #1 in the West and Cole Turner having Pac 12 offers), awesome running backs, and QB’s who bring the total package.  Each squad is balanced on offense and defense and we could play a Video Game version of this one 10 times and end up with each team winning 5. No one man on the field anywhere in the starting 11 guys is more important than the other men around him.  To win it all the game has to be a perfect team effort.  All in or #GoHome #2.  But we have to look to the field generals and what they bring because it will be their every decision that drives the Championship Bus.  So I am going to lean on them.  Tonight I am taking a look at South Medford’s Senior star QB, Robbie Patterson.  The 5’11”- 200 lb speedster is one hell of a QB and one hell of an athlete.

Patterson comes in with Thousands of yards to his credit and the kid has put a clinic on every week.  Last week was perhaps his most definitive effort.  Facing #1 Lake Oswego, the Panthers took the Lakers head on and repelled them in a game that was very competitive.  South Medford pulled away to win it 49-27.

Jake Dukart, Lake Oswego QB and Oregon State commit, lead his team with 275 yards passing and 3 TD’s and he ran for 36 yards.  He had a heck of a game.

Patterson answered with 200 yards passing and 3 Td’s of his own and 100 yards on the ground.  That was 10 carries and a rushing TD and folks that is 10 first downs.  That controlled the pace and the clock and it is how games are won.

Adding to that was Patterson racking 3 booming punts getting his boys some amazing position on the field and that Panther Defensive was stingy!  Patterson was everywhere!

Looking at the 4 games in the postseason so far it is clear that Robbie has worked a lifetime to make this possible for the team and his town, hell all the boys have.  They have scored 183 points against the best teams in Oregon and have one game left to win it all.  The team averaged 45.5 points a game and that driver, Patterson, has kept the bus moving in the right direction.

Stepping back from the Team aspects let me speak to you recruiters and coaches.  Here is a young man who brings this to your school should you recruit and land him:

Analysis-  Robbie Patterson has the speed and physical toughness to run the football and survive.  Like any great dual-threat QB he can run and that speed puts him among the best in the West.  His SPARQ score tells us he has massive core strength.  Throwing a Powerball 37 feet is hard- that requires amazing hip and core explosion.  A Vertical leap of 37 inches is legit.

Now for his arm.  It is powerful and his release is fast.  That ball comes out before defenders can drag him down and on film he is harassed and hit late as the ball is delivered.  The kid has terrific Vision and is a winner.

His height is probably the reason he is not a Pac 12 QB.  He does hold 3 offers from some solid NAIA schools so let me be clear; he is in a rare group to be a QB with offers.  Not many in the entire NW have offers of any kind.

But let me pose this-  if a kid name Jonathan Smith, who was about the same size, was able to walk on at Oregon State and break records in 4 years why not Robbie?  Are the football Gods trying to tell us something this week?  If a kid could be that smart and that good would he take a shot at being a walk on or a preferred walk on at a school like Oregon State?  Could he make it?  Yes, he could.  And I have to wonder with the news this week of Jonathan Smith being hired as the new Head Coach of the Beavers would he be receptive to a walk on prospect like himself or would he have an offer to give?

I am betting Coach Smith, who we are friendly with and hold the utmost respect for, will be at this game or have .  This will be a very interesting week indeed.  The fact that the big game is at Reser Stadium seems to be story like.    We hope Robbie get a good look from OSU and or Big Sky schools too!

Cole Turner will be tearing it up for Clackamas and he holds a Beavers offer despite being a Nevada commit.  Jaylin Parnell (6’0″-200 lb) who is South Medford’s running back and just a beast.  Both teams are loaded.

Other guys to watch just to name a few are:

Best of luck to both these teams in a game that promises to be a great one to wrap up the 2018 Season!  Play safe, heads up boys!