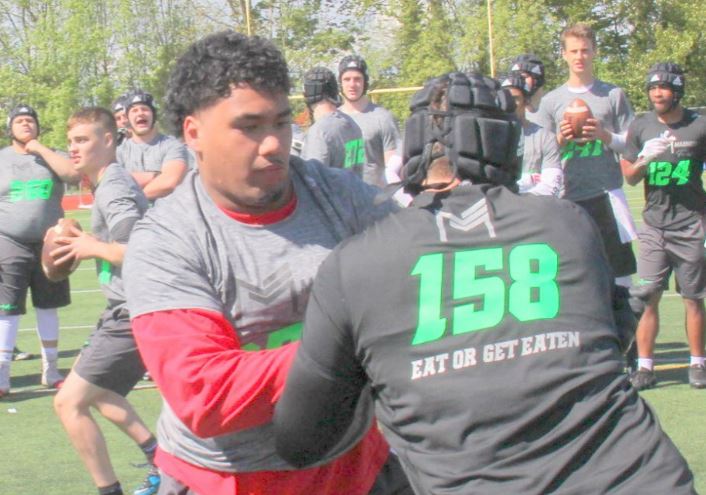 682
SHARES
ShareTweet
Get The Latest

Spencer Tatafu And Kaimana Wa’a Shine At Camp – Spencer Tatafu And Kaimana Wa’a Shine At CampMay Madness was a couple weeks back and we covered over 100 athletes at that camp.  Those kids and their stories will continue to shine through over the next couple of months here at NWPR and we expect them all to have amazing futures if they continue along the current path they are on.

Two linemen are rising up as recruits who Coaches will want to know about.  Both of them were among the All Camp List from May Madness and we want to mention them both because we believe them to be College level talent. Spencer is a big time linebacker, and honors student, and against the best Offensive Linemen in the NW he was unstoppable.  He got off the ball so fast and was so quick that he was tough to block as he went into live drills as a DE for the first time.  He is strong and violent and despite his stature, he proved too much for any of the linemen at camp.  He reminds me so much of Sadat Sulleyman who went to PSU as a LB and ended up an NFL player as a DE.  Coaches this guy should be on your “must visit” list. While I have watched this young star’s film a few times, seeing him live was impressive.  I did not see him lose a rep against much larger Defensive Linemen.  His pass set is way ahead of most players and he jumped rushing linemen at the point of attack immediately going after  them inside the frame. At that point his heavyweight wrestling champ wins battles.  His feet are quick and his core powerful.  He may look like a proto-type defensive tackle but I believe we are seeing the development of a big time Center or Guard.  Right now he is still an unknown.  But mark my words, this young man will be at least a Big Sky star and could go all the way- after all he has two more years left and his pops who they call “BIGG” is a legit big man.

Catch his interview with us at Camp right here.