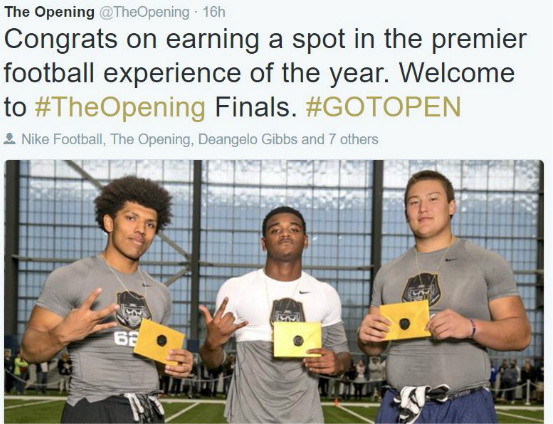 The Opening Regional Camp yesterday in Seattle really brought out the big guns as it should.  After all on the line is a ticket as valuable as the legendary Gold one that Mr. Wonka issued so many year ago.  The stage was huge and the boys came in loaded for bear.  Some of our best shined and others rose to the top of the heap!

Punching their ticket to the finals as somewhat expected were Graham Kapowsin Offensive Linemen Foster Sarell.  The 6’7″ monster is not only the #1 rated player in Washington he is the #1 rated Tackle in the United States and has everyone in the Country after him.  He took the O’Line MVP and will head to the Nike World Campus on July 5th to the 10th, 2016 for the finals.

Joining him is Eastside Catholic’s Hunter Bryant.  We predicted a year ago that this guy was going to rise the National Ranks to the top and he has done just that grabbing up handfuls of offers from the Nation’s best.  The 6’3″- 240 lb fast moving Tight End wowed the Nike Staff and earned his ticket as well.

Joining those too incredible players on the final list of 166 athletes invited will be Juanita phenom Salvon David Ahmed.  The two-way lightning-in-a-bottle athlete will be there and impress no doubt at all!  He was previously invited to the Final. We look forward to that as he can dominate on both sides of the ball.

Already invited in previous camps from Oregon are the Top 2 athletes in the 2017 Class in Marlon Tuipulotu (6’2.5″ and 290 lbs) at Defensive Linemen from Central HS and 5’10” 181 pound Defensive Back Elijah Molden from West Linn High School.  Both are expected to put on a real show at the Final.

Marlon Tuipolutu of Central High School in Oregon is committed to play in the US Army All American Game and a UW Husky Commit.

Elijah Molden is one of the finest athletes in the USA and has schools all over the Nation after him.

Many others rose up at camp grabbing top spots on the SPARQ Rating Board which is the composite score of the combine events the athletes compete in.  Anyone with a score in the 80’s or higher is a top-tier athlete.  Over 90 your excellent and over 100 you’re in the Elite group.  Here are the Top scores from The Opening combine!

Breaking these guys down we have to give a huge shout out to the entire staff at Nike Football and especially the Student Sports staff led by this guy Brian Stumpf.  He is a consummate professional and while all the kids and trainers talk about #TheGrind this guy wrote the Forward in the book about it.  @Stumpf_Brian is one of the most influential people in High School football and you all would be wise to follow him.

Look at this Board. Loaded with NW Talent and lots of new names climbing this board too.  Included among them are Parker Cardwell of LaSalle HS (OR) who made a name for himself, RJ Nelson of Hillsboro HS (OR) who has just landed his first 2 offers, and Zach Huffstutter of West Linn HS (OR).  Other stand outs were 6’7″ Abraham Lucas of Archbishop Murphy (WA) who also landed a recent offer, Caleb Weber of Chiawana HS (WA) who is on the rise still, and a pair of 2-way stars from Beaverton HS (OR) in Carson Crawford and Mataio Talalemotu who are both college bound.   Keegan Stitch of Snohomish HS (WA) and Jack Wendling of Squalicum HS (WA) both made the big board as well.  This was a big list of top scores from the NW and one of the best we have seen.

Now a word about UW commit Conner Wedington.  He racked up a 123.27 on his way to #1 on the big board.  He ran a 4.48 laser and for those of you that do no know that is rare in deed.  This just confirms his placement as a Top Athlete and prospect in the USA.  Boy the Huskies have landed some big time commits in he and Marlon Tuipulotu not to mention Hunter Bryant.  If they can land Ahmed and one or two other guys on this list they can win the day here in the NW.  Again look at the offense and defense that the Dawgs run and it is hard not to argue they make a great fit for athletes looking to move on to the NFL after college.

Conner Wedington of Sumner HS was the best of the bunch at the Opening Seattle Regional.

While SPARQ ratings require a prospect to be a freak athlete to score high they are no guarantee of top recruitment.  More of an indicator of the athlete’s potential to produce.  At the end of the day the intangibles come into play and Coaches recruit off of film and ability.  Ratings do not show heart, Football IQ, or ability at all.  So we look to the CAMP overall MVP’s that the Nike Staff led by master coach and football mind Matt James voted on.  These are the names that will perk the interest of Coaches all over the Nation.  James is one of the most respected names in all of Football and again if you ever get a chance to be in front of this guy and train make sure you listen.

Matt James of Nike Football is one of the most influential people in all of High School Football.

Many of these guys we already mentioned.  But Running Back Alex Indelicato rose up and took the MVP and got his name further up the board for sure.

Two guys that we have to give a special mention to are 2018 Linebacker Elijah Winston of Central Catholic (OR) and Xavier Banner 0f Lakes High School.  Winston put on a show and his film is here   His brother Lamar is an Oregon Duck now and this kid at 6’3″ and 220 lbs is going to be Nationwide.  Coaches now is a good time to apply the gas pedal on his recruitment- he is as they say “for Real”.

A word on Banner.  The shadow this kid seems to be rising out of is as big as his brother Zach (USC) who is the biggest football player in the world and one of the most talented Offensive Linemen to ever rise from the Pacific NW.  He appears bound for the NFL.

Enter Xavier who is 6’1″ about 215 lbs and competing during camps a defensive end.  He simply wins and was an MVP here at this camp as well as others.  His aggressive nature and drive off the ball and the grimace on his face tell the story.  He will not be dominated nor beaten.  That “X” factor seems to rise up out of his name and his lineage and I would give him high marks for his motor and skill set.  He is a speed rush Defensive End and Linebacker for the future and we feel will find a home at the next level and is closing in on his first offer.

Those guys won the day and helped themselves a ton.  We look forward to seeing them both progress this year.

Nike has a good thing going with The Opening and the know it.  The Staff makes it work and the events in my view are the best run events in the USA.  The Finals are such a big stage – the only advice we can offer is for all athletes, especially the guys making the finals, to stay humble and hungry.  An injury or bad grades or an off field incident can take away everything that has been earned and making it there does not make you different in that regard.  Life is hard and #theGrind is so  very real.

Huge congrats to all who attended the camp and made the day special!