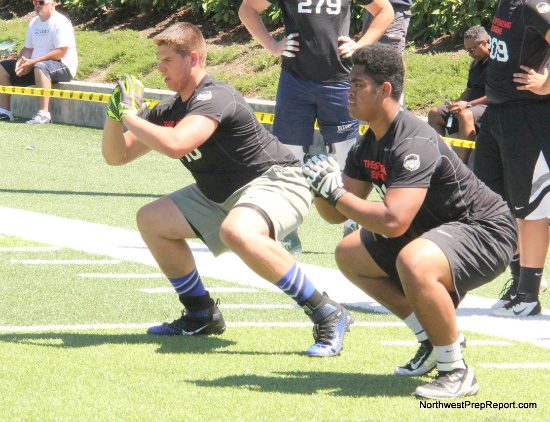 It was a terrific group of big men and the NW was well represented as many of the Regions best on both side of the ball came to battle it out.  The dynamic trio of O-linemen for the 2017 Class were there including Foster Sarell (Graham-Kapwosin), Cody Kanouse (Peninsula), and Henry Bainivalu (Skyline).  That bunch is going to have more offers then perhaps any 3 linemen we have ever had in one year.  Joining them on offense in the 2016 Class was big Scott Peck of Central Valley, Hunter Grade of Richland, Conner Crist of Tigard, and Derek McMurray of Tigard.  And that is just a few of the guys that totally stood out at Camp including Quazzel White of Lincoln in Washington; a 2017 beast.

Here is the film we captured and we will have more film coming out soon.

Finals after preliminaries above-