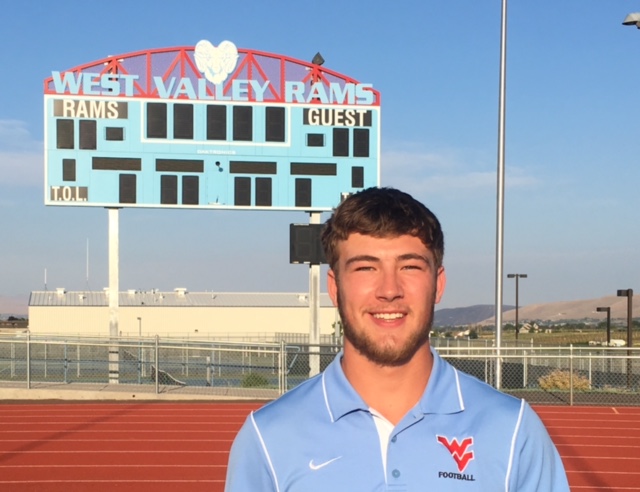 904
SHARES
ShareTweet
Get The Latest

As we move closer to the first day of the 2017 football season on August 16 th , I am on the hunt to
compile a list of the best Quarterbacks in the Eastern Washington region. Luckily for me, I did not have
to travel too far from home to find one of the very best QB’s in the Pacific Northwest. West Valley High School in Yakima, WA. has Brandon Battle, a class of 2018, 6’1” 210-pound quarterback who has put
together a very impressive resume. Some of his accolades include being voted 1st Team All-League at
QB from the Big 9 Conference his junior season and being invited to compete in the prestigious
Northwest 9 QB competition on July 30 to August 3.

That is a great honor for a QB. The Northwest 9 is a competition that selects the TOP 35 QB’s from Washington, Oregon and Idaho with the QB’s battling each other over 5 days to be named to the Northwest 9 (top 9 QB’s in the Pacific Northwest). The event airs as a TV series/documentary on Root Sports Northwest.

Statistically, the gunslinger from West Valley put up some great numbers last season. He threw for 2,872 yards and 28 touchdowns with a 62% completion percentage in his junior season last year. In one of his earlier games of last season versus Mercer Island, he put up an out of this world performance, where he shattered the school record by more than 100 yards with 447 yards passing in that game, with 5 TD passes as well. Those are some very impressive numbers.

Brandon is a very dedicated weight room guy, who is getting his body ready for the rigors of playing a football season. Brandon recently recorded a squat max lift of 440 lbs. this summer. That is moving some serious iron for a high school QB. Brandon spent his offseason training in Seattle with Empire QB Academy. In the classroom, he also shines with a cumulative 3.86 GPA (with some honors level college courses included) and a 1200 SAT score.

To sum it up Brandon is one of the strongest and one of the smartest QB’s in the class of 2018 (that’s a great combo to have).

I have reviewed Brandon’s highlight film from his junior season and I came away very impressed. A few of the things that jumped out to me on film are his ability to throw the deep ball with nice accuracy and touch. Brandon also throws very well on the move while keeping good mechanics.

One of the facets of his game that impressed me the most is his mobility in the pocket and his ability to slip and side step the
pressure and yet still step up into his throws and deliver with the heat on him. Brandon plays tough and with courage as well as composure and patience. He is also a very effective runner as well, totaling 5 rushing TD’s last season.

So far things have been quiet on the recruiting front for Brandon. But if there is one thing I have learned about college football recruiting is that for most of the high school football population it all comes down to your senior season. Brandon put up a great junior season and has had a great offseason doing all the right things he can personally do to prepare himself for what I expect to be an eye popping senior season this upcoming fall.

One thing I have enjoyed the most while doing these stories lately is that I get to meet young men and learn about them and get to know them on a one on one level. As I met with Brandon tonight for a 1-hour session to get to know him better I must say that I could not have been more impressed with this young man. He is a humble person, who comes from a great family, he has the hunger and dedication to improve each day and a great level-headed mental approach to the game of football and life. Brandon is not caught up in the hype and hoopla, he has embraced the grind of football and he just wants to go out and compete and earn everything. In my opinion those type of players are often the ones that continue to play this great game beyond the high school level.

College recruiters have their list of intangibles that they look for in any high school quarterback. After spending some time with Brandon, I must say that he checks off all the boxes on those lists of intangibles that college coaches put together. If you are looking for a quarterback to lead your team then you need to look no further than Brandon Battle. We wish him the best of luck at the Northwest 9 competition later this month and we wish him a great senior season with his team, family and his West
Valley community.

As I stated at the beginning of the article, I am on the hunt for the best quarterbacks in the Eastern
Washington region. If there are any quarterbacks or any players on both sides of the ball and special
teams as well in the Eastern side of our state who want an evaluation to feel free to email me the link to
hudl highlight film at dame22@msn.com and I will give it a look.